Getting the best picture by Stef Knowles 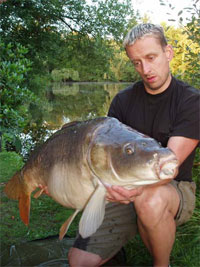 The one thing that never ceases to amaze me is anglers with a disposable camera or even worse no camera at all!

Now dont get me wrong Im not saying we should all go out and spend thousands of pounds on state of the art camera equipment, but lets face it, weve all spent a fair amount on tackle and in most cases are targeting the biggest fish we can manage so when that day happens surely you want a trophy shot that captures the size and beauty of the fish?

The one thing I am not going to do in this article is start recommending cameras, there are many places on the internet or in the high street that can do that far better than I can, also with technology moving so fast by the time youve finished reading this article the various manufacturers have probably released a complete new range of cameras.

Nowadays it is easy to pick up a very good digital camera for around £100; this will have a good amount of pixels and be perfect for what you want to achieve. You will hear the different manufactures go on about how many million pixels their camera has, and everyone will try and convince you that you must have the latest, most expensive camera with 12mp (mega pixels) or more but lets be honest not everyone can afford or justify spending that amount of money on a camera.

So why is this?
Its not what youve got its how you use it!

Well there are a few basic principles that I want to talk about that so often are over looked and are the difference between a great picture and one that youll wish you hadnt bothered with. Now some of these tips will only be relevant when fishing static as you wont physically have the time to mess around when you are stalking or roaming up and down river banks.

The first thing I want to talk about is composition. In a nutshell this is whats IN your shot. The key thing is think about where you are going to take pictures before you have caught the fish, once the fish is in the net or on the mat you dont want to be messing about trying to decide where is good, this is relevant whatever your style of fishing as it only takes a couple of seconds to scan your surrounding area for the perfect shot.

Once youve decided on the physical site for taking the picture here are a few suggestions of things to do to assist you in making things even better. 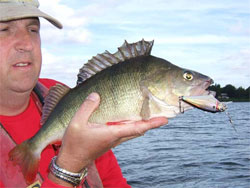 The other thing that will help you get a great photograph is to always use the flash, even in the daytime, this will help remove shadow from a persons face, if they are wearing a cap, and show off the fish to its fullest. Natural light is fantastic. But it comes from one direction so you need to remove the shadow.

On a compact digital camera like most of us will use they have a built in flash, these are good but sadly the depth they work over is limited, so when setting up for night time, or low light pictures always try to make sure you have a solid background no more than a metre or so behind you.

Digital cameras also have different quality settings; unlike the old film cameras where you just took the picture a digital camera will allow you to change the quality. When digital cameras first came out the memory cards that they stored the images on were not very big and if you took pictures at high quality then you would only get 20 or so images on to one card. Things have changed dramatically and now the memory cards used are huge and even with high mega pixel cameras at their highest quality you are still able to store a large number of images on a card, so always make sure that the camera setting is at its highest.

The final thing I am going to talk about is self takes, after all its guaranteed that when you do catch the fish of a lifetime youre going to be on your own and there are a few things you can get yourself, that wont break the bank that will mathis job so much easier. Clearly if you are going to be on your own a tripod is essential, you will see prices range from£15 upwards, I use a small extendable one that cost around£20, mainly because it packs up small so I dont have a lpieces of equipment carry around when I am trying to stay lightweight and mobile.

Now for many years I had a compact digital camera which had a remote control with it, I found this adequate and with a little practice I got to the point where I could easily take pictures using it. Then a friend let me try out his air-bulb setup, to say I was converted was a total understatement! Suddenly it was simple; you just place the bulb under your knee or foot and squeeze it when you are ready. If you have such a setting on your camera then set it to take multiple shots  what used to be called motor drive. You can then keep the foot pressure on the bulb and let the camera fire away as you adjust the way you are presenting the fish to the camera. This is particularly useful if there is likely to be a lot of glare from direct sunlight reflecting off the flanks of the fish. By altering slightly the angle at which you present the fish to the camera, glare can be considerably reduced, if not eliminated altogether. 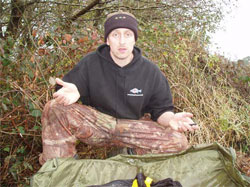 If you are fishing alone then you should always setup your shot this is especially important when you are fishing through the night as trying to work out your frame by head torch is a total pain, and is so much simpler when done in daylight and only takes a minute or two.

Firstly, as I mentioned earlier having decided on your location, now what you need to do is to set up your camera on its tripod with the bulb release system (I will assume you have taken my advice on this to make your life so much easier) and then take a picture of yourself you can pretend to hold a fish too as this will help ensure you have the width and height correct, although as you can see frommy picture its difficult not to look a little gormless. Its always wise to have the camera at a distance where you do not need to use the zoom as this will only complicate things later on trying to set it back to the same level, and you dont want to be cutting off your head or worse still part of the fish.

When you think you have finished taking your shots, put the carp safely back in the sling and go check the pictures. No matter how carefully you set up the shot, you need to be satisfied that they are to your liking. After all, you can't check and retake after the fish has gone back, can you!

Also a good thing to remember is that once you have the picture back home you can always crop it on your computer to remove any extra background that really isnt needed, as you can see below.

Also in the worse case scenario there is software that you can use to remove unwanted background, although this process is time consuming to do it is sometimes a necessity just to make your good picture great, the below picture was a

good friends personal best, the picture was taken without removing the clutter, now it took a while but a little bit of playing around sorted the picture out and concentrates your eye on looking at the fish.

I hope these few pointers help you improve your trophy shots.