My knowledge and experience of catching Carp on fly tackle has grown enormously over the last few months. I’ve managed to fit two sessions in each week, sometimes a whole day otherwise an afternoon and evening. As they say “practice makes perfect”, well I’ve not achieved perfection yet so I’ll have to keep practicing!

Andy’s first twenty on the fly

I’ve been visiting so many different waters, nine so far and counting. I always find going somewhere new very exciting, I have to approach each lake with an “open mind” and “feel” my way into each session. Observing the fish’s reaction to my loose feed gives me clues as to what to do next? If several fish are taking confidently and competing with each other it’s just a matter on topping up frequency with small amounts of feed. It’s an easy mistake to increase the quantity of feed as this often results in fish scattering as they follow the floaters as they drift downwind.

The amount of surface angling pressure also has an effect on the fish’s behaviour to my approach. The way Carp mouth the biscuits and my flies has seen me experimenting with alternative patterns. This has even seen me resorting to tying some flies that sit much lower through the water’s surface in an effort to outwit these cautious fish.

Finally the number of fish in the water also has an effect on my tactics, small numbers of large fish in a “Specimen Lake” requires a much more patient “softly, softly” approach than a “Match” lake where far more fish are present.

Lilies provide cover and fish can always been found near them

To illustrate how this all plays out I’ll describe an afternoon / evening session I spent with Jacob Harman when we visited a new Carp lake I’d been tipped off about by a friend. I had no prior knowledge of the stock density or possible sizes.

We found a nice quite area away from other anglers, so we wouldn’t be competing for their fish. There was a small patch of lilies to our left which offered some sanctuary if the fish need it. We had open water in front of us and to our right, so any fish hooked could be guided away from potential snags.

Not knowing how many fish were in this water I feed “little and often”, “you can’t take it out once you’ve put it in”. After maybe an hour the first Carp appeared in our swim, it tentatively took a biscuit and departed. We were both encouraged by this, introducing more feed frequently was necessary as it was being demolished by hordes of small Roach. On the plus side this activity was likely to be noticed by any inquisitive Carp in the area. A little while later, after introducing yet more feed, another two sizeable fish appeared and took advantage of the free snacks. After what seemed like an eternity we started to get frequent visits from several different fish, a mixture of Mirrors and Commons, and what’s more they looked a good size too!

Patience is a virtue

It’s often said that patience is a virtue and thankfully my patience paid off as gradually the Carp started to visit our spot more frequently and staying a little longer while taking a few more biscuits. This was all the incentive we needed to start fishing.

This was only Jacob’s second Carp trip so having got some fish visiting our spot it was his turn to try his luck. I trickled a few more floating Trout pellets into the spot, these had been sprayed with a fish oil to send out a flavour trail. I wanted to concentrate the fish directly in front of us now and get them taking the remaining freebies and Jacob’s fly.

Gradually the loose offerings were being taken but somehow the fish were avoiding making a mistake which made me question my fly choice, a “Deer Hair Mixer”. A quick change to a black “Hopper Popper” was a mistake because the Roach attacked it as soon as it hit the water and it spent far more time under the surface than above. Having noticed the amount of bread being used the previous evening when I did a recce of the water, I now chose a white “Deer Hair Bread” fly. This was an inspired choice it turned out because the next fish nailed it and Jacob now had his hands full guiding it away from the lilies. With my guidance he expertly played a beautiful Mirror Carp into a clear spot to our right, once in the net we both admired his new PB of 16lb 8oz.

My turn next, it took quite a while to draw fish back into our swim after all the commotion. I noticed each time I introduced more fed, fish would instantly re-appear, so they were never too far away! My chance came soon after a fresh introduction of bait; a lovely Common took my fly and shot out into open water. It kited to my right so I was applying side strain to bring it back from under a tree when the hook pulled, NO!

Jacob was back on the rod again and while I was away getting some more pellets from the car he made no mistake hooking yet another fish, a Mirror of 16lbs! The boy could be dangerous if he ever takes fishing up seriously. Finally as the light started to fade I hooked and landed a nice Common of 12lbs which saved my blushes.

What an enjoyable session, it wasn’t easy but that made it so much more rewarding. I will be returning as I saw plenty of bigger fish than we caught and the all looked immaculate. 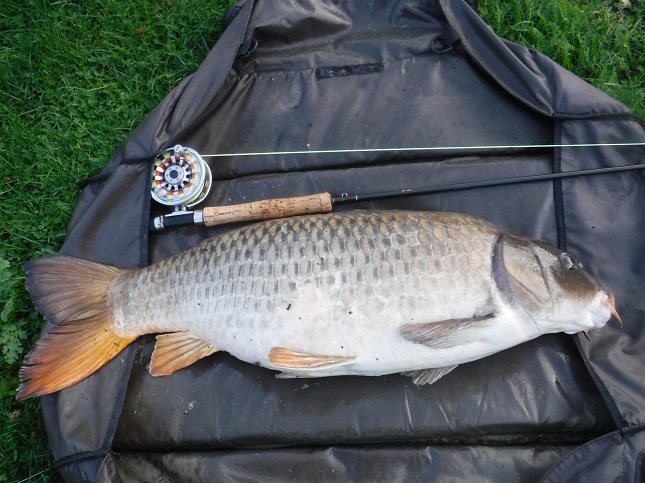 This 21lb Ghost Common is Andy’s second twenty on the fly.

Andy offers a guiding service for those who wish to learn more about “Lure Fishing & Fly Fishing”. For details visit www.thefriendlyfisherman.co.uk or phone 01892-528677