I’m back on track this month lure fishing, after several weeks of fly fishing which I’ve enjoyed immensely by the way. My friends and I made our now annual visit to Holland at the end of March; this has become a boy’s trip where we catch up with each other after months of only talking via the internet.

Our group consisted of four anglers, Andy Blazey and Rik Wesley from Cambridge plus James “the Doc” Gardner and myself. Once again we were traveling to Willemstad in southern Holland where we were hoping to hit the jackpot in our quest for jumbo Perch. The weather the preceding two weeks had been appalling with gale force winds pounding both the UK and Holland.

The first morning dawned bright and cold but promised to warm up later on; we excitedly waited in Willemstad harbor for Willem Stolk, the “Perch Magician” and his companion Adj to arrive with their boats. Our plan was to fish with each guide over the first two days keeping to our original pairings as we worked out how to catch the huge Perch that have become an obsession of ours over the past few years.

We hadn’t expected to see the water so dirty, the gales and rain had stirred the water up so badly that Hollands Diep, the area we were fishing had less than 3” visibility! This was not something we’d ever experienced before, nor might I add the absence of wind! James and I were in Willem’s new Lund boat which is an amazing fishing vessel; it made the boats we regularly fish in here in the UK look like playthings from a bygone age!

We would be casting 9 and 10cm soft plastic shads or grubs, attached to 7, 10 and 12g jig heads, towards the shallows searching for lone aggressive pre-spawn Perch that would fend off these interlopers. Willem slowly maneuvered the boat along the shallow margins in a large spawning bay just down from some wind turbines. Today it produced seven small Zander for James, plus a bonus Roach and a succession of short takes and lost fish which showed the fish weren’t really hitting the lures precisely. As always I take a few hours to get into my stride and today was no exception, I finally got my act together and put three Zeds in the boat but I only had three takes which showed how well James had fished. Andy ‘B’ and Rik had very much the same experience catching a few Zander but no Perch!

The following morning we were greeted with a blanket of fog which showed no sign of clearing anytime soon. It was mid-day before the harbor master allowed any fishing boats to venture out onto the river. Being a busy trade route for cargo vessels traveling through Holland and up into Germany, safety is a consideration and heavy fines are meted out for those who flout the rules.

Today James and I are were fishing with Adj, Adj always works hard to put us on fish, his boat might not be as big or as sophisticated as Willem’s but it’s more than adequate, in fact if James and I ever had the need to own our own boat it would be a duplicate of Adj’s. We joined the others in the spawning bay but kept a respectable distance; the bay is off the main shipping channel and covers about 100 acres, so no need to get too close. James was determined as ever and settled into his rhythm of cast and retrieve, systematically searching every inch of the water in front of him. I always find it difficult to stick to just one style of lure for too long, unless we’ve established it’s the right pattern to fish at the right depth, at the right speed, I’m afraid it’s colour is my last consideration. So I was playing around trying things that James wouldn’t be using in a vain attempt to find the “lure for the day”. I picked up a stray jack Pike while using a Chatterbait but sinking Rattle Baits, spoons, tail spinners and a variety of shads, in various colours had all failed to trigger any further action. In the distance we saw Rik Wesley hook into a good fish, but what was it? As the landing net scooped it out we guessed it was a good Perch but when Rik punched the air we knew it was something rather special and at 6lb 4oz, a new PB, it certainly was! 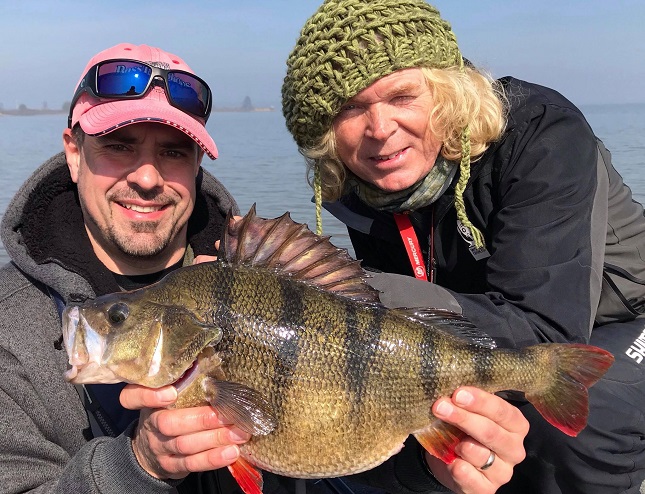 Our next move took us to an area in front of some wind turbines but we failed to get any takes there but nor did any of the other boats, it was beginning to look like another grueller was on the cards. We tried other areas but by early afternoon I was totally out of ideas and suggested a change in tactics and location were in order. So off to the “dumping grounds” we went, the “dumping grounds” are an area that has many features that draws fish throughout the year, it consists of humps and gulley’s created from the spoil deposited from dredging the harbors that line the upper river. I fished vertically for Zander while James stuck to what he does best, he continued casting in an effort to “finesse” some Perch out. Up until now Adj hadn’t been fishing but we urged him to have a go, if he was catching we’d know we were on fish at least! Adj set up a Dropshot rod but attached a small deadbait rather than a soft plastic lure. Adj skillfully steered the boat to each of his waypoints, these mark his hot spots amidst this vast mid-river area. 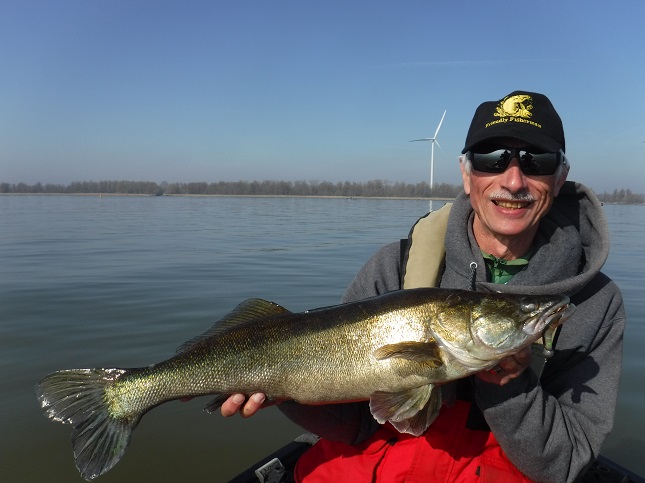 Andy with a “Black Zander”

It didn’t take long before Adj struck into a nice Zander, shortly after this I lazily struck into a fish which caught me knapping and managed to slip the hook mid-fight. I was suddenly alert and poised, ready for action “like a coiled spring” I didn’t have long to wait before my Megabass X-layer lure was slammed. The aggressive culprit was a “Black Zander”, a male fish that was ready to fight all comers! I love catching Zander so much and I wanted another, so my lure was quickly sent back into the depths. When your lure gets hit right under the rod tip, in such shallow water as this, we were fishing 20ft to 25ft; it’s shocking and sends a jolt right up into your elbow! Four takes and three fish in 20 minutes saw me eager for more but unfortunately that was it for now. Adj had also caught a couple of fish on his Dropshot and bait method while James had missed one take on the “vertical” but his heart wasn’t really in it, it was time to move on again.

Back to the spawning bay

We were keen to finish the day back where we’d started, “it only takes one special fish to turn a dull day into a red letter one”, that’s always been our mantra that keeps us trying until the very last minute. A Zander takes my tail spinner shad but that’s all we could muster despite our best efforts today.

The boys were on cloud nine when we finally caught up with them that evening, they had left Hollands Diep and ventured further down river into Haringvliet which had been much clearer and they had caught several more Perch, including a new PB for Andy Blazey at 5lb 2oz! Andy had in fact managed far more takes than all of us put together so I was keen to get the low down on exactly how he’d been fishing, speed of retrieve, jig head size and finally colour of lure. 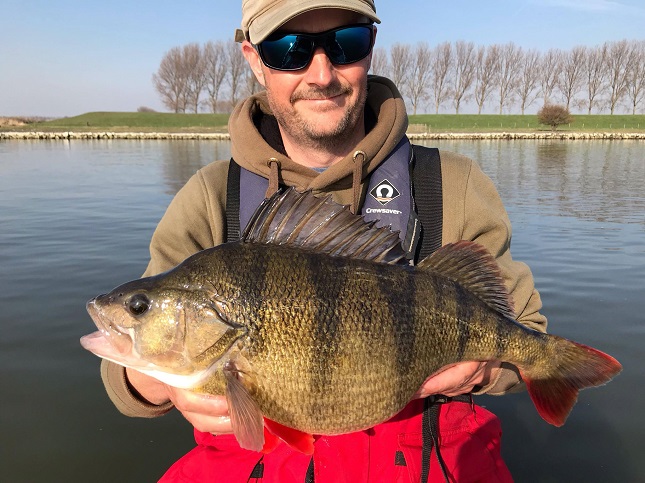 Our last day saw me fishing with Andy ‘B’ in Adj’s boat while James and Rik were going with Willem. It’s good to “pick and mix”, it keeps us on our toes, besides we don’t get to see each other that often and today I was going to see how Andy was fishing, as the fish were definitely responding to his presentation. I was first into action with a small Perch of 3lbs, anywhere else and I’d be ecstatic but here it’s not worth a picture or weighing! What a relief after yesterday, the water’s definitely clearing, Andy catches a couple of Zander and misses a couple of takes so his method is still working. After an hour without any further action it’s time to move on, under the motorway bridge into Haringvliet and we head to the area that produced Perch for Andy and Rik yesterday. We slowly work the marginal drop off; it’s between 1m to 4m so we’re using 5g, 7g and on occasion 10g jig heads. Andy’s on fire with two jumbo Perch of 4lb 10oz and 4lb 6oz while I can only managed a mid-double Pike, d’oh! The bites seem to peter out by mid-day so we end up trying several other areas before I’m done and can’t concentrate any longer. Anyone who thinks fishing is relaxing should try lure fishing, I was exhausted. With time running out we sped to the “dumping grounds” where I picked up two last gasp Zander and that was the end of another Dutch expedition.

James, Rik and Willem had enjoyed a more fruitful day having ventured further down into Haringvliet, between the three of them they’d boated a dozen big Perch to over 5lbs. James got his mojo back after his blank the previous day catching the lions share, so normal service had been resumed!

The conditions were improving by the day and we knew that the following week it would be perfect and so it proved. On our return to the UK we kept a close eye on Facebook for reports of specimen Perch being caught by our friends as they fished the last few days of March, before the seasons close. By the time you read this ‘Carl & Alex Fishing’ YouTube channel will feature a session that Alex had around this time, you’re sure to be impressed.