I didn’t realise how much I’d missed my fly fishing until I started again. Last summer’s heat wave had enforced a break from the beginning of June until the Sunday before Christmas. You will have read in last month’s article how visits to Stowting and Hazel Copse had reignited my appetite. With this momentum I couldn’t wait to explore new fisheries and revisit some old haunts.

Peter at Thornwood has really worked hard to get his fishery noticed. I hadn’t been there for a few years so Peter had lots to tell me when James Gardner and I arrived on a very cold and miserable day.

The “stalking pool” was now home to some Sparctic Trout, an exotic hybrid species that’s a mixture of Arctic Char and Brook Trout. The “long lake” is mainly stocked with Brown Trout, including some beasts which will have been introduced by the time you read this, although there are some escapee Rainbows from the “top end” that’s netting off and heavily stocked with small Rainbows as a beginners pool. The larger “main lake” is stocked with Rainbows, Goldies and Tiger Trout! As I said Peter has a fertile imagination so it’s worth checking Thornwood’s Facebook page to see what he’s up to.

Our visit in mid-January coincided with some rather bleak weather, but what can you expect it is winter. The main lake is my favourite water at Thornwood so I started here with my now “go to method”, of sink tip line with washing line system. My team of flies consisted of mini Tequila booby - top dropper, Cormorant – middle dropper and FAB Blob – point fly. This searching technique has produced wherever I’ve been recently, as long as the fishery allows droppers, not all small waters do, so check if you’re not sure. 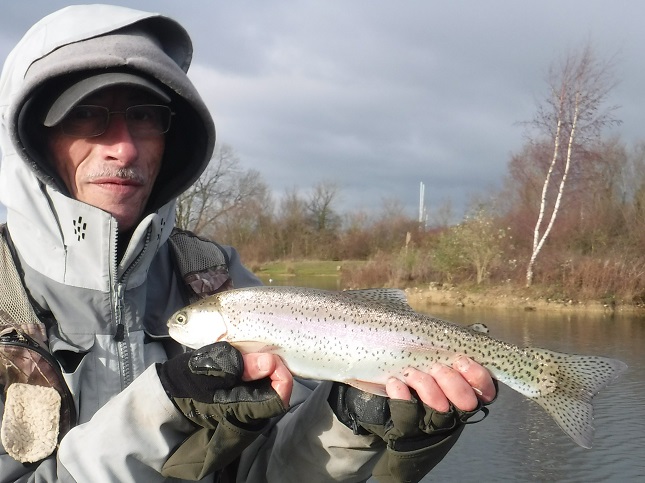 Fishing around the margins, an area I’ve been having great success on other waters recently wasn’t going to work as it was far too weedy, so I had to come up with another plan? I was considering trying an indicator and Buzzers, cast our across the gentle ripple, to fish the middle of the lake. This would carry my flies in a very subtle and natural way over the deeper, weed free water. I set up my new team which consisted of a Blob – top dropper, Black Buzzer – middle dropper and Olive Buzzer – point fly. I thought I’d try a couple of casts without the indicator, just letting my flies “free fall” through the depths to see if it was in fact, weed free. First cast and every thing’s going swimmingly, I’ve counted down 30 seconds, I make two long slow pulls to lift my flies up through the water column, then pause letting then fall again, a few seconds later and my line lifts smoothly off the water by my rod tip indicating a take, “fish on”. A feisty Rainbow puts up a good scrap and I notice my Olive Buzzer in the corner of its mouth as I net it. I’ve now found a method so forget about using the indicator, by watching the line tighten as I retrieve and slacken as I pause I become mesmerised watching for takes, which when they come sees me reacting like a coiled spring. I add another couple of Rainbows and a very slim Brownie to finish my bag. James managed to scratch a few out too so we’re happy to finish with honours even.

I’d never seen this fishery let alone fished it, a good friend Sean Brooks had tipped me off that I should pay it a visit. I arrived on a bitterly cold day with a keen North Westerly wind almost cutting me in half. Unsurprisingly I was the only fly angler there in fact I was the only angler on the whole complex. Chequertree has several well-kept Carp lakes with lakeside lodges and caravans making it an ideal weekend retreat for anglers and their families.

The Trout Lake is small at about 1½ acres in size; there is a section of deep water that provides sanctuary from anglers and extreme weather. This area looked very inviting; Sean had informed me that he’d caught using a Di-3 line with either Black Humungus or Black Tadpoles. Alternatively a floating line, long leader coupled with a team of Buzzers, mainly in Black worked as well.

I decided not to fish into the wind, for no other reason than my comfort. My chosen spot allowed me to cast across the wind, which would bring my flies across the path of any fish moving into the current, created by the wind. I tackled up with the now familiar sink tip line and washing line team of flies. I must be careful not to become a “one trick pony”. 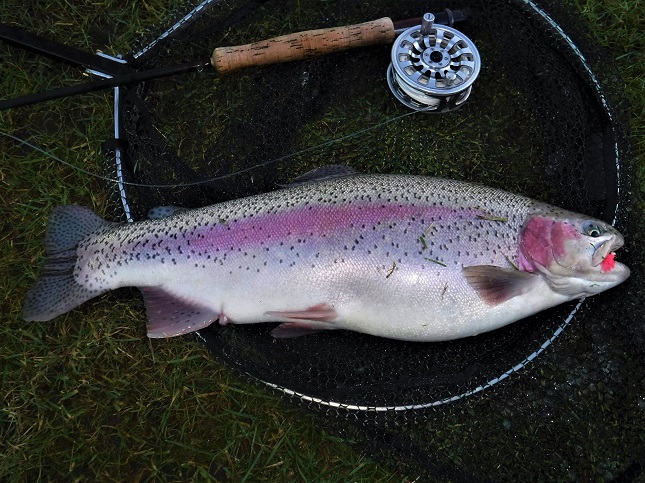 An unexpected lump from Chequertree.

After a couple of hours I’d only managed two takes, landing one and losing the other. I then moved up-wind into a more sheltered area where I’d seen the occasional fish roll. No sooner had I moved when a fish rose in front of my previous casting position, d’oh! A speedy cast down the margin, followed by a fast figure eight retrieve saw my line tighten and I set the hook into a lovely Rainbow. A few more casts from my sheltered position confirmed I was in the wrong place; I had to go down wind into the bay where the breeze was being funnelled. I could easily cast into the opposite margin from my new position, I allowed my flies to drop into the gully that I imagined was mid-way between both banks, my slow retrieve was suddenly interrupted by a savage jolt, “fish on”. Over the next hour or so I had either a take or a fish on almost every cast, what a difference! By late afternoon I was satisfied I’d cracked it and was considering packing up when several fish rolled over the deep water mid-section. I quickly moved so I could reach the spot where I’d seen the fish, a quick cast and as my flies settled on the water I started my retrieve immediately. Three fish in as many casts, two of which were over 5lbs, completed a very successful day.

What an amazing session, what was even more interesting was the fact that the two largest fish both took the Cormorant on the middle dropper, in fact they were the only two fish I caught on that fly, why I don’t know, one to ponder on?

I prefer to take the imitative approach whenever possible, in fact I usually opt not to catch fish on lures or attractor flies as I don’t enjoy the faster retrieves and frequent casting it usually involves, it all seems a little too hurried for my liking.

Now using flies that imitate food is all very well when fish are feeding but when they’re not it’s a rather pointless exercise. Using lures and attractors can trigger fish to take, either out of aggression or possibly out of curiosity? Whatever the reason you can catch even when fish are not feeding, very much like my lure fishing in the winter, when fish spend long periods resting between feeding spells. 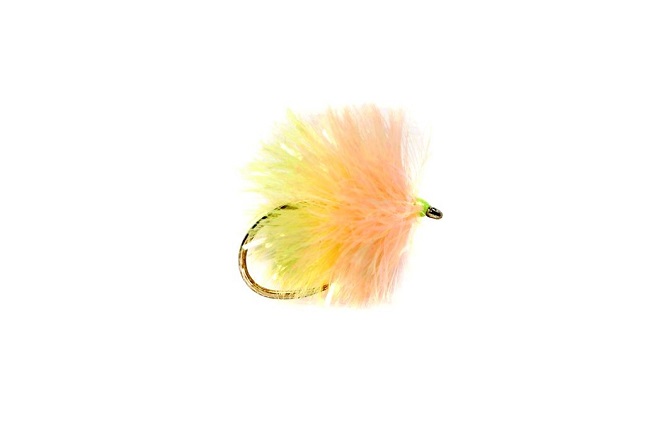 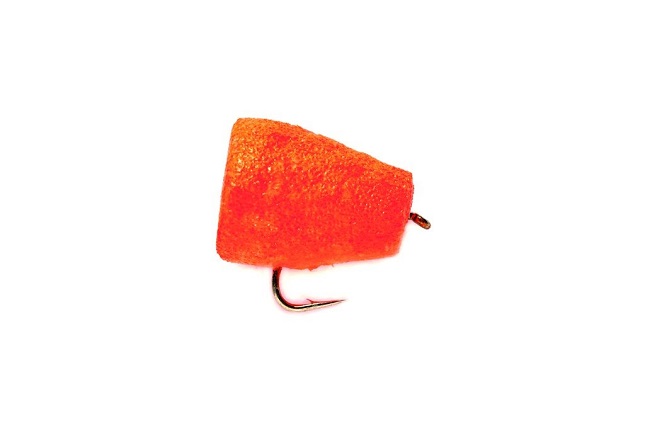 My recent fishing has got me to thinking a lot about what I’ve observed i.e. fish breaching in open water or catching fish in open water far away from the shallow margins where I expect to find fish, if they were feeding. I’m quickly coming to the conclusion that often times the Trout are not feeding but rather they’re resting, but not near the bottom as most predators do, but suspended out in open water and often quite near the surface, but why? I can only theorise that they’ve found a comfort zone, a layer of water at a temperature to their liking, maybe?

It’s very hard to break away from thinking you have to find feeding fish to succeed, winter fly fishing is very different from other times of the year, obviously it’s colder but the fish can be caught if you are prepared to adapt. I’ve experimented a lot with teams of flies fished under an indicator recently, spacing my droppers only two feet apart, thanks Gary Collins for that tip, at 2ft, 4ft and 6ft interestingly the most productive depth has been 2ft! One of the most successful flies has been the infamous Blob, a lure or attractor, whatever term you prefer. I have to admit I’ve been rather late in realising how effective Blobs can be, and not always in brash colours which saves my blushes somewhat.