A change is as good as a rest

With conditions at Bewl deteriorating with the influx of new water being pumped in this added colour which always makes lure fishing less effective in my experience. I decided it would be a good time to take a break, let’s face it my results when conditions had been perfect had hardly set the Pike world on fire, so I’d give the water a chance to settle before returning for some more punishment.

I considered my options, Rutland, Grafham, Farmoor? I was feeling lazy and uninspired, a change was needed. With plenty of time off over the Christmas period I opted to dig out my fly tackle and visit some local small waters I’d neglected recently.

This small clear water is a bit “under the radar” a far as mainstream fly fishing goes. Situated between Ashford and Folkestone, Stowting is hidden down a series of country lanes in the chalk hills overlooking the Kent countryside. Access is easy as the fishery lies only a few miles off the M20 motorway. 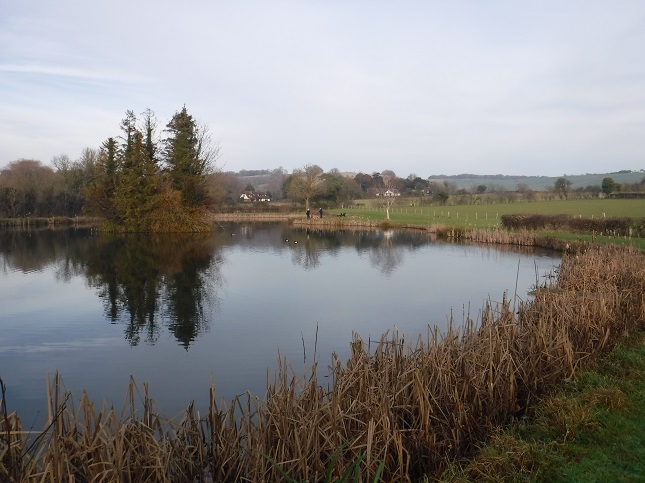 At about two acres it’s a bit small for my liking but it does offer fantastic visibility. You normally have to travel west to Hampshire to get this water quality. The chalk stream fed lake has a healthy amount of weed which supports a mixture of fly life. I was told by the two anglers on my first visit that hatches of Midges and Sedges provide good surface action, especially in the spring and on summer evenings.

On my two visits, yes it was that good, I experience superb sport catching several hard fighting Rainbows and a bonus Brown Trout. All my fish were caught in the shallow end which is around 3-4 feet deep with a fair amount of weed close to the bottom. I had to concoct a presentation that would allow me to fish close to the bottom without snagging the greenery. The normal combination of floating line, long leader with a weighted fly was not working for me. I had to retrieve too fast to prevent catching weed. Unweighted flies were not attracting any interest either, I felt I needed to trigger a response by “twiddling” my fly, using a fast “figure eight” retrieve and unweighted flies were lifting too high in the water.

A change of fly line was required but what should I choose? Intermediate or Sink Tip, as I was treading my Sink Tip line through the rod rings the angler closest to me hooked a fish on a dry fly! Oh dear was my tactic doomed to fail before I’d even started? Regardless I continued to tackle up; my fly was going to have some buoyancy in it so it would hover just above the weed.

he sinking tip of my Lee Wulff line was going to provide the depth; a fast “figure eight” would draw my fly down close to the weed, occasional pauses saw the fly slowing rise up before I commenced the retrieve. The takes all came just after a slight pause, having found a successful method I caught my limit of four fish, “catch and release” too quickly. It had taken me an hour and a half to work out how to catch my first fish and less than another hour to catch the rest! 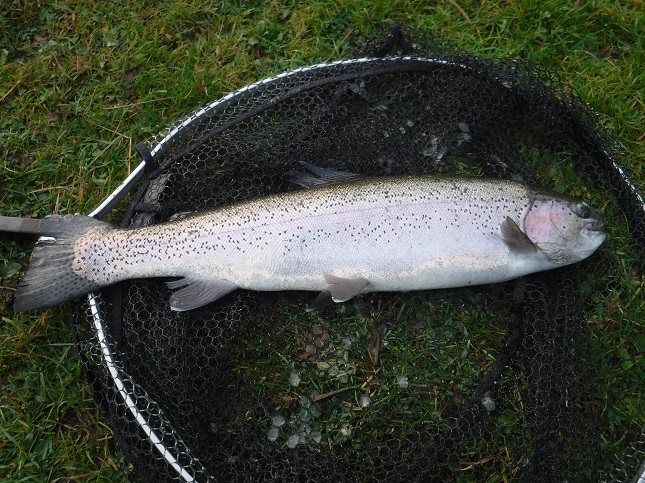 Fired up by my previous visit I had to return a few days later. I tried fishing the dam end where the water was deeper and presented weighted bugs to fish I could see, but all refused my offerings. I reluctantly headed towards the shallow end above the island; the other two anglers were fishing here too but on the opposite bank. I didn’t want to encroach on their fishing so I retreated to the dam end.

I’d tried hard to find another way of catching but by mid-day I’d failed, so reluctantly I had to go back to my winning combination of sink tip line and FAB blob fly. Would it work a second time? Casting towards the island from the dam it didn’t work, nor did fishing the channel down my side of the island, eventually I had to go to the shallow end. I’d noticed both the other anglers had bagged fish in this general area. I didn’t take long before I caught three fish, not wanting to finish too early I experimented with dry flies but could not raise any fish. So back to what was working and a couple of casts later it’s “fish on” and my day is over.

Stowting is a small water which can cater for up to ten anglers but I’d prefer not to fish there with more than half a dozen. It’s ideal for a few friends to get together and have a “boyz days” out or maybe a family and friends. Contact details as follows, Water Farm Stowting, Ashford TN25 6BA 01303-862401. The owner Carol asks you to book in advance on to prevent overcrowding.

Buoyed up by my success at Stowting I was up for a challenge so decided to visit another old haunt. Mark Bryant was going to join me so we needed a venue that “A” allowed “catch and release” as neither of us wanted to kill fish, “B” where we would stand a chance of catching and “C” was within easy reach for both of us.

I selected Hazel Copse near Horsham in West Sussex RH12 3AF contact 01403-822878; I’d fished here a few times but not recently. The owner Wilf has two well stocked lakes that have always been kind to me. I was keen to see if my “sink tip” and FAB fly technique would work here too? As Wilf allows droppers I attached a small black Diawl Bach on one 5ft up from my point fly which was a Biscuit FAB. We both elected to fish Lake Two; the water was reasonably clear with 3-4ft visibility. After a few casts on this still, cold and damp morning I was already starting to doubt my presentation. Would the fish be active enough to chase? I changed my point fly to a weighted “hot head” Damsel nymph, this would fish deeper and put some angle in my leader, which meant my two flies would now be searching two different depths at the same time, sneaky.

A short while later and I’ve got itchy feet I was going to move, it’s a mistake to stay too long in one casting position at this time of year, unless you know there are fish in front of you. With the cold water fish slow right down and spend most of their time holed up in tight areas, you cannot rely on them coming to you, so you have to go and find them. Don’t make the mistake of moving too far each time as you could easily bypass their holding spot. I always like to cast along the bank at this time of year as this sees my fly in the most productive water throughout the cast. I was going to move, I cast my flies out into the lake so I could reel my line back onto the reel while under tension when suddenly everything locks up “fish on”, I’d fluked a fish! Now I’m confused, what retrieve should I be using, “slow and low” or “fast and shallow”? 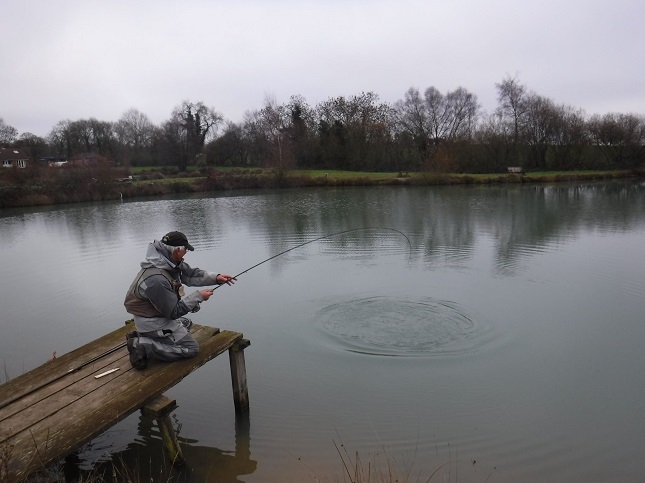 Eventually after fishing several different casting spots around the lake I found my original set up of sink tip and FAB fly was THE method after all, but only if I used a short series of slow strips rather than my normal figure eight retrieve, how strange. Sometimes I could almost sense a fish before I got a take. By watching the line from my rod tip to the water’s surface I would watch it lift as I retrieved and fall back each time I paused, sometimes it would hold up a little too long indicating a fish was mouthing the fly, if I struck then I missed the fish! What I found I had to do when this happened was to retrieve very fast to take any slack out of the line before setting the hook. Once I’d worked this out I started to catch regularly. After a short lunch break we continued fishing Lake Two, I was now casting into previously unfished areas as the fish had definitely gone off, I winkled out a couple more but it was painfully slow by now. Time to try Lake One!

For some reason I’d never fancied lake one? So I wasn’t expecting it to be any better, wrong! My first four casts produced three fish and a missed take, yes really. Mark had now joined me but his presentation had changed so many times during the day that I wanted to check his leader length and fly positions as he wasn’t getting any action. A quick retackle and I notice his rod take on a satisfying bend as a trout leapt clear of the water. Suddenly we couldn’t stop catching, the light was fading but the fish were biting and we had to keep fishing, then suddenly it stopped. 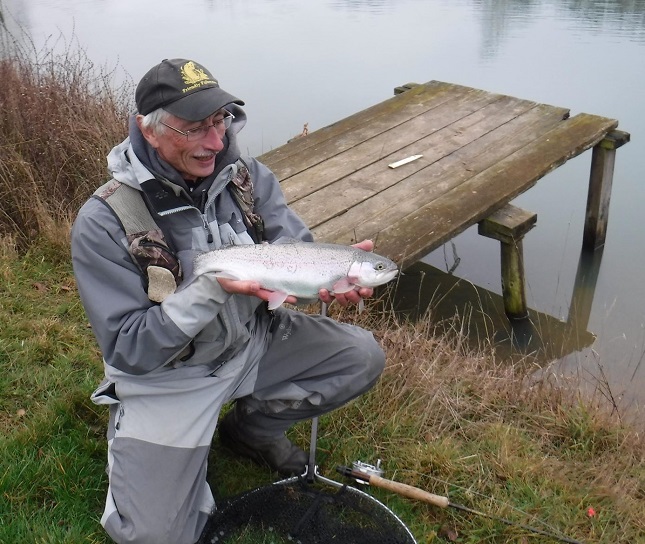 As we retreat to the car park we chatter about what a great fun day we’d had and when should we do it again? Not long methinks.