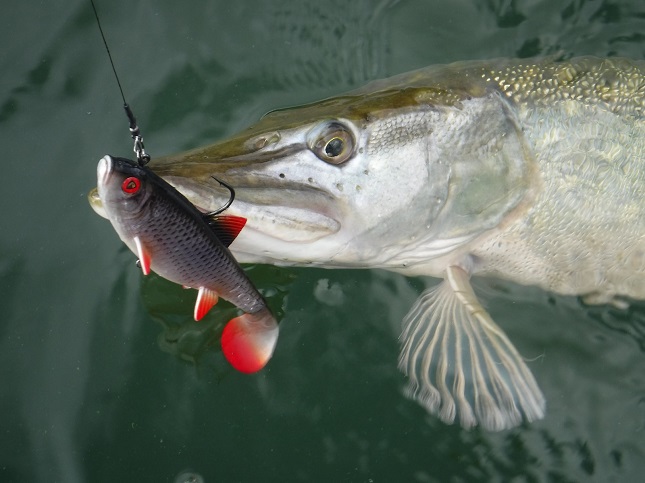 As a result of last years “super summer” we are seeing massive shoals of coarse fish fry on all our reservoirs. On one of our local waters the fry shoals are so dense that my echo sounders signal was unable to penetrate through them to see the bottom!

The vast numbers of these small fish has made it especially difficult to catch Perch or Pike this year. You won’t be surprized to hear that Perch feast on fry but Pike? Experienced Pike anglers will tell you how difficult Pike can be when they’re focused on fry feeding often ignoring larger food items, including my lures.

I mentioned in one of my previous articles how difficult it was to catch decent Perch on Grafham reservoir due to the explosion Perch fry. I’m now hearing this is also the situation on the Farmoor reservoirs in Oxfordshire.

I’ve been spending quite a lot of time on Bewl recently with my good friend Gary Collins fishing for Pike, with limited success. I’m rather confused as to their whereabouts, the Pike used to hang around the basin and the cages but not so much now it seems? You see a few things have changed since I last seriously fished at Bewl for Pike.

1] The fish rearing cages are no longer being used so there’s no food going into the surrounding area which made this such a “hot spot ” in the past. That’s not to say that the structure don’t still attract perch which in turn draws Pike, so it’s always worth spending some time fishing here.
2] A few years ago Bream entered Bewl via the pumping from the river Medway. The in-flow is through “Goose Creek” at the far end of “Bewl Straight” towards the “Rosemary Lane” end. This area now has a heathy population of food fish which could mean the Pike are more likely to be found here?
3] Apparently the Bream have now spread throughout the reservoir and have “hybridised” with the Roach creating an abundance of 1lb “bite sized” fish, this is an exciting prospect for the future. Only problem is I don’t know much about where hybrids like to be, depth of water etc., and where the food fish are the Pike won’t be far behind.
4] With the warmer water temperatures this autumn the fish are very spread throughout the reservoir, and throughout the depths, plus they don’t have to be near the bottom either!
5] As I’ve already said I believe a lot of the Pike are “on the fry” but there is always the potential that some of the larger “specimen” fish are predating on the stocked Rainbow Trout. These stock fish vary in size from 2lb to 3lb, not an easy meal unless you’re a mid-double or bigger. There are always a few 20lb Pike in Bewl plus I believe the occasional beast over 30lbs, but as I’m experiencing it’s a bit of a “needle in a haystack” trying to find them. 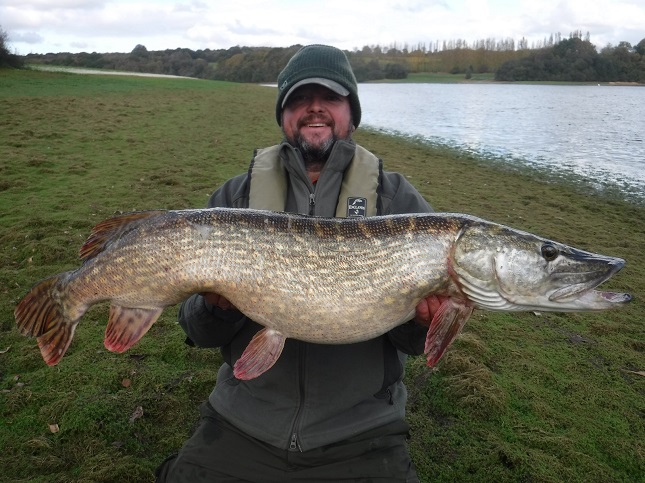 Gary Collin with his “big fish”

We started on Bewl with a two pronged approach, Gary concentrated on fishing his lures “slow and low” just scratching them along the bottom. While I tried a more active approach which saw me making long casts followed by a long, slow continuous retrieve. This was designed to lift my lure several feet off the bottom before pausing to allow it to flutter back to the deck. This retrieve would see my lure searching the bottom 5 or 6 feet of water, in whatever depth we were fishing. We tried a variety of spoons, spinnerbaits and soft plastics, all the Pike were caught on soft plastics. Gary very quickly scored on his Fox Replicant, two or three jacks later and this lure was almost permanently attached to his trace.

We were drifting into a bay, heading towards the bank in 10 foot of water when Gary set the hook in a good Pike, he shouted “big fish, big fish, get the net”, I quickly scooped a super fish of 20lb 8oz caught on, you guessed it a 14cm Fox Replicant lure, not a big bait by any means, but not small either, confusion still rules.

I had a brief interlude from Bewl the other weekend when myself and two of the “Amigos” fished Rutland Water. Not much to report on our account but while we were there Jamie Potts caught an absolute beast of a Pike. Jamie was finesse fishing for Perch using a 9cm shad. The Pike was in superb condition and weighed 36lbs, what’s more Jamie had to “hand land” it, as unbeknown to him his friends, in another boat, had nicked his landing net as a joke, now the joke’s on them, “well played that man”. 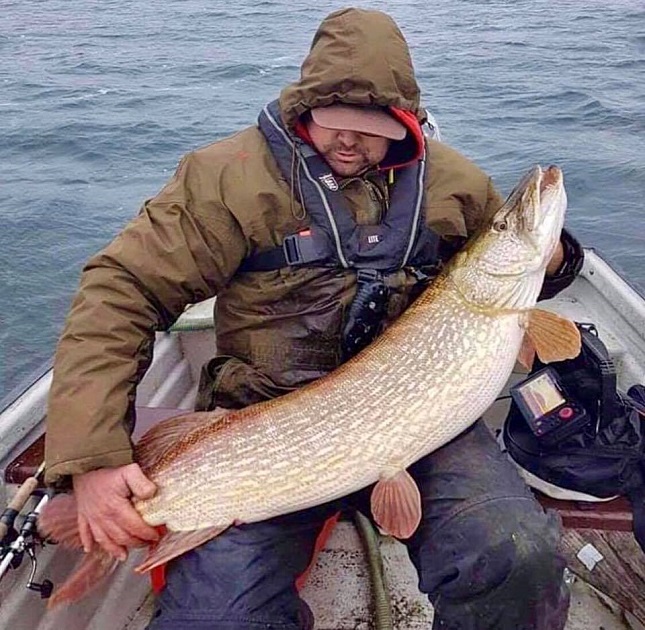 Jamie Potts and his “Rutland beast”

For as many years as I can remember, the one thing that keeps all of my keen fishing friends focused, when the going gets tough is the saying, “it only takes one fish” to change your day, or in Jamie’s case the season!