A new direction, this was going to be a start of a new adventure. Instead of our normal Spanish Barbel fishing we were heading for the Ebro Delta, an area of marshland and rice fields that lies between Tortosa and the Mediterranean.

Our group was made up of the usual suspects, James Gardner, Mark Bryant, Gary Collins and me, the four Amigos. We were going to be based at Riumar right at the mouth of the river; we had an apartment and two self-drive boats at our disposal. One boat was large enough to go offshore while the other smaller more agile boat was perfect for exploring the extensive river system. Our target species were Bluefish, Leerfish, Dorado, Little Tunny and Sea Bass, the river would also offer the chance of Mullet, Black Bass and Catfish. If that wasn’t enough we could always go offshore and search for Bluefin Tuna!

Our first day was going to be very important, what we would learn would influence the rest of our stay. So it was decided that Mark Bryant and Gary Collins should go to sea while James Gardner and I would explore the river. We felt this would utilize our skills best, Mark being a very experienced sea angler while James and I are more at home in freshwater, Gary is the “wild card” in our bunch being quite at home fishing flies or lures in fresh or saltwater.

Day 1, James and I motored several miles upstream against a heavy flow; our plan was to drift downstream while casting towards the bank. Our boat was positioned strategically in deeper water but within easy casting distance of the bank. We had been informed that with so little height difference between high and low water, less than 20cm, that the water didn’t mix in the river as you would expect. In fact there would be freshwater down either bank, almost to the estuary mouth, with the denser saltwater sitting near the bottom in the middle of the river, with freshwater above!

James and I adopted for a two pronged approach, I would cast surface lures hoping to draw strikes from aggressive fish, while James would use crankbaits and soft plastics to search for less active fish. As we drifted James spotted some coloured water being discharged from one of the rice fields. We had been told to look out for areas like this as they attracted small baitfish, which in turn would draw predators. As we neared the outflow James had a hit on his crankbait but the fish came unbuttoned, he was pretty sure the culprit was a small Leerfish. My next cast drew an explosive take that caught me by surprise, striking too quickly saw my lure fly past my ear, a chance missed. After this early bit of excitement our spirits were running quite high but an hour later without any signs of fish saw us begin to flag. A change of tactics was required so we decided to troll for a while, we were here for a week so we needed to pace ourselves; this was a marathon not a sprint.

Having trolled close to the margins almost all the way back to base, without any signs of fish, I suggested maybe we should try trolling down the middle of the river. Within 200 yards my Rapala Max Rap got smacked by one angry Bluefish, which immediately erupted on the surface. I wound down hard making sure to keep my line tight as the fish proceeded to leap clear of the water in a series of jumps. A passing boat stopped to watch the action; you can imagine how relieved I was when James landed it. Not a monster but my first Bluefish ever, I’d like to report this was the start of an action packed afternoon but sadly that was our only success on day 1. Mark and Gary had an altogether more eventful day! They negotiated the shallow sandbar that separates the estuary from the sea and went exploring. Trolling was their first option, searching for fish and features, this method is also very effective at catching active fish. As they made their way offshore Mark’s Rapala X-Rap Magnum got nailed by one very angry Leerfish, which sped off at a rate of knots taking 200 yards of line on its first run. Twice Mark managed to get the fish close to the boat before it charged off again, on the third occasion it changed tactics and swam across the wind. Up until then Mark had managed to play the fish and control the boat, backing up towards the fish to limit the distance it could put between itself and the boat. Now Mark instructed Gary to take over control and slowly go forward and turn the boat to follow the fish, which was now accelerating towards the horizon. The throttle was a little stiff and Gary pushed the lever a little too hard, launching the boat forward at speed. This threw Mark off balance, “he ran past me, faster than Usain Bolt” Gary exclaimed. Mark exited the boat horizontally like superman, “all I heard was him say, NOOOOOOOO”.

As Mark surfaced, his first thought was Propeller? Fortunately the boat was still heading away from him. His second thought was rod? Fortunately he was still clutching it and then he realized the fish was still attached and was dragging him away from the boat! Mark couldn’t swim back to the boat so he had to ask Gary to SLOWLY bring the boat back towards him. Thankfully that was the end of the drama, back in the boat Mark regained his composure and finally landed his prize. EPIC! Fortunately this story had a happy ending; it could so easily have ended differently. The fish weighed 50lbs but its size was immaterial, the story of its capture was retold endlessly having us in fits of laughter for the rest of the week. 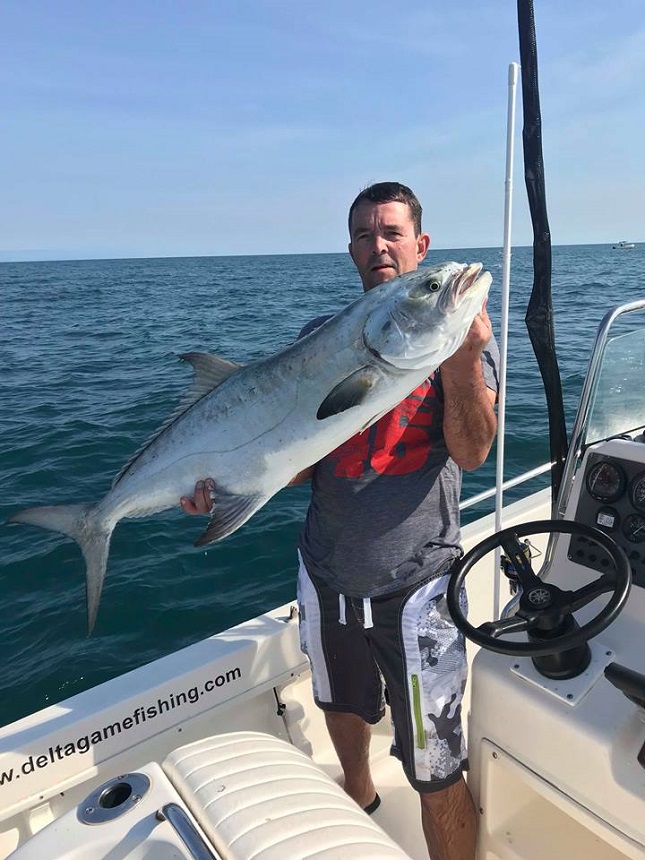 After the chaos, came the calm, they continued trolling around the area, they located a very small wreck, one of the very few features we came across during our stay. Seeing a few small fish around the structure they changed tackle and started vertical jigging. Mark noticed a large fish showing on the echo sounder, high up in the water, so he quickly wound his lure up to it, wham! Apparently the take was so hard Mark said it would have broken 20lb line easily, it was that fierce. Another Leerfish slightly smaller than the first but a superb fish all the same. What an eventful day.

The pattern was now established; each day we would try different areas and tactics in a vain hope of stumbling onto some obliging fish. After only one take in four days of casting and trolling lures James decided to go Mullet fishing. Every day he had observed abundant numbers of Mullet lining both banks, and they were big too. We also saw large Blue Swimming Crabs, this invasive species is quite numerous and aggressive, we saw them hunting small fish and even swimming up off the bottom to take bread from the surface! 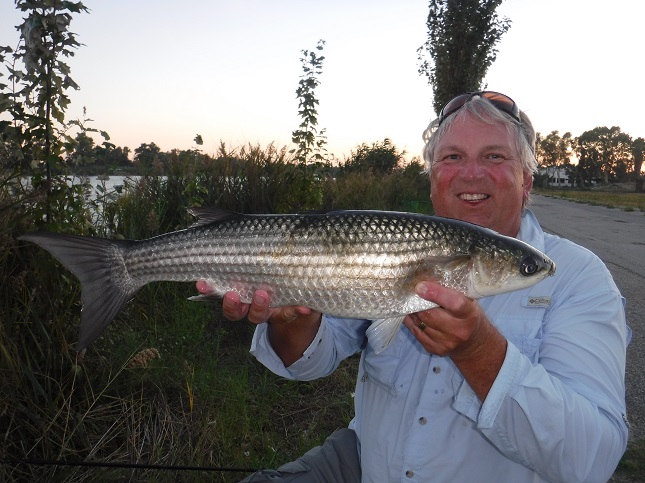 James caught several Mullet trotting float fished bread; he kept a few for livebaits which he used later to good effect. James could only control one rod as the Mullet were so large and powerful, the float fished bait did circuits around the boat until Catfish of 75lb and 40lb engulfed them.

A few more days of blanking saw me accept James offer of teaching me how to catch Mullet. Boy what an amazing day I had, James would feed some mashed bread to attract the attention of the fish before I would make a cast. The shot was bunched directly under the float so the small piece of bread would float on the surface. I had to watch the bread as a Mullet charged towards it, pushing water ahead as it approached! Expecting the bait to be engulfed I was astonished how gently they would then mouth the bread. James explained how important it was not to pinch the bread on too hard; it had to be as soft as possible if they were going to accept it. Only one corner was pinched lightly enough to withstand the cast. Once hooked, I missed far too many by the way, the fish would then bore and twist in the current. I had to be very careful not to tear the small size 14 hook out of their soft lips, very challenging indeed. A dozen Mullet between 4lb and 5lbs was my reward for a fascinating insight into the nuances of Mullet behavior.

A nice Bluefish for Gary Collins

Mark and Gary stuck to their quest mixing it up between casting, trolling and jigging. Gary managed to catch a nice Bluefish and on the last day they also caught a few small Gilt Head Bream jigging out by the ‘light tower’ and finally a bonus Bass of 7lbs while trolling in the river mouth.

I won’t bore you with the rest of our trip, we endured high winds most days, enjoyed superb weather throughout our stay, the company was fantastic as ever, I’ve not laughed so much in ages and the local restaurants were a highlight too. Fishing? We threw everything bar the kitchen sink in an effort to unlock the secrets of the Delta but while we were there unfortunately the fish where elsewhere, that’s the nature of sea fishing in my experience, “it’s either feast or famine”. Will we return? A difficult question to answer, none of us have enough spare time to do this place justice at the moment but I would like to return in the future. The potential is there as James and I can testify, moments before packing up on our last day a large sickle tail, of a big Leerfish, sliced through the water right in front of us, as if to say “adios amigos”.