Powermill and the Mayfly

My last visit to Powdermill [Sedlescombe] was after the recent bank holiday and the heat wave had finally blunted the Trout's appetite. Well that's what my boat partner James Gardner and I concluded because for the first few hours despite having lots of enquiries, had not produced a fish!

The day started off with ideal "dry fly" conditions, overcast sky with a mild, gentle breeze and light ripple, perfect. We were using our normal successful Golden Olive Wulff and Grey Wulff Mayflies, tied on size 10 long shank hooks. The fish would happily rise to our flies but they stopped just short, boiling under the surface, before veering off and returning to the bottom. We were not alone, when we asked other anglers how they were doing, they all told us the same, they too were being frustrated, "we just can't get them to take properly" was their reply. 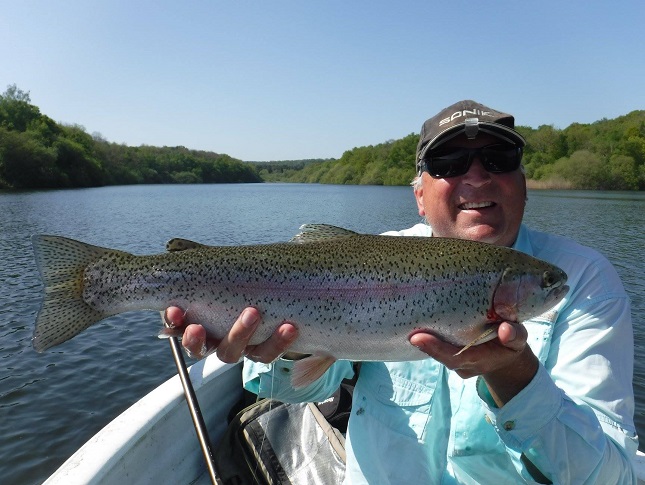 By mid-day we had managed to catch a couple of fish each but we were still puzzled, what could we do to change things. I suggested we investigate the natural bank, up-wind of the bubble line, as I'd noticed Black Headed Gulls patrolling this area all morning; they had to be finding food! It was flat calm so we weren't going to drift and the lack of ripple made our leaders stand out on the surface, not ideal, but instantly we both had offers, but again no hook ups. "Close but no cigar".

I next positioned our boat to drift down-wind of the bubble line, there was a small wind lane here coming off the tail end, the wind was pushing the slick towards the bush fringed shoreline. First drift and we both hook fish, we'd found a small pod of feeding fish sitting tight to the bushes. This slick held food and a few hungry Trout that interestingly would only accept a smaller size 10 short shank Grey Wulff dry fly. No matter where I placed this fly on my leader it was the only one they would accept!

Last knockings, when the wind had died, we were surrounded by eager Trout as they mopped up the "spent Mayflies" [dying flies after egg laying] these fish were very unpredictable in their movements, with no wind to "line them up". We resigned ourselves to just being spectators, so that's how we ended our mayfly season for another year.

Kingsmere Reef, Black Bream & the sage of the "sore finger"

"Fishing for the pot", now I must confess I'm not a great fan of eating fish, especially if I have to clean it, and cook it myself! However there is one exception, Black Bream, these feisty little fish taste so good that I jumped at the chance to catch some when my good friend Mark Bryant, one of the 4 Amigo's, invited me to join him in his boat.

The Kingsmere reef off Littlehampton was our destination; the Bream migrate here each spring to spawn. Mark asked me how I wanted to fish, bait or lure? Mark knows I almost always fish with artificials. He told me the bait was the more productive method, so I compromised for once and fished with bait. Small hooks baited with tiny pieces of squid were lowered to the bottom as we drifted systematically over the reef. Bites were scarce but gradually we caught a few Bream by lifting and lowering our rigs a few inches off bottom. This tactic caught all of our fish, with the odd one going 1 1/2lb. As the tide slackened and the bites dried up I got the urge to play, so on went an Ice Jig. I chose this lure because it would have a wide swinging action that I thought might catch the attention of these inquisitive little fish. I also added a small piece of squid to the rear hook as a final inducement.

First drop down and I'm getting knocks then everything goes solid, and "I've snagged the reef"! For my second attempt I removed the belly treble, should have done that first time, and send it down to play. Almost instantly I'm getting bites after a gentle flick to send the jig swimming. I hook up but it's not a Bream it's a flobber AKA a Pouting. What's more as I go to un-hook it, it flips sending the ultra-sharp single hook past the barb, into my finger! After a lot of grimacing Mark managed to yank the hook out by looping some hefty line around the bend and pulling the hook out backwards, ouch!

One week later I'm back in Mark's boat, this time we're going off-shore, wreck fishing for Pollack. My finger is still tender so I'm very cautious around lures with trebles. I decided to fish a Fiiish Crazy Sandeels via a flying collar, I selected 220mm Rhubarb & Custard coloured sandeel and the Pollack seemed to approve, once Mark had found a wreck with a few fish on it. The dreaded May water was still evident even 30 miles out! We had to fish several wrecks before we started to catch anything; even then we could only nicked a few fish from each wreck before the action dried up. That was the pattern for the day as we hit spot after spot on our way back toward shore. By the time we reached Newhaven, we had clocked up over 100 miles! 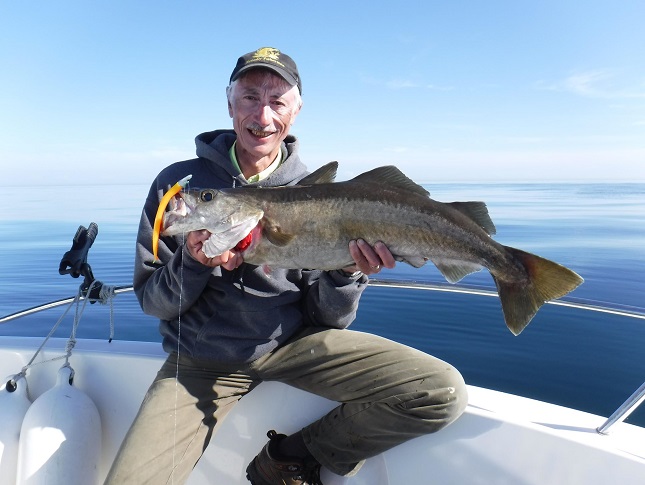 I've had to lay off fly fishing for Trout over the last few weeks as I'm suffering for Tendonitis, "golfers elbow", although I've never played golf! So I took the opportunity to take Jacob Harman fly fishing for Carp, Jacob was doing the fishing while I was feeding the fish, giving advice and offering encouragement, when needed, while we waited for the fish to respond.

I have to say, it's painful watching someone else fishing, even more than doing it yourself with Tendonitis. It's not that Jacob was doing anything wrong, in fact he was doing OK, it's just I wanted to join in the fun myself but I was resting my arm, "on doctor's orders"! After a few refusals to the Dog Biscuit fly, I suggested we change to a smaller pattern, on went a Hopper Popper that has caught me several Carp in the past but this wasn't the answer today. Next up I tie on a Bob's Beetle, a fly that has caught me hundreds of Spanish Barbel. After a few missed chances Jacob finally gets rewarded for his patience and for putting up with me in his ear all evening.

This style of fishing is so visual and exciting I think Jacob is now hooked and looking forward to another trip, soon!

Andy's shop The Friendly Fisherman in Tunbridge Wells [TN1 2PS] stocks a huge variety of freshwater tackle, especially for Carp. Plus a vast selection of the lure fishing and fly fishing gear.