Each month in my introduction I seem to complain about the vagaries of the weather, never more so than this month. After the “beast from the east” I was looking forward to spring. Spring is my favourite season of the year it’s when colour returns to the countryside and we see migrations of birds returning from their winter quarters. The extreme changes in weather and temperature has played havoc with the perch and pike’s spawning, one minute it’s winter then suddenly it’s summer for a day or three before suddenly returning to winter again! As I write this we’ve experienced two such “heat waves” which has even seen carp preparing themselves to spawn.

Back to the fly

This month saw James Gardner and I return to our other passion, fly fishing. As I’ve said before the Stillwater’s I fish are stocked with triploid Rainbows and diploid Brown Trout, these sexless fish do not go through the rigors of spawning so spring is when they eat, buzzers in huge quantities.

Buzzers and their larvae bloodworms are the staple diet of all freshwater fish and this spring has seen exceptional hatches on many of the country’s large reservoirs, especially Oxford’s Farmoor 1 and 2. James and I have become frequent visitors to these waters, the abundant fly life coupled with the fighting quality of their fish make it one of our favourite destinations.

Our first visit this season to F1 saw us anchor up and fish towards the downwind bank. We positioned the boat 50yds off the bank which allowed us to focus our casts at the wall, we quickly ditched our floating and sink tip lines in favour of intermediates and Di3’s, this allowed us to get closer to the bottom without our flies riding up in the water as the boat swung from side-to-side on the anchor. We plundered fish off the marginal drop off, where the concrete wall meets the natural bottom; it was here that the buzzers were ascending vertically towards the surface. The water was very cold and so were the fish which meant that the bulk of the Rainbows were feeding on the buzzers in the bottom 5ft of water. One thing I’ve learnt from lure fishing is the importance of marking my line, these “distance markers” have helped me catch more fish and so it was on this occasion. A typical cast would see me count down my “fast glass” intermediate line for 20 seconds before commencing my very slow figure 8 retrieve, with an occasional pause, which saw my flies fall down the marginal slope. As soon as I saw my 30ft marker I was expecting a take, as my flies began their upward path back to the boat. If I got a take anytime between my 30ft to 20ft marks the fish had taken my top dropper fly, a Diawl Bach, if the take came between my 20ft to 10ft marks the fish would be on my middle dropper, a Cruncher. I could only imagine that the takes were coming as each fly left the bottom, perfectly replicating the buzzer pupae’s.

On one occasion James and I had a “purple patch” when we both caught several fish on consecutive casts, I was about to break the sequence as I now had my 10ft marker in the tip ring, I paused willing a take, nothing, a quick figure 8 retrieve and my rod loaded up taking on a pleasing fighting curve and held firm. With no head shaking or violent runs I decided to wind all the loose line onto my reel as this was obviously a better fish! James immediately said “that’s either a big Brown Trout or a Pike”. The fight was un-spectacular but gradually as we peered into the depths of the tap water clear water the unmistakable shape of a rather large pike appeared. My poor old #5 rod groaned under the strain as I eased it towards the waiting net. James scooped it up, tail first, before it knew what had happened. 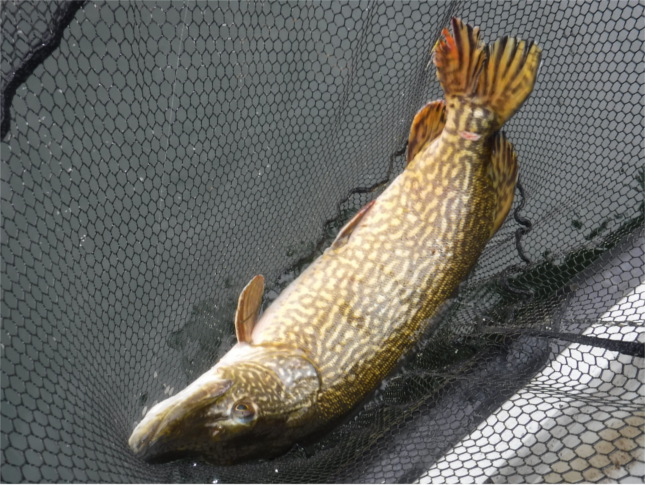 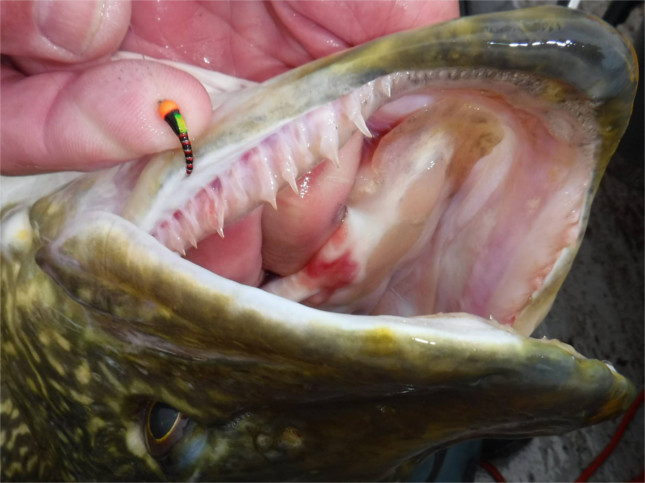 Just nicked on a Beaded Buzzer

Neatly sitting just between its teeth and its jawline sat my bead headed buzzer! We were unable to weigh the most beautiful pike I think I’ve ever caught, as I only had scales that weighed up to 15lbs. It didn’t matter really; we both agreed it was very close to 20lbs, maybe just short by a few ounces? After a short break to take stock of what had just happened we decided to move further along the bank, re-anchor, re-focus and start all over again. And so we continued catching more stunning Farmoor Trout. 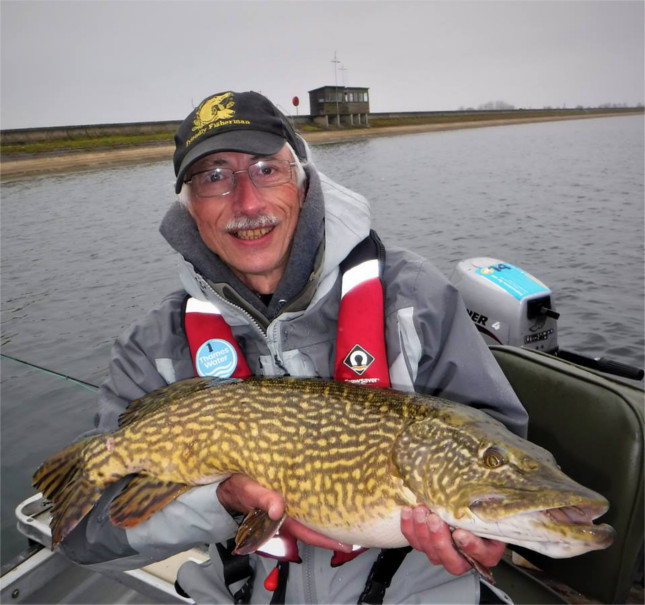 A spur of the moment decision saw me rock up at Jane and Lee Green’s Spring Hill trout fishery [TN2 4BB] near Tunbridge Wells one Sunday morning. I’m blessed with so many places to “cast a fly” within 25 miles of my shop in Tunbridge Wells! I have to admit I’ve not been to Spring Hill in ages, not for any other reason than my preference for boat fishing on large reservoirs. That said when I do go to Spring Hill it’s always a joy to see such a well maintained water. This morning was cold and damp with the forecast for heavier rain in the afternoon so I wasn’t aiming to stay too long.

Well it had to be a floating line and “hot head” Damsel, I started on one of the downwind platforms. The ripple was pushing into the corner of the lake I was fishing, I hoped that any hatching flies would drift towards me and there should be plenty of obliging Trout stationed here? The first few casts saw me trickle retrieve my Damsel nymph back towards the bank before slowly lifting off, not before the obligatory “hang”, just in cast a following fish could be tempted. I quickly noticed the occasional swirl and flat spot in the ripple that indicated fish activity just sub-surface. My original fly choice was not going to “cut the mustard” being weighted it was going way too deep. I selected a hackled French Partridge Mayfly which was lightly “Ginked” to hold it on the surface for a few moments before the drag of my fluorocarbon leader drew it under the surface. Within a couple of casts I’d had an offer to this fly while it was on the surface, but it shied away. That was all the encouragement I needed to change my leader set up and fly.

Off came my fluorocarbon leader which sinks, to be replaced with co-poly nylon which floats, I attached a micro leader ring to the end and a 2ft length of fluorocarbon as my “tippet”. My fly choice was easy it had to be smaller to imitate either emerging midges or Hawthorne, just in case there were any about? On went a size 10 black CDC Hopper and I was quickly rewarded,  first cast with a positive take, after a short battle on my trusty #5 the fish was safely netted, dispatched and spooned. Unfortunately the spoon revealed nothing but every time the ripple re-appeared more fish would show in front of me and I picked off several more before my brief visit was over. Home in time for lunch, job done! 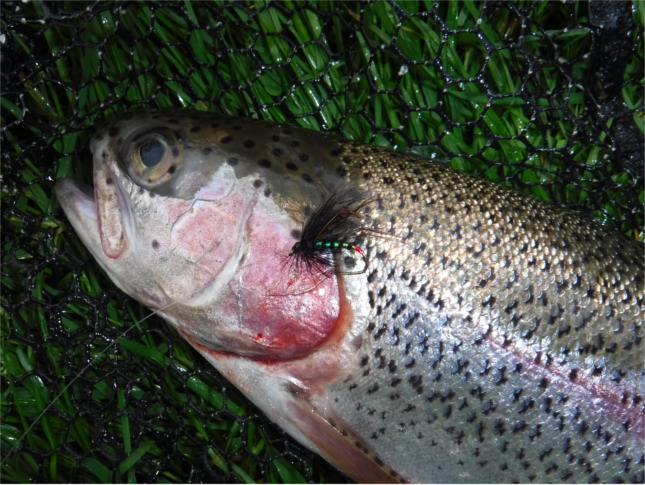 This Rainbow fell to the charms of a Black C.D.C. Hopper

As I mentioned there are plenty of waters a short distance from Tunbridge Wells to suit all tastes, here are a few off the top of my head that are available on a day ticket.