This year’s three day trip was going to be a little out of the ordinary as James Garner, Rik Wesley, Andy Blazey and I were going to be joined by Gary Collins, Mark Bryant and Shimano’s Matt Boast, the Brits were coming!

Our trip was timed to take place just before Predator season ends. The area we fish is a large expanse of water described by the local anglers as a lake but it’s in fact a river that has locks connecting it to the sea. There are several rivers joining Hollands Diep and a large proportion of their fish populations migrate into the lake for the winter and stay to spawn before returning to their home rivers as the warmer weather returns.

With such an influx of food fish the water holds a large population of predators in the form of Perch, Pike and Zander plus Asp, Ide and the occasional Catfish. It’s the reason my friends and I head here as often as we can because there’s always somewhere fresh to fish, weather permitting, did I mention it’s very flat in Holland so when the wind blows shelter is at a premium.

Being the original members of our group fishing in Holland, James Gardner and I had invited our close friends Rik Wesley and Andy Blazey to share in the fun and they have now become regular visitors with us each year ever since.  We swap boat partners during these trips so we each get the chance to bond, learn new skills and raid each other’s lure boxes. As ever we are grateful to be guided by Shimano’s Willem Stolk and this year Arand van der Heijden. Their advice and knowledge of the water is invaluable, without their help we wouldn’t catch so many super fish nor enjoy our trips as much as we do.

Matt Boast, another good friend of ours has been fishing in Holland a lot more than James and I since he purchased Willem’s old boat “woody”. Matt had generously donated a Dutch fishing trip to a Cancer charity in memory of the legendary Jan Porter.  Gary Collins bid was successful; so Gary, along with another of the “four amigo’s” Mark Bryant, were joining our growing band of merry men. To add to the excitement this was Gary’s first fishing visit to Holland.

Each day three boats would head in different directions as their captains headed to their secret spots. The first two days the weather, wind, decided where it was possible to fish with any sort of control. Willem hunkered down in an area sheltered by a small wooded copse, although they had a slow morning James and Rik had a magic couple of hours mid-afternoon as a shoal of enormous Perch readily accepted their soft plastic lures. They both caught fish over 4lb topped by a whopper of 5lb 6oz caught by James, who else? 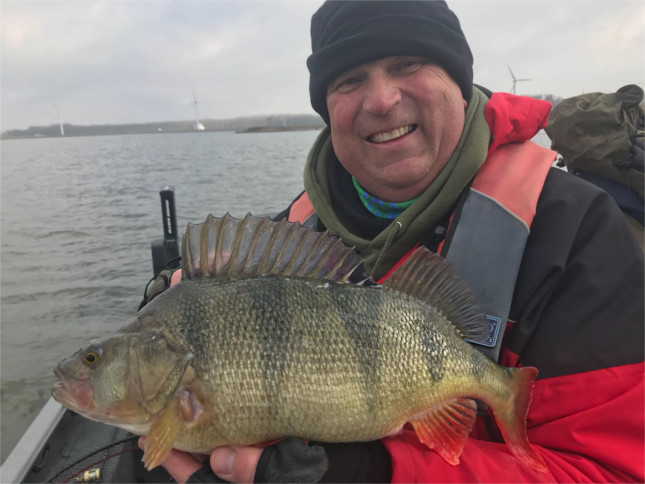 Andy ‘B’ and I fared less well, a late start saw us eager to catch up for lost time, but try as we might we couldn’t get a bite. Arand took us to several of his “GPS marks” but the fish seemed to have lockjaw. Looking at Arand’s chart I suggested we try some humps I’d fished with Willem in the past, “it’s an area we’ve caught good Perch from” I told him; luckily I was proved right when a 3lb 14oz engulfed my shad.  Andy ‘B’ and Arend both added a Jack Pike to our tally before the action stopped as quickly as it started. A decision was made, as time was running short, to go Zander fishing for some quick bites and rod bending action, we could chase Perch tomorrow when we would be less tired and more settled.

Matt, Gary and Mark had a very tough day, not having the experience of the local guides Matt hadn’t as yet acquired the knowledge, as yet, of where to fish in these extreme windy conditions.

Refreshed and full of enthusiasm after James and Rik’s success the previous day, we headed out for another battering as the wind showed no signs of abating. Willem took Andy ‘B’ and I to yesterday’s hot spot, while Arand took James and Rik up river to a number of sheltered harbours.

Andy ‘B’ picked off large Perch, up to 4lb 4oz, while Willem and I struggled to get a take. Whatever Andy was doing the Perch liked it, but I couldn’t replicate it, has hard as I tried. By 3.30 in the afternoon I was still trying to get my first take! 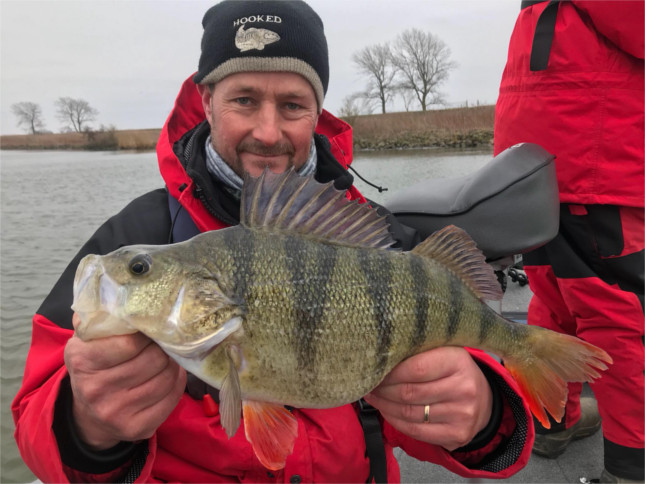 Andy Blazey with another beast

I spotted a Westin Shadteez, minus its tail, lying on the floor of the boat, I attached a willow leaf blade to the shad where the tail should have been and cast it out behind the boat. As we drifted down the drop off into deep water I actually got a take, and from the head shaking I knew it was a good Perch. At 4lb 5oz it was the largest of the day but what pleased me most was the modified bait had been its downfall. Last gasp and another take, this time it’s a Pike, so I finish the day having avoided a blank!

James and Rik had a blinding day with a hatful of huge Perch, several over 4lbs, topped with a 5lber apiece, with Rik’s being a well-deserved new PB of 5lb 3oz. 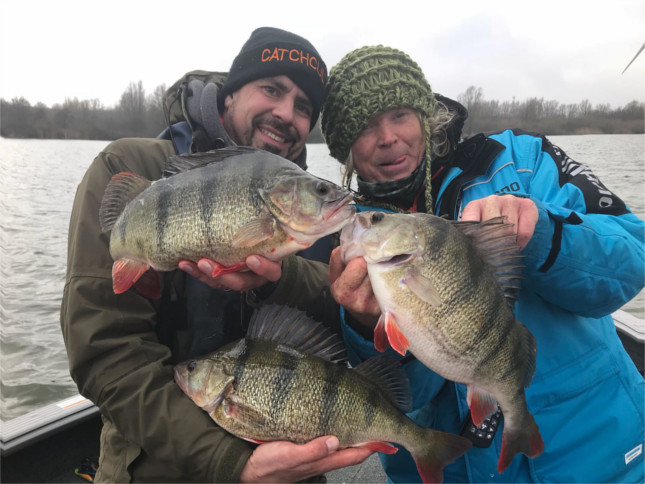 Matt, Gary and Mark had another difficult day as they searched for shelter and fish. Gary was on fire though with two new PB Perch over 4lb so he was incredibly happy.

Finally the wind had dropped; in fact the forecast was for hardly any wind at all with even a little sunshine! We were all excited by the prospect of hitting new spots that hadn’t been fished for several days. James and I were fishing together at last, Willem took us to the “dumping grounds” a well-known shallow area surrounded by deep water. Willem wanted to focus on one small hump in particular in this mid-river section so dropped an ‘H’ block marker on the spot, now all we had to do was make accurate casts around the feature. I was first into action when my Fox Spikey Shad was taken by a small Zander. What a relief after scratching for the previous two days, then James and final Willem all added to our tally. As we slowly drifted past the marker we picked off fish, mainly Zander but with the occasional Perch. My new favourite bait the tail-spinner shad was the downfall of a few Zander, our takes slowed as the morning drifted into afternoon, time to move on. Our day petered out and finally we ended up in Willem’s perch “hot spot” of the previous two days where I nicked a small Pike on a chunky spoon.

Arand took Andy ‘B’ and Rik up river firstly to the harbours before hitting some shallow mid-river spots. There were lots of boats on the water today, most were jigging in the deep water targeting Zander which a far easier to catch according to our guides, who prefer casting for perch, in fact it’s only the crazy English, Finnish and Russians that bother casting! We spend our time chasing Perch in Holland because they are so many big fish there it makes the mind boggle.

Matt really worked his magic on the last day, taking Mark and Gary down river to Haringvliet. This area had been unfishable on the previous two days, the guys fished down the slope into deep water. Gary upped his PB again with five perch, the smallest being 3lb 15oz and the largest 4lb 15oz, what a result! Mark also caught a new PB at 4lb 7oz, well done mate, Matt also joined in the action with a few jumbo perch too. 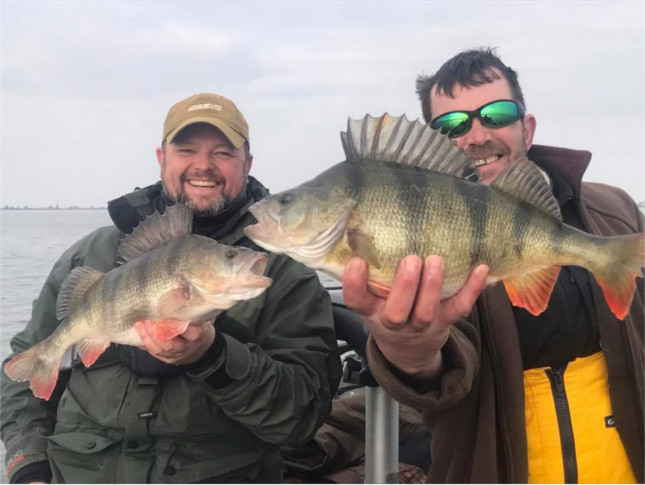 Another trip is over in a flash, where did those three days go? I suppose we’ll have to do it all over again next year?