I’d like to share two quite different days I spent last April on Farmoor 1 reservoir in Oxford with my good friend James Gardner.

Wow, James Gardner and I had just enjoyed a superb day on Farmoor 1 in mid-April.  The fish were well spread out across the entire reservoir, moving up and down through the surface layers.  We were advised by the duty ranger, Chris, that better quality fish could be found a little deeper, feeding on fry.

So armed with this information we quickly assembled our outfits, mine consisted of a Lee Wulff Predator Line, a floating line with a 12’ Intermediate sinking tip, with a mixed team of flies consisting of a Biscuit FAB Blob on the point, mini fry on the middle dropper and Black Marabou Diawl Bach on the top dropper.  James elected to fish a full floating line, with a team of slim Diawl Bachs and Buzzers on the droppers with a weighted point fly to stagger his team through the water column.

To say we were excited was an understatement as we saw several fish slowly cruising through the surface with their dorsal fins slicing through the film. With very little ripple and overcast skies it occurred to us that maybe dries could be a better option but as the cool breeze picked up those thoughts quickly got put on the back burner. Our first drifts were into the bank, close to the tower, just as we approached the margins my line stabbed down in response to a vicious take from a very angry Rainbow that fought as all Farmoor fish seem to, with lots of power and attitude. I wonder if it’s the “ultra-clear” water that makes Farmoor Rainbows make such determined runs, at first across the surface, before fighting doggedly down and dirty below the rod tip and the boat? 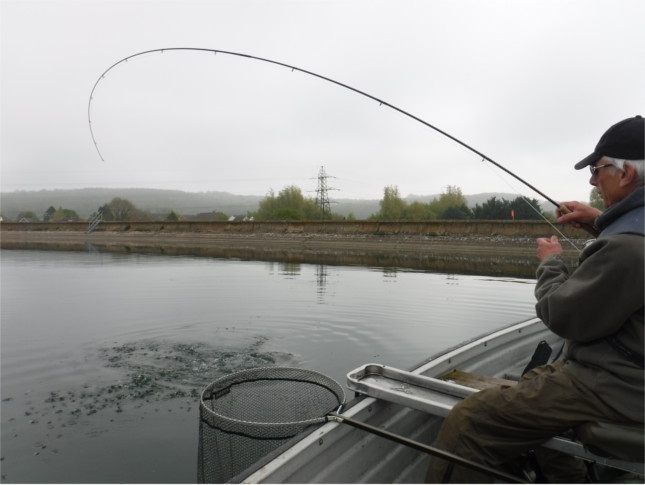 Andy tries to coax this Rainbow to the net 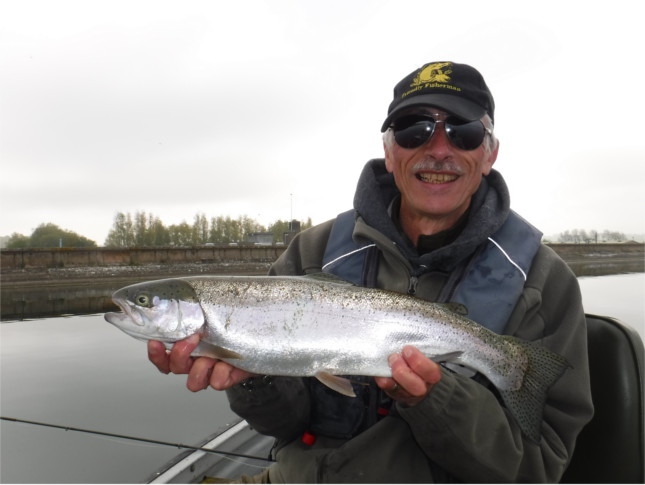 The end result of another epic battle 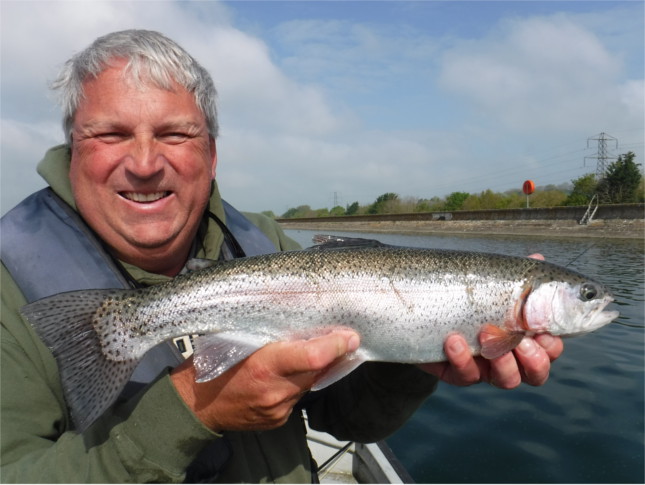 Once in the net I quickly removed my fry imitation, thanks Chris, and returned it to fight another day, Farmoor 1 is “Catch & Release only”, by the way. Another fish fell to the fry pattern but everything else took the top dropper, which is both good and bad? Why? Well you see fish caught on the top dropper have a nasty habit of tangling the trailing flies around the leader, especially if they fight as hard as Farmoor fish do. So was my success due to the fly’s depth or its appearance? I was fairly sure depth was more than likely the answer but wasn’t brave enough to re-position my Diawl Bach to the middle dropper position, so instead I tinkered with my other two flies in an effort to catch on these too.

Of course the fact that the breeze kept coming and going, changing direction into the bargain as well as the cloud cover burning off around mid-day, all contributed to the fish sometimes breaking surface only to completely disappear from sight again. James was quick to point out that although we were seeing numbers of fish shallow they were in fact only a very small percentage of the population, which meant the vast majority were deeper.

With this in mind I explored different depths by counting my line down before “twiddling”; retrieving my flies steadily with occasional bursts of speed before coming to an abrupt halt. This tactic was the downfall of countless fish, it worked so well at times that even James had to change lines to join in the “rod wrenching” action and boy was it FUN. Late in the afternoon we found fish breeching the surface out in the middle of nowhere, it was fish soup for a while, casting at fish franticly saw both of us hooking up simultaneously. All too soon the wind picked up again and they were gone, “just like that” as Tommy Cooper would say.

Even though the weather forecast predicted strong winds that meant the boats were cancelled we just couldn’t bear the thought of not giving Farmoor 1 another go, even if it meant fishing from the bank. So there we were sitting on the dam wall casting our offerings 25-30 yards out from the bank, but would we catch fish? It took all of 5 minutes to answer that question when I hooked and lost the first fish, then James hooked and successfully landed another one, so yes we could catch and more were to follow throughout the morning. 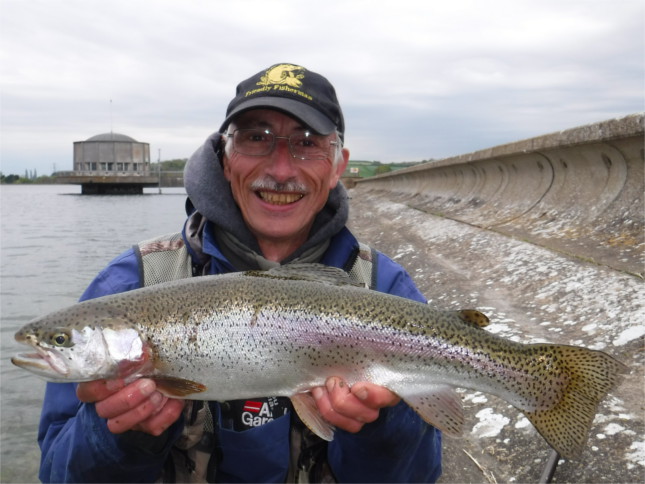 I was again fishing the Predator line, its sinking tip dug in enough to stop the cross wind dragging my flies around too fast or too shallow. This gave me enough control to trickle retrieve my team of flies into the margin where I could clearly see weed and the occasional fish. Interestingly most of my takes came on the first half on my retrieve while James caught a large percentage of his fish close in, very strange? We were by now using similar tactics, washing line system retrieved in the top 2-4 feet.

Around mid-day, while I stopped for lunch, James decided to try an indicator with three buzzers on, using this meant he didn’t have to cast as often, which was sensible as the wind freshened still further. This new tactic seemed just as effective as he continued to catch fish after fish which were obviously feeding on something, there were plenty of flies to been seen on and off the water.  The only disadvantage of fishing catch and release is you don’t get to see what the fish are eating. You can use a stomach pump but I’m not sure how effective they are and more importantly whether the fish recover after what must be a traumatic procedure. 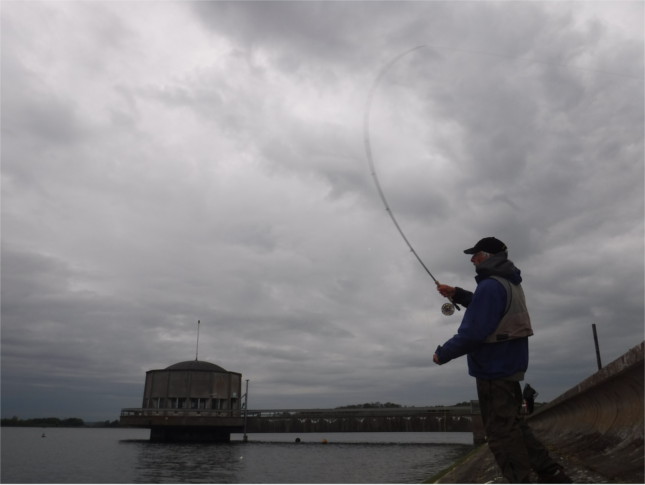 I tried to copy James success with the indicator and although I did catch a couple of fish I never really got to grips with it. Plan ‘C’ I changed to a Midge Tip, 5ft intermediate sink tip, wow I was back in the game big time the fish were pouncing on my flies. My relatively lean patch was forgotten as I matched James fish for fish, it was amazing fishing this good has to be experienced to be believed.

We will be back.