I was itching to get back to Rutland and continue my search for deep water pike unfortunately the weather had other ideas. I didn’t make it back for over three weeks due to a succession of winter storms over the Christmas and New Year holidays. This meant the Pikes location was unlikely to be the same as before after my enforced layoff. I had to start all over again, the water level had risen by some five feet, the inlet pipe was working again after month’s out of service. The restored flow also coincided with bitterly cold weather, the result was the piped water was very cold and saw the reservoir’s temperature drop a further 1.5 degrees to 3 degrees.

Obviously I had to start in the deep areas I’d visited on my previous trips, I’d managed to convince Shimano’s predator ace Matt Boast to join me for this adventure. We targeted depths ranging from 60-80ft drifting through areas I knew held shoals of baitfish at this time of year, my selection of suitable weighted lures had increased somewhat since my last visits, I’d had plenty of time to prepare while waiting for the weather to settle. Matt and I proceeded to search each area using slightly different approaches in an effort to find a winning combination of depth, speed and lure pattern. Our efforts were slightly hampered by the lack of wind can you believe? Our drifts were painfully slow, we were not covering much water, now this is a good thing when you know where the fish are but when you don’t it’s frustrating.

Our lack of drift speed was also effecting our presentations, you see I had weighted my lures to control their depth as the drifting boat drew them through the water. The resulting line drag would lift my lure off the bottom and would hold it horizontally as it slowly fell through the water back to the bottom. This slow undulating retrieve allowed me to search the bottom 10ft layer of water. Fortunately by early afternoon the wind picked up a tad which saw us move from the basin up into the North arm where I hoped the better water visibility would aid our cause. I’d avoided the South arm due to the inlet being situated there, with cold and coloured water running down its length I imagined it to be a poor choice for Pike. However if we’d been fishing for Zander it would have been a good choice as it offered both flow and coloured water, Zander love current and their eye sight is far better suited to hunting effectively in coloured water.

Finally after 5 hours I get a gentle tap as my lure drops to the bottom, a typical Zander bite I think but as I pick up the retrieve again I get a solid hit, “fish on” but as the rod takes on its fighting curve I start to wonder what I’ve hooked? If it’s a Zander it’s a big un’ but I’m not convinced and as it surfaces a low double figure Pike comes into view. It’s a very welcome sight, it’s been a hard slog again today but we’re happy, encouraged we renew our efforts; we’ve at least got a depth [67ft] and an area to work on. Despite this we were unable to attract any more interest from the Pike before the day comes to an end. 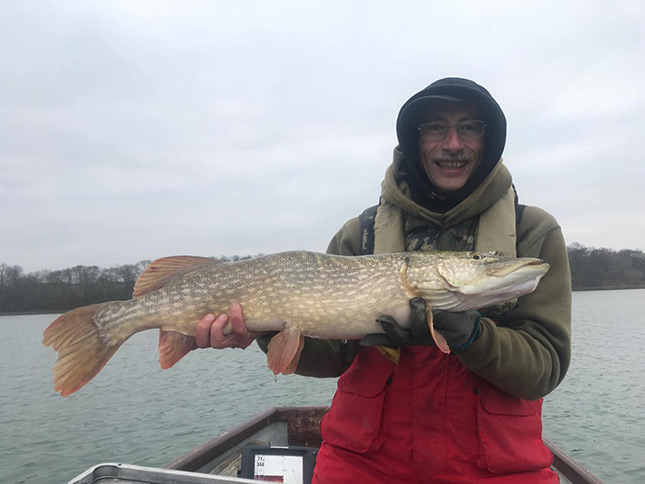 On our return to base we hear the Zander action has been “hot” with one boat catching 30 fish, with several weighing over 5lbs! We also hear of another boat catching a Pike and loosing another around the inlet, so my decision to avoid this area was unwise, what do I know! I can only imagine the flow had drawn a lot of food fish, hence the spectacular Zander fishing and in turn drawn the Pike, maybe?

Unsurprisingly I couldn’t wait to get back to Rutland after the previous trip. I felt that what I’d learnt the previous week would give me an edge, I felt sure the Pike had moved away from the main basin and into the arms. I’d got two days to find out if I was right or not? On my arrival I saw Andy Black, a very experienced Pike angler, Andy informed me that he felt the Pike had moved from the deep water and were now slightly shallower and likely to be found in either arm. So with this information confirming my own thoughts I left the boat harbour full of confidence.

I was fishing with Bogdan Pascaru from the Angling Trust, Bogdan is a very keen and experienced lure angler, and he must be keen as he accepted my last minute invitation without any hesitation. If you knew the weather forecast for the day, wet, wet, wet, you’d know why I’d had such a problem getting one of my usual boat partners to join me!

My plan was to fish the North arm initially working around the feature I’d caught my Pike from last time out. I was also keen to fish the inlet in the South arm after what I’d learnt last week. The North arm produced nothing and with such short days at this time of year I didn’t want to waste too much time there as there was plenty of water to search in the South arm. The fleet of Zander boats which had been congregating around the inlet had dispersed by the time we put in our appearance. I was still using a large curly tailed shad similar to those I’d caught on, on previous trips, Bogdan was switching between Pike lures and Zander baits in an effort to attract a take. We made several drifts over the boils that surface above the inlet pipe, after yet another drift I get a gentle take which I connect with instantly, “fish on”, it’s not a big fish but what is it? Up pops a plump Zander, I’m surprised it’s taken my 20cm bait but although it’s not what I was after I’m very pleased to get any fish. A short while later a strange thing happens, as my Savage Real Eel surfaces I notice a Brook Lamprey tangled on the belly treble hook? I can only imagine it’s been pumped in through the inlet pipe from the local rive Nene? 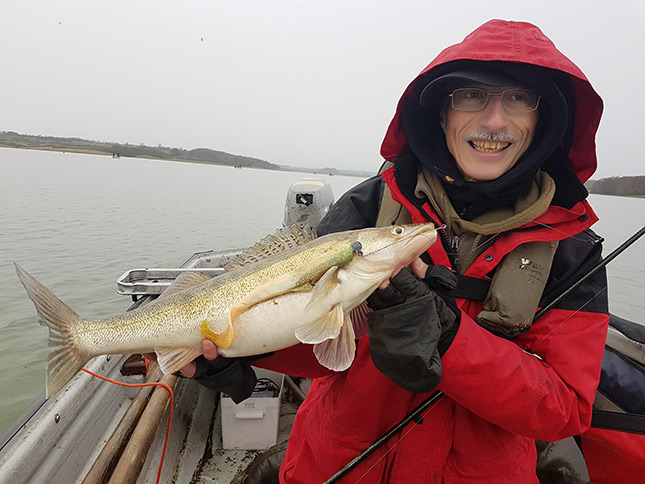 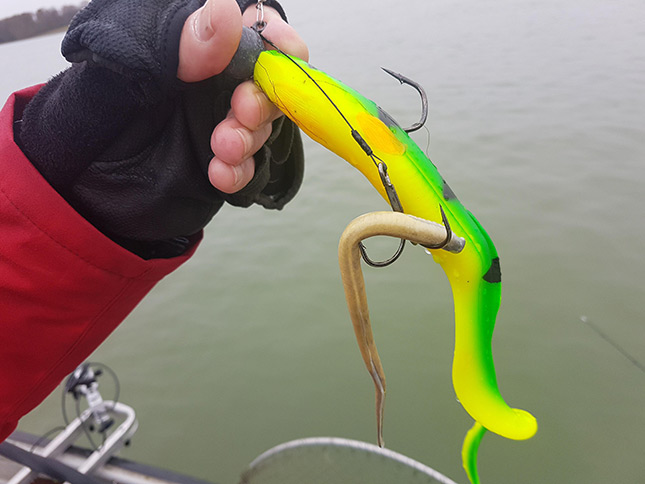 The weather as forecast was nasty and wet and as the day eventually petered out we did one long last drift across the South arm which took us through a huge range of depths from 30 - 70ft in an effort to eliminate the possibility that the Pike had gone much shallower. With minutes to go, as we approached the shore in 40ft, I had a thumping take that unfortunately came unbuttoned half way up from the bottom, bugger!

Back at the harbour the few stragglers who had stuck it out to the end reported a very slow day too so not much could be gleaned from the events of the day. I needed now to get to my digs and dry my kit out before tomorrow!

In the bleak mid-winter 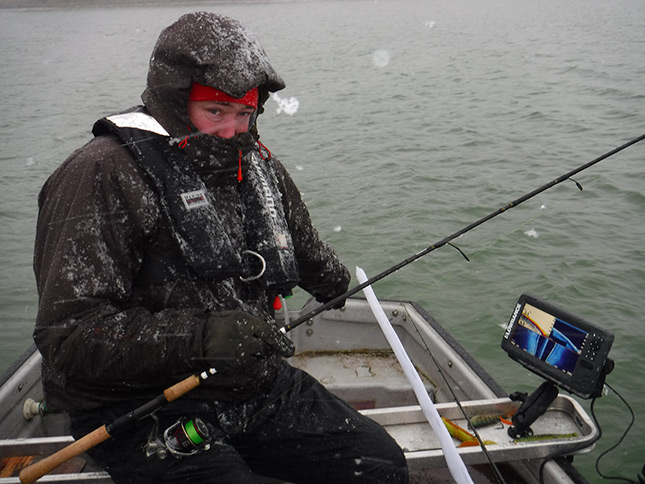 It was bitterly cold when I arrived at the reservoir and it didn’t get any warmer as the day progressed either. Matt Boast had joined me again, a glutton for punishment, surprisingly we were the only boat venture out, yesterday all the boats were out, I imagine the forecast of snow had put them off?

We motored into the South arm to hit the inlet and the surrounding area before venturing further up the North arm. The one thing I’d taken from yesterday was the knowledge that Andy Black had caught a “very special” Pike, in shallower water than we’d fished I imagine, I don’t know at the time of writing any details of its capture but a new PB for Andy means it was over 30lbs.

We fished thoroughly around the inlet and then in some shallower areas that often hold baitfish along the south shore but despite our best efforts we couldn’t buy a bite. So off to the North arm this time we motored further up beyond my usual haunts around Armley Woods. The wind had freshened from the South somewhat so we deployed the drogue to slow us down. The combination of wind chill and snow saw the temperature plummet and as we soldiered on it became increasingly difficult to continue casting into the wind and still feel our fingers. We were both wearing waterproof gloves but after hours of fishing we were struggling to fish efficiently. Our drifts were starting in 40ft and ending in 20ft, our plan was to search for any pike that were making their way into the shallower margins. After a couple of painful hours we had to pull the pin and move, I suggested we head back to an area that provided some shelter as we were now both thoroughly wet and cold. We now drifted an area between the harbour and Normanton church, there had been huge shoals of fry here before the pumping had recommenced, I wondered if they had re-grouped now the coloured water was starting to settle? Several unproductive drifts suggested not! Time was running out and I can’t say I was unhappy at the prospect of getting into my car with the heater running. Matt suggested we spend the last half hour drifting onto the windward shore opposite. In fact we completed several short drifts as we drifted up the slope from deep water into 30ft. With 15 minutes to go Matt gets a slack line take which indicates the fish has hit his lure from below and was still swimming upwards! “Fish on” a powerful scrap ensues as Matt is using a more sporting, lighter outfit than mine. The Pike makes several powerful lunges under and around the boat, he expertly negotiates the drogue cords and I scoop the Pike into the net, phew! At 18lb 8oz it’s not a monster but on this day, under these conditions, it’s a reward for his determination, well done mate. 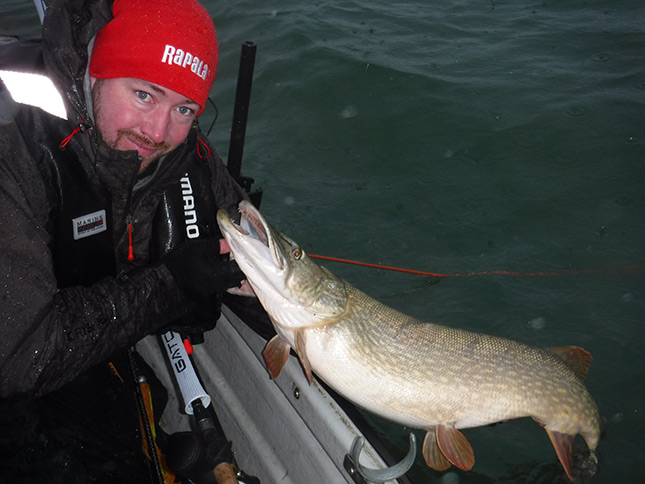 Well all good things come to an end, Anglian Water’s predator season is over for another year, I guess I started my pike quest a little late in the season but there’s always next year!