After several winters chasing Zander and Perch on Rutland and Grafham reservoirs I finally felt like a change. I'd spoken about targeting Pike on these waters with several of my regular boat partners but up until now I've not bitten the bullet and started.

A plan comes together

James Gardner my regular fishing companion had lost the desire to travel up-country to fish the Midland reservoirs for Zander so I needed to another boat partner to share the pain. Dave Ollif had asked me if I would take him lure fishing sometime to show him the basics. Dave has been very successful catching large Pike on bait but lure fishing is a whole new ball game to learn and he hoped I could fast track him into understanding the thought process required to catch Pike. So with this in mind we planned a two day trip to my favourite reservoir Rutland, this was going to be an interesting exercise as I've never tried to catch Pike on Rutland in all the years I've been fishing there.

On this trip I decided to leave all my Zander kit at home, we would have to catch Pike or blank, there would be no opportunity to bail out and take the easy option and fish for Zeds. I motored up the North arm past my Zander hot spots to an area which offered shallower water. We started in 15-20ft depth range and drifted across the entrance of a large bay; with no other boats in sight Dave couldn't believe it was possible to have so much room all to ourselves. The weed was problematical, getting the right balance between weight of lure and sink rate was the first task to work out. I tried a variety of lures, large spinnerbaits, spoons and soft plastics, getting a weed free retrieve was difficult. Dave and I worked together, if I was throwing a spoon he would cast a shad, teamwork was essential if we were going to make this work.

After an hour or so it was apparent that we were in the wrong area or depth? We moved a short distance into deeper water, 20-30ft, and continued searching. Another hour passed without any signs of Pike, what to do? Our next move saw us drifting close to the Draw Off Tower that sits in the middle of the arm. I'd caught Perch here previously so I was hopeful this feature would attract Pike too. Shock horror there was another boat in sight, but there was plenty of room for us both so no dramas, a pity the Pike weren't around because the tower and its attendant pipe looked good and gave us something to focus on. Another move was on the cards soon enough, this was proving to be much harder than I'd thought it would be. My lure selection was being well used in an effort to find something with the magic touch. The truth was I'd no idea what depth to concentrate on? As always location is the key factor if you are going to succeed, in this case it was a matter of where and at what depth?

And so our search continued in a similar vein each drift took us through a different range of depths until we reached some more familiar ground, the pipe opposite Armley Wood. I know this feature has produced Pike and I know it very well having caught plenty of Zander here, recently it's become a bit of a Perch hot spot. Today however the Pike were not at home so we moved on after a few brief drifts. I was now starting to get a little anxious as we still hadn't seen any signs of Pike. As I was completing yet another retrieve, at the mouth of another large bay, I felt a short, sharp, nip, as my lure appeared from the depths. As the fish turned quickly away I saw the silvery flash of its body leaving me in some doubt as to its identity. Its length suggested a fish of around 10lbs, it certainly wasn't a Brownie as it was far too silvery, it was unlikely to be a Rainbow although there are trout of this size in Rutland they are very few and far between, it could have been a Zander but again they're very rare and as it was only 40ft deep when I had the take I concluded that it was most likely a pike.

The bay itself looked very promising with weed beds along both banks of a shallow finger that branched off to one side; the main body had a steep shelf at its southern end that looked a good fish holding spot too, but not today. The day was getting away from us, I started to get impatient, rather than carrying on our systematic drifting approach I decided to motor down to the Limn Tower in the main basin, a quick pass over the pipe showed no signs of the baitfish that normally reside here so we moved on. 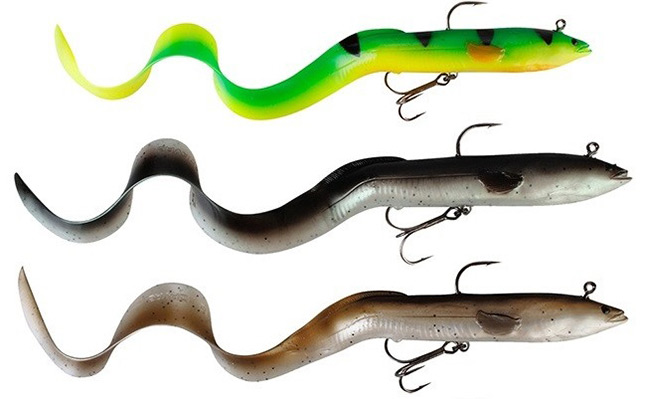 Having searched depths ranging from 15-40ft where I expected to find pike I now opted to drift through much deeper water, starting in 60ft we were going to drift through depths down to 80ft! My lure selection was a bit thin for this depth range as I'd not expected to be fishing so deep. With so little drift speed we were able to keep our lures down close enough to the bottom but how close did we need to be, and what about speed? We were both casting our lures either behind the boat or across the wind as we tried to ring the changes. By casting behind the boat and feeding out plenty of line until I felt my lure hit bottom I was able to keep my lure in the ‘kill zone’, I was aiming to keep my lure in the bottom 10-15ft. My retrieve consisted of 6-8 slow winds of the reel, my large curly tailed shad swam horizontally, gradually lifting off the bottom, and a pause would see it flutter down through the depths as it swung towards the boat. I had to reduce the length of retrieve as the lure neared the boat; the line angle gets much steeper lifting the shad higher in the water otherwise. Dave was casting across the wind, his retrieve was similar to mine but the effect of casting across the wind added another subtle dynamic to the lures path. How so? Well the lure behaves in a similar way, although it will sink quicker with the absence of line drag, all the time it's across the wind, but as the boat continues to drift the lure or more importantly the line will end up being drawn behind the boat and this does two things. As soon as the drag on the line increases the lure speeds up and lifts higher in the water and as the line straightens the lure swims around the bend, behind the boat, this combination of depth and directional change can often induces a take.

Our day was nearly over despite our best efforts it looked like we were going to blank, never mind tomorrow we would spend more time in the deep water. We were drifting through 80ft, I glanced at the sounder and noticed it was getting shallower as we drifted up a shelf, ‘it's getting shallower its only 74ft’ I shouted to Dave, when I struck at something? I'm not sure what happened as my line was completely slack? I look at Dave in my confusion and franticly wound in several feet of slack line before suddenly my rod hoops over into a fighting curve! The fish stays deep as I apply heavy pressure, I slacked the fighting drag on my reel and line purrs off as the fish makes a short deep run, before we can panic the fish appears in the clear water maybe 10ft from the surface. Dave has already assembled the landing net, it's now on the surface but a little too powerful to net so Dave lets it swim pass, a short run and its back on the surface again, this time it's ready and Dave makes no mistake! 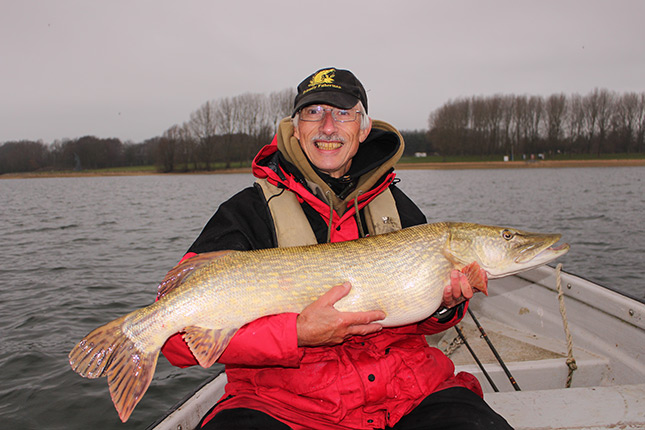 I can't believe my luck, the hook's fallen out in the net, and the fish looks fat. The scales confirm it's a twenty, 22lb 12oz in fact, I'm chuffed to bits it's been a tough day and what a great way to finish. A few quick pictures and we've just enough time for a very short drift back up the shelf before we must go in. Dave gets a well-deserved fish while I'm packing up, it's a lovely 7lb Zander, a new PB so we're both happy to pack up knowing we've made a good start and we've got another day tomorrow! 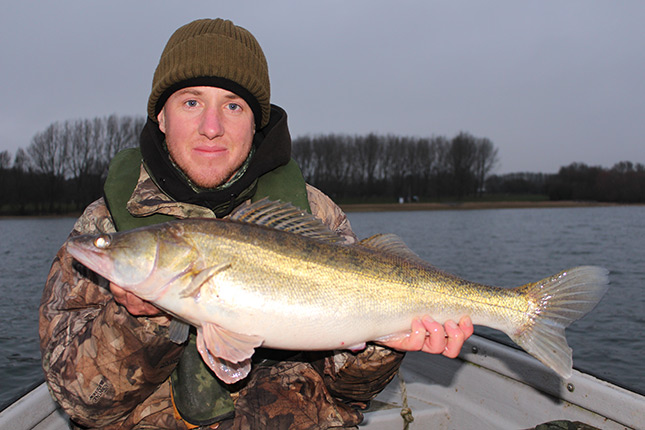 Day 2
Buoyed up by our last minute success of yesterday we headed straight back to the area that produced our fish. An hour pasted without any takes or signs of fish so we had to move on, on the plus side I know the deep water features extremely well having spent hundreds of hours drifting over them in the past few winters. We were going to focus all our efforts on fishing through 70 to 80ft of water, we knew that success would be measured in one or two takes but it's always exciting when you're trying something different, in Dave's case it was lure fishing, for me the challenge was catching Pike from a new water.

I'd like to tell you how we plundered Pike from the depths but unfortunately I only managed two takes, both of which fell off. Dave also experienced a few tentative takes which were most likely from Zander.

In summery our trip was very encouraging, we'd made a start and established a depth range to focus on which reduced the search area from 3,000 acres down to a more manageable 1,000 acres or so! James and I did manage to make another visit before the winter storms arrived, we both blanked but we still enjoyed the new challenge and as anyone who knows us will testify, if effort equals reward we won't be found lacking, we will be back.