Another change of location saw our convoy of vehicles and boats wend their way through the mountains to another huge reservoir. This water had been very kind to us on previous trips, our main target was to catch Barbel on dry flies, plan B take to the boats and fish for Zander. Our hearts sank as we launched the boats on our first day, the bay where we put the boats in was green with Algae. The continuing high barometric pressure over the following days saw only light breezes, often no wind at all, certainly not enough to shift the dreaded Algae that was obscuring our vision and any chance of the Barbel seeing our flies.

The search was on to find banks with clear water, Gary and I did manage to find one small area known as the Graveyard where we could target fish with our flies. Gary dropped me off on the bank then deposited the boat half way along a long sandy beach about a mile away. I slowly staked the shore full of optimism but slowly I became aware that the whole area was alive with Carp, again they were easily spooked so I adopted my wading tactic. I was able to approach them easily now but the water was milky white as they filtered food from the sandy bottom and blew clouds of silt out of their gills. A quick change of flies saw me tie on a gold headed Hares Ear nymph which I was able to lower into the clusters of pre-occupied fish. I couldn’t always see my fly so I had to watch the reactions of the Carp, sometimes one would lift up and take my offering, other times I just struck when I noticed a slight change in their position. Anyhow I managed to catch eight or nine Carp but no Barbel; I was so absorbed that I hadn’t managed to reach the boat after an hour or so. Gary had fared much better catching eight Barbel on dries, I’d taken so long that Gary had re-fished his way back to the boat before collecting me. James, Mark and Lee had struggled to find fishable banks so had switched to Zander fishing and had nicked a few from a variety of spots, mainly casting small soft plastic shads mounted on 10-15g jig heads, they’d fished drop offs and bays that offered areas ranging from 20-30ft. 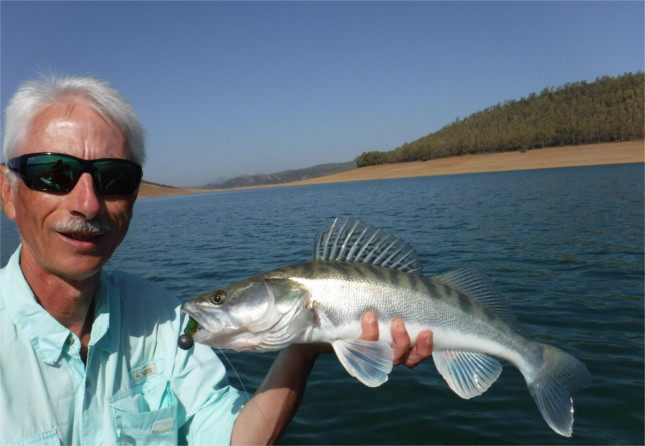 Over the next couple of days we fished all our best Zander spots but despite our best efforts it was slow going. This water isn’t heavily fished by boat anglers, as it’s not considered a good Bass water the number one species in Spain, so the Zander are not pressured. We were totally confused by the need to use such finesse tactics to catch any fish at all.

Gary and Mark’s trip was now over but James and I still had another four days to go, we re-fished some of the Zander spots again but with less success if that were possible? So what to do? The prospect of another three days scratching around wasn’t appealing so we moved on to another reservoir back up in the mountains in the hope it had clear water and no Algae. 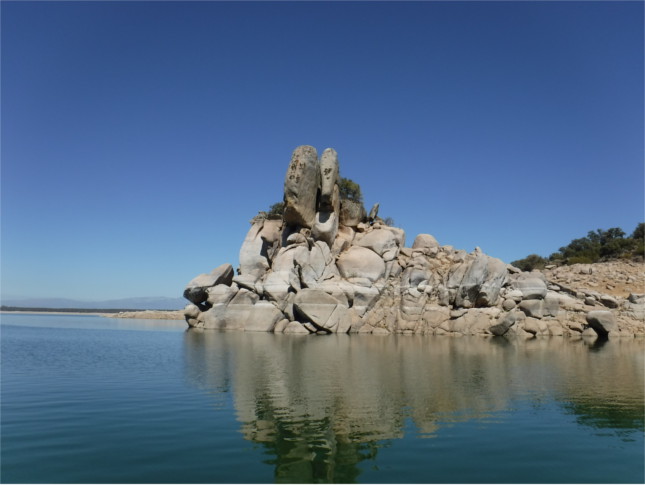 Zander like structure, what’s above the water is a fare indication of what’s below<

It was good to be back at Lee’s home water, James and I have spent several weeks fishing here in the past, we sighed with relief when we saw the water was clear. We only had the afternoon to fish, having travelled all morning, so we stayed close to the launch site. We were going to fish for Zander to access their potential having only arrived in this reservoir in the past four or five years. It was going to be exciting to see how far they’d spread and how big they’d grown. With the water level well down, below 40%, we struggled to recognise many of the features we thought we knew. We positioned the boat to drift across a point separating two bays, with depths ranging from 25 to 40ft, the gradual slope didn’t appear to have any structure to hold fish, but thankfully they were there. I’d like to say the action was fast and furious but I’d be lying. For some reason we had to fish subtlety to winkle out a few fish but it meant each fish counted and we applied ourselves to the task. Eventually we wondered away from the point making drifts through open water, we accumulated 20 Zander between us, not bad for half a day, with James catching a stunning 70cm fish around 9lbs. 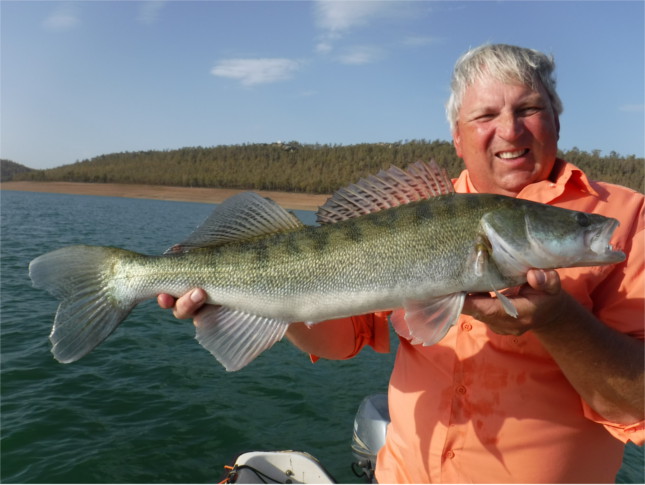 Lee put us in his new Tracker Bass boat, wow it was like being in a sports car it was so fast. We headed down towards the dam about 3 miles away, Lee had tipped us off that there were large shoals of bleak down there and where there’s baitfish there’s predators, Barbel, Bass, Pike and Zander. We eventually found a massive shoal in a channel leading to a shallow bay, you had to pass through a narrow gap in the rocks to reach the bay which is a popular launching site so we had to be careful to avoid speeding Bass boats as they passed through the gap. The Bleak were holding just inside the sheltered bay close to the rock gap and to one side of the channel, we caught Zander immediately we started fishing. By drifted through the area we managed to pick off more Zander, James even managed a bonus Bass of 2 3/4lb and a double figure Pike. As we ventured further up the channel towards the deep water a huge Pike rolled on the surface very close to the boat, its size took my breath away it was easily a mid-twenty if not bigger! 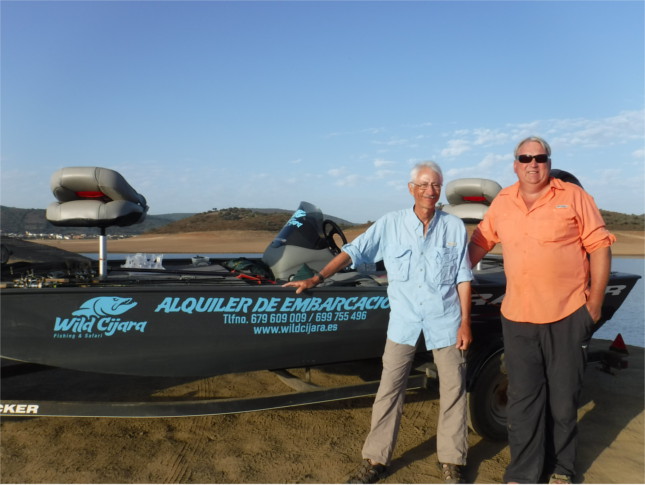 Up-river today, we checked out the bridge by “Bar la Barca” which normally holds shoals of Bleak and Barbel but nobody was home so we sped further up to the “Ferry Bay”. We were shocked how murky the water was, how little depth there was and how warm the water was, 24 degrees centigrade, despite all this we managed to catch several Pike! I was trying the Texas rig for the first time, this is where your hook is hidden inside the soft plastic lure so it doesn’t snag. I was pitching my un-weighted shad onto the gravel shore and gently inching it off the shelf before allowing it so sink slowly down the drop-off. As soon as I felt a take I had to pause and give some slack line before setting the hook, hard. I managed a few small Pike and Bass before I tangled with a 52cm Bass which weighed a disappointing 3lb 8oz, it looked like an old warrior but still on a new method I was pleased. Time slipped by too fast so we decided to finish off back at the launching bay and mop up a few more Zeds but strangely there seemed to be less co-operative than before so it was scratching time again. I managed a few on the “ice jigs” while James caught on a mixture of Spro Bony Shakers and Komodos. 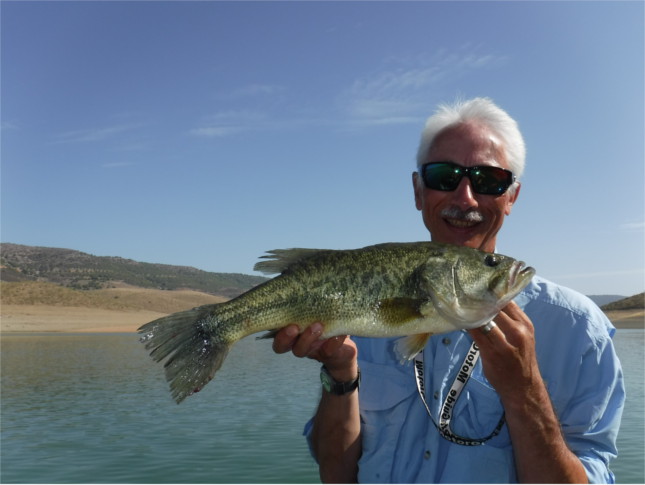 So another fishing adventure came to an end, not our most successful trip by a long shot, but if you don’t take risks you’ll never experience the excitement we’ve had when discovering a new fishing hole. 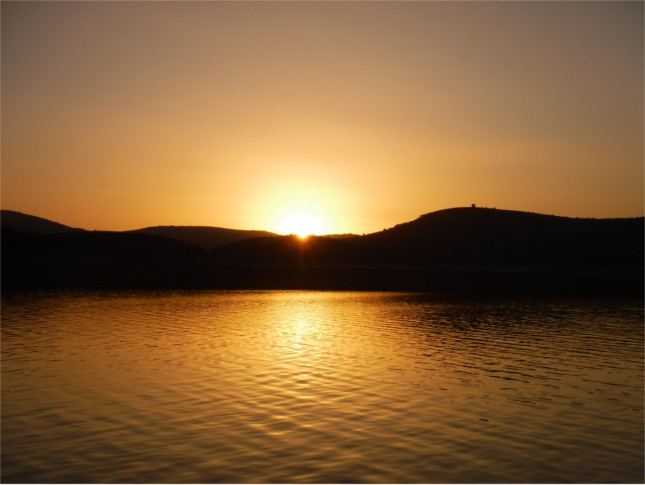 The sun finally sets on our last day