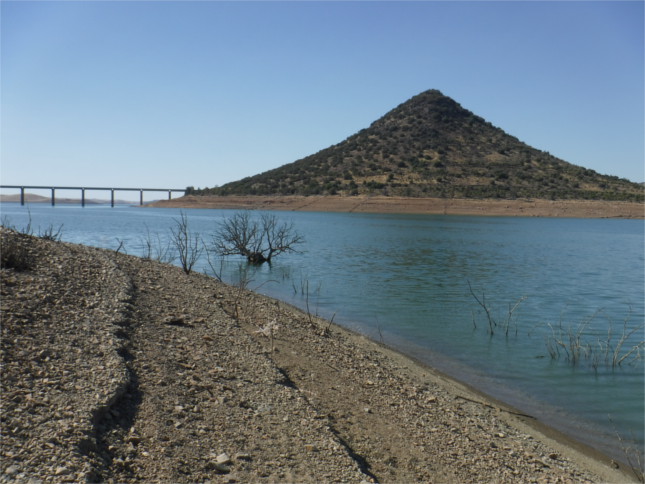 Our new home for the next 3 days

In the west of Spain lies the rural region of Extremadura, the rugged countryside is largely uncultivated with forests covering vast areas. There are two major rivers which feed a plethora of huge reservoirs here, these in-land seas provide hydro-electric power and much needed irrigation and water in this arid countryside harbours to all manner of wild life. Very few tourists ever visit Extremadura unless they’re birdwatchers, hunters, fisherman or lost. The abundance of birds of prey, Vultures, Eagles, Kites and Harriers, are what brings birdwatchers to the region. Wild Boar, Deer and game birds are the big attraction for hunters. Visiting anglers are drawn to the many wild waters that contain Black Bass, A.K.A. Largemouth Bass, and to a lesser extent Pike, yes Pike! We tend to think of Pike as a northern European species but they fare well here in these deep cold waters. My friends and I visit Extremadura in search of its Barbel, the Barbel and there are several different species we catch on dry flies, quite different from our approach in the UK. Then again these fish behave more like Chub, taking all manner of lures and flies as well as live and dead baits, so they’re a completely different animal from our Barbel!

A leap of faith

The first few days of this trip saw my friends and I fishing a new reservoir I’d briefly looked at last year, you may remember? At over 30,000 acres, forty times the size of Bewl Water my local reservoir, it was going to be an imperative to locate fish as quickly as possible. With this in mind we split up into two groups, Mark Bryant and I in one boat while James Gardner and Gary Collins teamed up with Lee Parkes of wildcijar.es Lee had organised our boats and accommodation and was joining us on this fishing adventure.

The water level was well down but fortunately Lee had found a suitable launch site for us. It’s all rather wild stuff, no organised concrete slipways, its back the trailer into the water, launch and hope you can get enough traction to drive back out of the water and park up. Mark and I had a small fast ally boat so decided to go up one of the long arms off the main basin in our search for Barbel. James, Gary and Lee having the larger, slower boat decided to stay close to the launch site in their search.

By early afternoon I was very concerned by the lack of fish, we were now walking the banks, fly rods in hand. We had covered large sections of bank and were mystified by the lack of Barbel or Carp in the margins. By leapfrogging along the banks, a successful technique we’ve used many times before, we can usually locate fish fast before slowing down to catch them. Mark would drop me off on a likely looking section of bank before driving the boat half a mile along and beaching it and walking off. I would then walk and fish the bank up to the boat before motoring past Mark and dropping the boat off another half mile past him and so on. This process means we never cover the same section of bank twice and usually we find fish quickly, the water was so clear we had to be careful not to spook fish but also we needed to walk vast distances in an effort to find numbers of fish as this would be our best chance of catching a few.

Normally the Barbel settle and feed in the margins by late morning, so we usually wait until 11am before we try to approach them, but on this occasion even by 2 pm the fish were still unsettled and easily spooked. We were left scratching our heads, a heavy footfall; even lifting your rod was enough to see them fleeing the shallows at speed. Even casting from a position 30ft from the water’s edge was still putting them on tenterhooks, my solution although not entirely successful, was to wade out past the fish and cast back towards the margins. This helped and made it possible to cast at fish but it made it a lot slower process and difficult to spot fish however I was now in the game.

We caught a few Barbel and Carp on the ever reliable Bob’s Beetle, it was noticeable that a high proportion of the Barbel here were Comizo, this species has the potential to grow to over 30lbs. After the first day Mark and I had struggled, I’d caught three Barbel, two of which were Comizo and a Carp while Mark had caught two Comizo. James and Gary had spent their day searching all the bays and creeks around the main basin near the launch site, it wasn’t until late in the afternoon that they found numbers of settled, catchable fish. James caught lots of fish, no change there then, many on gold headed nymphs cast at cruising fish which he found far easier to catch. Gary had enjoyed some success on the dries while Lee had stayed in the boat fishing vertically with soft plastics for Barbel and Channel Catfish, between ferrying James and Gary to and from the bank. 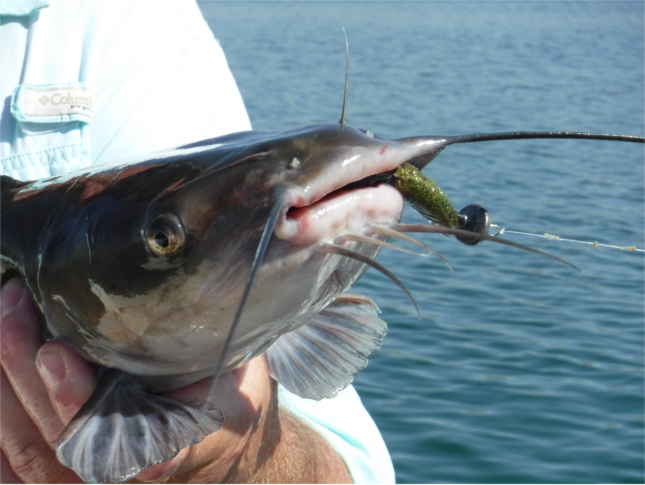 Our first encounter with a Channel Catfish

And so it continued in a similar vein for the next two days, in the souring heat, over 30 degrees every day. We searched high and low for the elusive Barbel, with such clear water it was impossible not to stumble on them if they were in the margins. It was a puzzle where were they? And why weren’t they in the shallows where they were supposed to be? Maybe the unseasonably hot settled weather and lack of wind was the cause or possibly the low water?

We visited another beautiful little reservoir which was just downstream; it contained the same mixture of species as our previous venue. On this occasion James and I were with Lee, we started by drifting through a large bay jigging and casting shads in an effort to catch Barbel or Channel Cats. The Cats were obliging and we all caught a few, the best method we found was to suspend our shads a few feet off the bottom occasionally imparting a jigging action. The Cats could easily be seen lifting off the bottom, often following our lures for some time, before descending to the bottom again. A quick jig would see them return to inspect our shads, takes were usually the result of free spooling our lure to the bottom, then slowly winding it up through the water before suspending it a few feet off the bottom, this manoeuvre prompted an immediate response. The steeper the Catfish ascended, viewed on the echo sounder, the more likely a take could be expected. I caught my first two Channel Cats in this manner so I was no longer a Chanel Cat virgin, James, Gary and Mark had already caught theirs on our previous venue. 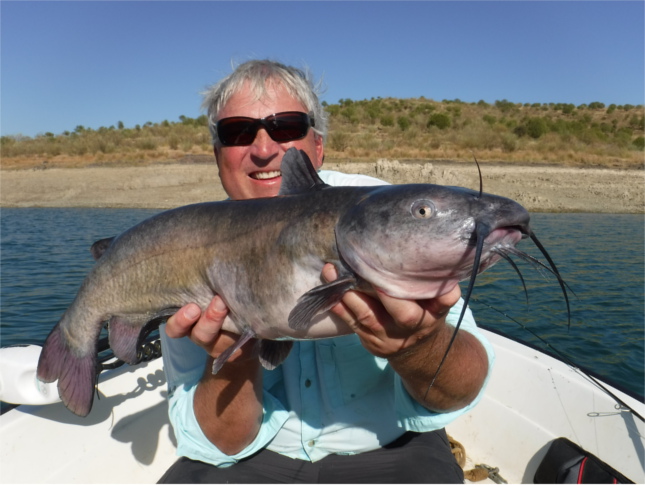