Variety is the spice of life.

Bass on the fly?

Something I’ve been meaning to do for some time, but I never seem to get around to is fly fishing for bass. So when I get invited by top bass guide Robin Howard, AKA “Fishy Rob”, to try his new venture; well I just had to give it a try!

Rob has been guiding shore anglers, mainly for Bass with lures along the South coast beaches for years. He’s recently added the option of fishing inshore from his boat, which is moored in Brighton Marina. The fishing again is mainly with lures, Bass being the target species but weather and seasonal fish migrations sees Rob offering the best options on the day.

Having recently been guiding in Russia for Salmon, Rob has seen the potential of adding “fly fishing” for Bass as an option for his U.K. customers. Bass have in the last few years taken on the mantel of sport fish, meaning that enthusiasts like me are passionate about catching them for their sporting capabilities rather than their eating qualities, seeing them swim off unharmed to fight another day is the “icing on the cake”. There’s nothing wrong with harvesting an occasional fish for the table, but that’s not why we fish for them.

I saw dawn break over the marina one Friday morning as I waited for Rob to arrive, dispelling the myth that “you can’t rush a Lush”. Two other blearing eyed anglers appeared at the meeting point so all we needed now was “fishy Rob” to appear.

Boat launched and a short trip out of the marina saw first light highlighting the surface of a calm sea. I noticed slight movements just sub-surface suggesting FISH were on the prowl. Rob suggested that surface lures would be the best option, so Neil and Brian using their spinning tackle started with Heddon One Knocker and Xorus Patchinko; both anglers were well versed with these lures and how to fish them. 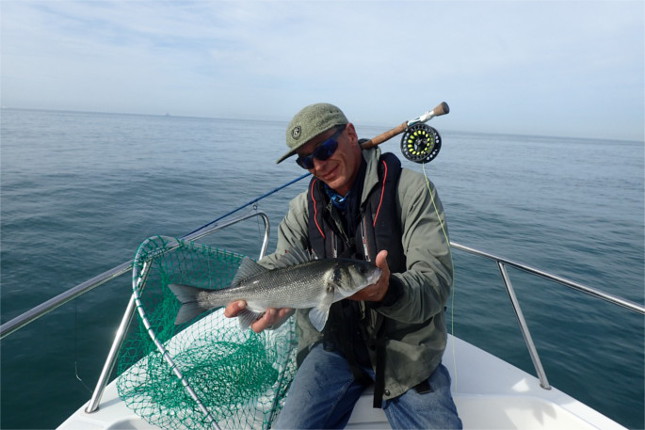 “Fishy Rob” bags another Bass on the fly

I’d brought my own gear along, the 9’ #10 rod I’ve been using Carp fishing was duly pressed into service. I selected a floating line with a red & white surface popper, which Rob had supplied. Fast stripping the popper across the surface created a blooping, gurgling commotion which was very exciting, especially when a Bass was following. This was indicated by the water bulging up behind the fly, sometimes followed by a half-hearted boil as a Bass took short, doh! Rob was also casting a fly but on a fast sinking line, so we were covering all the options.

After about an hour the tide had ebbed away to nothing so we were now on “dead slack water” and the wind had dropped too. Being becalmed is never good when you’re searching for fish, a change in tactics was suggested by Rob, we needed to go deep and fish close to the shallow reef, I opted for a fast sinking Di7 line and a weedless Lefty’s Deceiver, Neil and Brian were now using soft plastics and spoons.

The sun was now blazing and finally as the tide turned, as if by magic the wind freshened, we were on the move again. The change in conditions saw the Bass start to feed with some enthusiasm again, and we all started catching on our chosen methods. By now Neil and Brian had both taken turns on Rob’s fly rod and had both managed to catch “on the fly”, the sinking line approach was definitely proving to be more effective than the surface presentation.

I was casting up-tide as often as I could, as this kept my line taught at all times, keeping me in direct contact with my fly as I stripped the line back in 3 or 4 short sharp pulls. Rob had instructed me to keep my rod tip pointed down at the fly line, thus eliminating any slack and enabling me to strip strike when a take occurred. Takes when they came were very fast and sharp and easily missed so Rob’s advice was well heeded. Three small bass on the Deceiver was my reward but Rob took the honours with the best two fish of the morning both on the fly that would have weighed around 3lbs apiece, all in all our short 3 hour “hit and run” trip produced 22 bass, all returned to fight another day.

I can highly recommend Fishy Rob’s services, whether you fancy brushing up on your lure fishing techniques or you like the idea of catching your first Bass on the fly.

You can contact Rob via his web-site fishyrob.co.uk or email [email protected]

I’ve been wreck fishing off-shore with my good friend Mark Bryant a few times recently, catching some strange fish one of which I’d never seen before let alone caught a John Dory plus a large Red Gurnard of over 4lbs. 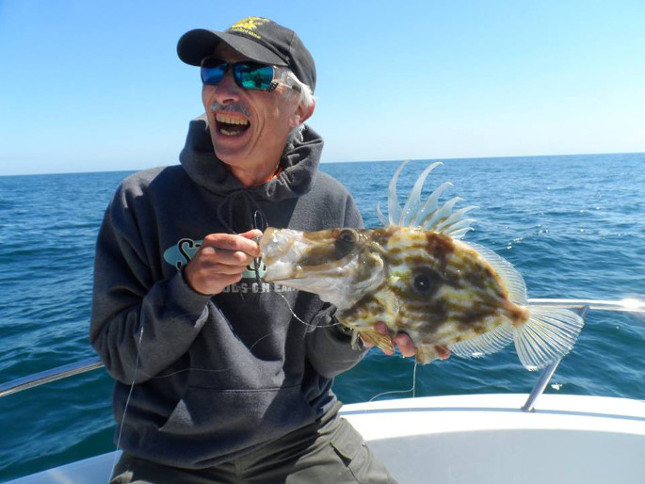 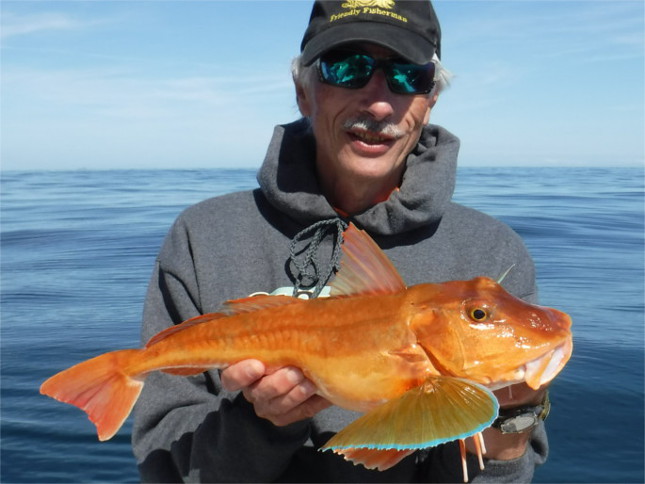 Andy’s Red Gurnard, another victim of the Fiiish Crazy Saneel

For our next trip Mark had decided to stay in-shore and fish for bass using a technique he’s mastered i.e. trolling. We motored out from Newhaven traveling east towards Beachy Head, Mark gave me one of his tried and tested Rapala Tail Dancer deep diving plugs, a lure he’s literally caught hundreds of bass on, mine was a natural Perch colour while his was Blue and Silver, we both started catching immediately we started our first trolling pass.

Not wanting to lose Mark’s lures, I watched exactly how much line he let out in order to fish his lure close to the bottom in 20ft of water. Seeing how far back my lure was on the surface before I engaged the reel gave me a guide to how much line I needed to let out subsequently after each fish!

The first few trolls produced fish for both of us but then something changed because I was still catching but Mark’s takes had dried up, why? It certainly couldn’t be anything I was doing because Mark was driving the boat over his spots and he’d chosen the lures, so what could be the reason? Mark is a very good lure angler and his next question was very telling indeed. He asked me what diameter of line was I using? I was using my new St Croix Legend Elite rod for the first time and to be completely honest I had no idea what line size was on my reel, but I’m nothing if not meticulous about marking my spools with this information, 0.17mm was the answer. Mark’s line was much thinner, 0.10mm Spiderwire Stealth Smooth 8; this meant his lure was fishing much deeper than mine, so purely by chance my lure was where the bass wanted it. Mark quickly picked up another outfit, loaded with a thicker line and started catching Bass once again, pure class! After that it was fish for fish, only once did we have a double hook up which was surprising considering the number of fish we caught. I was doubly fortunate in catching the biggest fish of the day at 8 1/2lb. Once again all our fish were returned as Mark is a stickler for not taking bass, especially as they are rather scarce at the moment. Despite our success today bass are struggling to recover from overfishing hence the strict, one fish over 42cm, per angler, per day, restrictions that are in force at the moment. 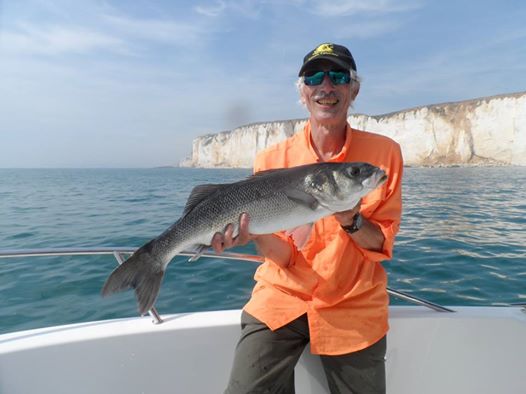 Finally I’m looking forward to getting back on the reservoirs that will be my home for the next few months. I’ve been busy sorting all my lures, dis-guarding blunt or rusty hooks and organising my tackle boxes so everything is in its place. I’ve re-spooled a couple of reels with new super smooth braid so I can be confident I have whatever I need for every situation.

At the shop, The Friendly Fisherman I’ve been busy putting together a selection of lure fishing outfits to suit all styles of lures in a wide range of casting weights for the season ahead.  If you’re thinking of starting lure fishing it’s well worth looking at the Pike & Lure Fishing Kits on our web-site www.thefriendlyfisherman.co.uk

It’s good to see that Bewl will be offering pike anglers the opportunity to once again fish with their favourite species using their preferred methods, deadbaits for the bait anglers and trolling for the lure anglers.

There are 4 days in November 8th , 11th, 22nd and 25th, Bewl has a track record of producing some very large Pike although not many recently, but then again it hasn’t had a lot of serious pike anglers fishing it since the changes in fishing regulations. It will be interesting to see what gets caught and whether any pike anglers take advantage of the extended boat season which now runs to the end of January 2018!  Bewl fishing lodge 01892-890000 post code TN3 8JH