Another month has slipped by in a flash, our weather is never dull the intense heat of summer was quickly replaced by the more bearable wet and windy autumnal weather. Having enjoyed two successful Pollack trips last month I was eager to get out again but with no breaks in the weather another trip offshore didn’t materialise, so what to do?

Carp on the fly?

After my brief trip carp fly fishing with Ben Jones last month I decided to have a go myself so I selected a venue where I could expect to get plenty of action, and where casting wasn’t going to be an issue either.

So I arrived one Sunday afternoon at Falkenvil , AKA the Mushroom Farm Hailsham BN27 2RJ. I was made very welcome by the bailiff who seemed slightly bemused by my intentions. The lake I selected was long and narrow, all the anglers were fishing down one side where they could conveniently park behind their swims. Feeling slightly awkward like “a fish out of water” I elected to fish the opposite side well away from prying eyes.

I fed a mixture of floating particles, the Nash ‘Riser Pellets’ are amazing, the Carp came up and stayed up while they consumed every last morsel “packman style”. I also fed a mixture of Cat biscuits, Chum mixers and floating Trout pellets. The idea of feeding a mixture of shapes, sizes and colours of floaters is to condition the fish into accepting everything that floats. In doing this they become less cautious of unfamiliar baits which meant I could use a variety of flies, Dog biscuit imitations and Hopper Poppers, more about these later.

My first visit to the Mushroom Farm was so enjoyable that I returned a few days later with my friend James Gardner. We both caught several fish ranging from 4lb to 12lb, it was interesting how our tactics differed. James was fishing an open bank with no marginal cover so he concentrated his feed about twenty yards out while casting slightly further downwind so his feed would drift around his fly, very sneaky. I on the other hand had chosen a swim with some bankside rushes, by keeping low and steadily feeding slightly shorter each time I introduced more floaters I was able to draw fish close enough to select individual fish. 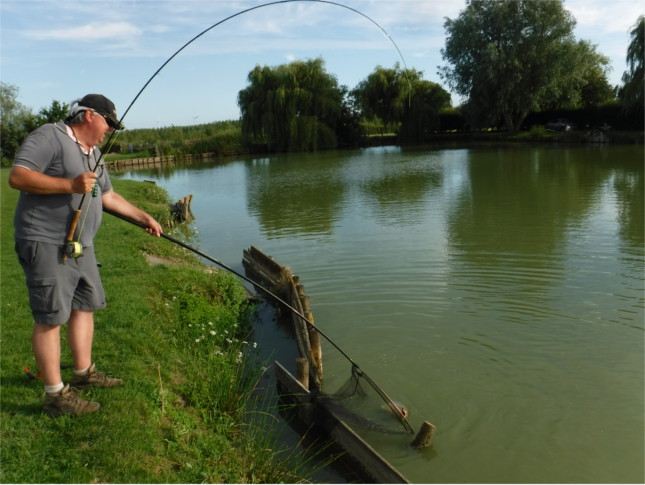 In our short 3 to 4 hour evening trips, yes James and I made several more visits, we were having so much FUN, we caught around a dozen fish each, on each occasion. I noticed the Carp would shy away from my Deer hair ‘Bonio’ flies, at first I thought the fluorescent wool, a “visual aid”, was putting them off, trimming this off seemed to help. By switching to ‘Hopper Poppers’ a fly that sits partially through the surface, instantly improved my catch rate, interesting?

I got so enthused with the fishing I even started tying some experimental fly patterns. As I mentioned earlier I’d noticed the Carp’s reluctance to take the Dog biscuit imitations and I wondered if the hook could be putting them off? So I tied some biscuit imitations which I glued some lead wire to the top of the hook shank, the idea was this would flip the hook up-side down, genius!

Well they worked, but not in the way I’d intended, the weight was not enough to flip the hook over but what it did was create a nice flop as the fly landed, “ringing the dinner bell” to any Carp cruising nearby, the fact that the fly sat lower in the surface also seemed to give the fish far more confidence to “eat it”.

Having made this discovery I found by simply trimming the commercial ‘Bonio’ flies a little more, thus reducing their buoyancy, made them far more acceptable to the fish too. So I’d gone full circle and found the most successful flies were in fact the ones I’d started using in the first place, I’d assumed the fish were rejecting my flies because they were cautious, a classic example of “over thinking” a problem. 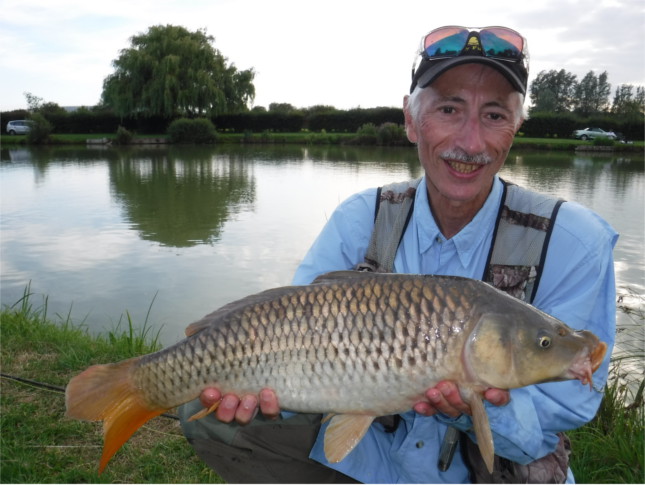 Time for a change

I was having so much fun but I fancied a change of venue, to challenge myself, I wanted to see if I could catch elsewhere, the next water I tried was Hartley Lands near Cranbrook Kent TN17 3PS.

I approached the “reservoir” lake with some trepidation, it was very windy on my first visit, and at first glance a lot of the available swims were going to be impossible to “fly cast”. I did a quick circuit of the lake and decided to fish under the trees at the top end of the wind which afforded some shelter. I’d spotted a few fish in the margins immediately I’d scattered some floaters on the surface, although casting was going to be a problem, by “roll casting” I could present my fly 10ft to 15ft out from the bank.  This was far enough as the fish seemed happy to come in very close, my chosen swim had a bramble patch between me and the water’s edge, with a canopy of trees behind me which prevented me being seen on the skyline, I could stand close to the water’s edge without spooky the Carp, game on!

It was so exciting to watch the fish circulating around the swim as I introduced my freebies; I was in the perfect position to select which fish I wanted to catch! It wasn’t always quite that simple as unseen fish would often dart from nowhere and engulf my fly which was intended for a larger specimen, madness!

In my two short evening sessions at Hartley Lands I caught 20 fish on each occasion ranging from 6lb to 14lbs, I was blown away! I found that as soon as I hooked a fish, if I let it swim out into open water I could introduce more floaters while still playing the fish, by doing this I could keep the Carp feeding, in fact they even seemed to be excited by the splashing of the hooked fish. Once I’d un-hooked and returned my fish I could expect to hook another instantly! And so it went on until I’d had enough, the fish were still game even if I wasn’t, brilliant fun but maybe a little too easy, so where to next?

As you can see I’ve been having so much fun this month that I’ve hardly given a thought to the new predator season that’s just around the corner. I’ll soon be targeting Perch and Zander on Anglian Water’s reservoirs again this season.  I’m looking forward to trying some new lures and hopefully mastering some new techniques, I might even try catching some Pike. I’ve not specifically targeted Pike on Grafham or Rutland, although I’ve bumped into a few up to 20lbs while fishing for Perch in the shallower water, so who knows what might happen? 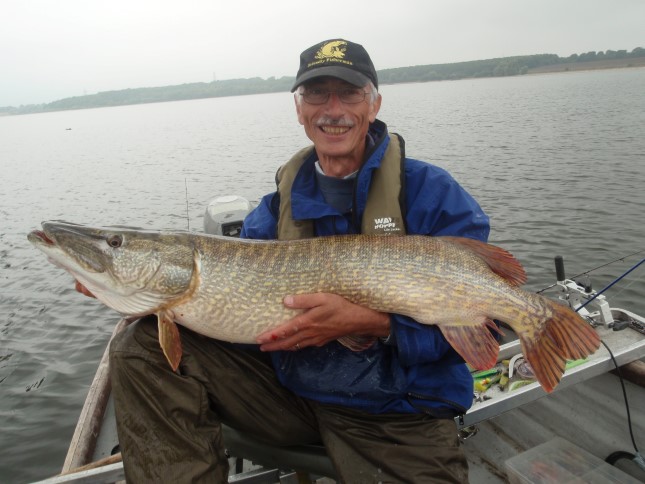 Andy with a Grafham reservoir twenty

‘The Friendly Fisherman’ is the home of “predator tackle”, owned by Andy Lush, the store is in Tunbridge Wells [TN1 2PS].