As one door closes another opens, but which one?
The advent of summer saw a dramatic change in weather and a rapid decline in my fly fishing results, time for something different.

Fly fishing for carp
I’d been meaning to share an evening with Ben Jones, an angling companion of my sons for some time. With the heat putting pay to trout and predator action, it now seemed a good time to try catching some carp a fish that really enjoys the warm weather. Ben has been having some terrific sport this season with two fish over 30lbs and several twenties too! I was keen to learn from someone who clearly has it sussed. 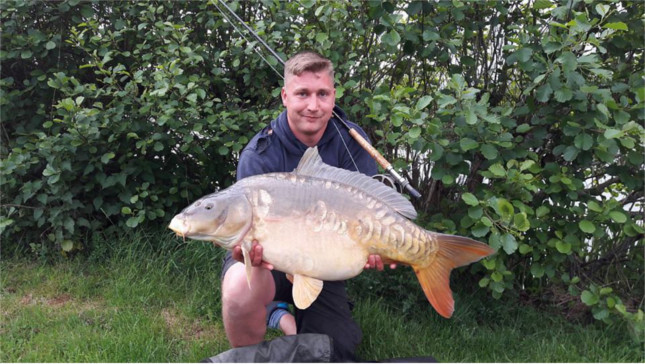 
The evening in question was rather breezy making it difficult to concentrate the fish, Ben was trickle feeding a mixture of Nash Riser pellets and dog biscuits in an effort to draw fish within casting range but despite his best efforts the swirling wind was in fact spreading the feed so a change in plans saw us move to a smaller more shelter lake nearby.

The plan worked as Ben started catching a succession of small carp on a mixture of deer hair mixer imitations and slow sinking bread flies. I on the other hand was struggling with my heavy floating pike fly line that wouldn’t lay straight on the surface, instead it did a passable imitation of a slinky with the bottom coils sinking, making it impossible to set the hook on the few offers I was getting! Note to myself buy a new floating line before my next trip.

By now Ben had them queuing up to take his bread fly, he even caught them while retrieving, “the riser pellets were working their magic”.

I moved to the windward bank as there were fish hugging the margins here, this allowed me to cast my fly with only the leader on the water, with my fly line laying on the bank stopping the coils forming. I was now in the game but the carp were ignoring my biscuit fly, “what to do”, time was running out. I rummaged through my fly boxes and selected a large Booby trout fly with bright yellow eyes and a yellow marabou tail. First cast and a fish that had ignored all my previous offerings immediately swam over and sucked it in, bingo!

Another fish fell to the same fly shortly afterwards which only goes to show, what we all know, it’s always worth trying something different when fish are playing hard to get.

Friendship
Angling has brought me into contact with loads of very interesting anglers, a few have become close friends; Mark Bryant is one such person. Mark and I have shared many days afloat targeting everything from pike and trout to Spanish barbel and more recently bass and pollack.

With the heat my enthusiasm for trout and predator fishing had evaporated, so when Mark offered me the chance to join him on his boat for an offshore wrecking trip, I jumped at the chance. 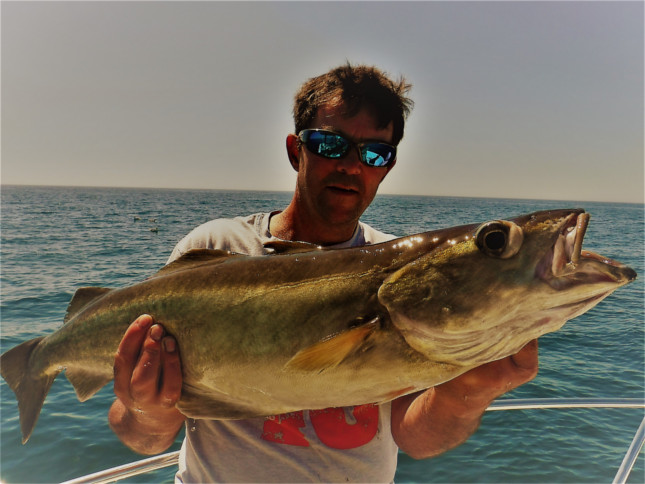 Mark Bryant with a 13lb Pollack


Now Mark and I have caught plenty of bass while vertical jigging with mini pirks, on light spinning tackle when fishing shallow water wrecks inshore, but this trip was going to be for pollack in deep water, so on this occasion I was going to use some of his stepped up gear.

New skills to learn
Pollack can be caught on pirks; pirks are very effective when fish are feeding close to the bottom. But when fish are higher in the water as Pollack often are, presenting soft plastic sandeels and shads on long, 10-15ft traces, attached to a flying collar boom is a better option. This combination allows you to search the water column from the bottom up to 40ft off the deck.

The trick is to delivery your lure to the bottom without an almighty tangle! Mark demonstrated how he does it, he first dropped my Fiiish Crazy Sandeel over the side letting the current take it downtide, the lead was pitched in next as the line tightened, he then disengaged the reel and carefully thumbed the spool preventing the lead dropping too fast and tangling. Once the lead hits bottom the reel is put back into gear and the fun begins.

A steady retrieve, which also requires you counting the spool revolutions, sees your lure swimming up off the bottom, usually 20 turns is enough unless you feel a fish mouthing your lure. When a fish is plucking your lure you continue winding until everything locks up as a fish engulfs it, normally this happens before you reach 40 turns. After each retrieve you lower the rig back to the bottom and repeat, all the time you are watching the echo sounder for indications of fish and of course the presence of the wreck itself.

It sounds pretty easy but you have to adjust your retrieve to reflect the tide’s speed. When the current slackens it can pay to increase your retrieve speed and slow down when the tide picks up again. It’s also worth changing lead sizes too, downsizing leads on slack water gives a more subtle drop while a heavy lead is necessary as the tide quickens to control the lures path as you retrieve, too light and your lure planes up off the bottom too steeply.

Pollack takes are exciting, you either get a series of plucks or you feel the line growing heavier as you continue reeling, either way the rod finally loads up before the fish crash dives towards the bottom and the wreck. Exciting stuff, it’s now time to grit your teeth and hang on as you try to coax it away from the structure.

The beauty of sea fishing is you’re never quite sure what you’re going to catch next, although each wreck seems to be inhabited by one main species you will occasionally catch other fish which all adds to the fun. On the wrecks we were fishing pollack were the dominant species the only other fish present were prey fish, pouting and mackerel.

Reccy
We targeted several wrecks over 30 miles out in mid channel, Mark wanted to hit a few new marks that he’d been given, so on slack water we motored around checking to find their exact locations. Wrecks can move over time, especially after storms and some just disappear presumably just breaking up?

The fishing
We had a quite start to our trip but gradually as the tide picked up we started catching on our sandeel imitations. I was using a Khaki colour Crazy Sandeel than looks very close to the naturals while Mark was using a Sidewinder in Rhubarb & Custard, orange and yellow. Each drift brought a few bites and the occasional fish, when takes dried up we moved to another nearby wreck.

It’s always exciting as you see, at first a scattering of fish on screen before the wreck gradually appears and you wonder if you’re about to get a take and then, what will it be? Our day had several flurries of action on the first few drifts over each new wreck before petering out. During the slack water periods we were either researching other wrecks or just marking time waiting for the tide to flow again, as this triggers another feeding period. 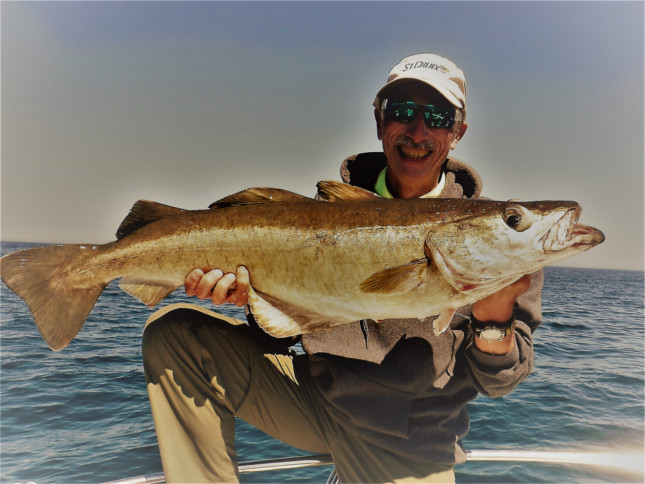 Andy Lush with his 15lb Pollack


Days afloat in calm conditions, with warm weather, are to be enjoyed because they are so rare, factor in good company and a few hard fighting fish and you have to ask yourself, can life get any better?

‘The Friendly Fisherman’ is the home of “predator tackle”, owned by Andy Lush, the store is in Tunbridge Wells [TN1 2PS].
A huge range of lure tackle is available in store or on-line www.thefriendlyfisherman.co.uk