Spring is my favourite time of year, a time when I’m always torn between lure fishing and fly fishing.

With the freshwater predators about to spawn it’s a very temperamental time of year, and with the May water algae bloom affecting the sea along the coast bass fishing isn’t an option either.

Last spring my fly fishing played second fiddle to perch fishing, it was that good! So it was inevitable that this year I’d been drawn back to fly fishing and my favourite reservoirs.

As I drove to Bewl Water it was with a mixture of excitement, trepidation and anticipation.

Excitement? Well I was going fishing, what’s not to get excited about. Trepidation? As I consider Bewl my home water, this was going to be my first visit there since June of last year, so I was going to be tested today. Antisapation? I was going to be fishing with my old friend Peter Cockwill; I’d been looking forward to sharing a day with the maestro ever since we had made the arrangement.

A mixture of old and new faces greeted me at the impressively refurbished boat house bistro, as I grabbed a coffee Howard McKenzie gave a brief speech, filling us in on the latest developments at the water. He was pleased to inform us that the new owners Markerstudy Group had completed the replacement of the old, narrow fishing boats, with the wider more stable Coulam 15ft Defender boats, much favoured by the major midland reservoirs. He was also confirmed that the popular Bulldog strain of Rainbows would again be stocked this season as these seem well suited to the water and thrived once released.

As the local expert, allegedly, it was going to be my responsibility to find the fish. As it was early May I imagined the fish would be “up enough in the water” to be heading up-wind, picking off small food items brought to them by the wind driven current. With a light north easterly wind blowing off the dam wall I elected to set our first drift from the far corner of the dam down along the Chingley Woods bank. We started about 200yds off shore, I deployed the drogue so we could slowly work our flies through the upper layers of water the light breeze would push us towards the bank so we were going to make a series of short drifts, in an effort to keep us in the best areas. 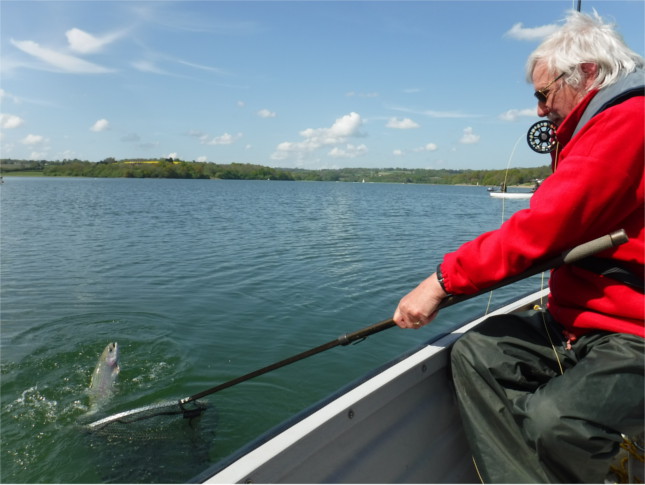 "Get in", Peter Cockwill scoops a lively Bewl Rainbow 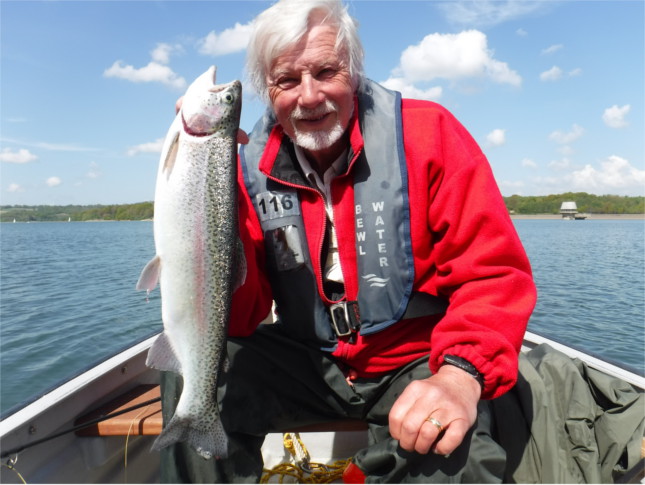 The end result, Peter Cockwill with another Bewl Rainbow

I unsurprisingly opted to use my now favourite Lee Wulff Predator line, with its 12ft intermediate sinking tip, this allowed me to sweep my flies down and back up through the water column. My team consisted of a FAB Blob on the point with two skinny nymphs on the droppers, the buoyant point fly allowed me to use the washing line system, spreading my flies horizontally through the water. Peter elected to keep it simple and fish a full floating line with a 15ft fluorocarbon leader; a black weighted Tadpole with a fluorescent green thorax was his point fly, his single dropper was a black Pennell.

As we neared the end of our first drift, approximately 50 yards out, I told Pete to expect a take at any moment, as we entered the kill zone. One cast later and Pete’s into our first fish of the day, shortly after this my middle dropper fly, a black Diawl Bach with a red holographic rib, is taken as I hang my flies at the end of the retrieve. Excellent, the pressures off, I can now relax having located some feeding fish. I spoon my fish and find a good helping of Daphnia in it, a good sign, I spoon Pete’s which contains some mini Buzzers size 16-18 so they’re clearly feeding. 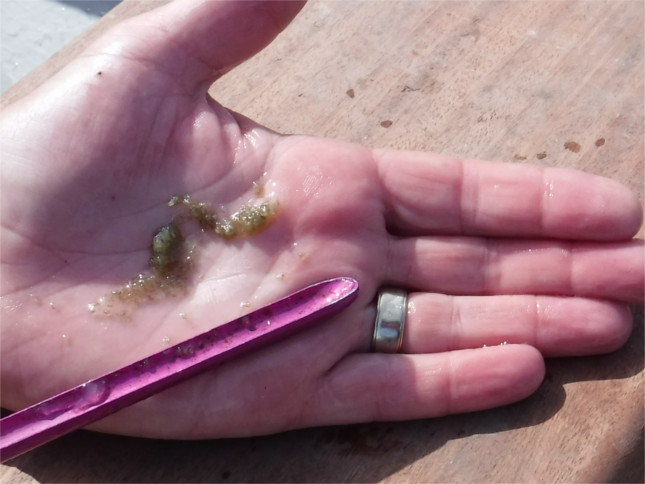 We systematically make more drifts through the productive area with Peter adding another two fish to his bag and also getting several more takes as he retrieves his flies. I catch another fish which again falls to the same dropper fly on the hang again, odd? By now I’m thinking my flies must be fishing too deep as I’d not getting any takes on the retrieve only on the lift as my flies hover just under the surface. This gave me something to ponder on over lunch?

Peter had an appointment in the afternoon which left me to fish alone, I immediately headed back to the area we’d found fish in the morning. Decision time, before changing my fly line I chose to change my point fly, off comes the FAB and on went a more buoyant Woofta Booby. The next two drifts produced two more fish this time on the Woofta, but still on the hang, not retrieved!

It was now obvious that the fish were shallower than my flies were fishing, a common mistake that many anglers make on Bewl. With the lack of any signs of surface activity, it’s easy to think the fish are deeper than they actually are. I had to take my own advice, advice I’ve given countless times in the shop, if you’re struggling on Bewl “go shallower”, even if you’re using un-weighted flies it’s sometimes necessary to add a buoyant fly, Booby or FAB, to your leader to hold your flies up and allow you to fish slowly, at times almost static, just keeping pace with the drift speed. Despite not seeing fish you have to believe the fish are there, because they are more often than not.

I now change to a floating line with a midge tip, 5ft intermediate sinking tip, with the same team of flies. This allows me to trickle my flies much shallower, just sub-surface, I’m much happier now that I can now fish more slowly and stay high in the water. Everything is perfect when, the breeze dies, becalmed I’ve stopped drifting so I’m not covering water or fish, the fish become unpredictable without a current to swim into, what to do? 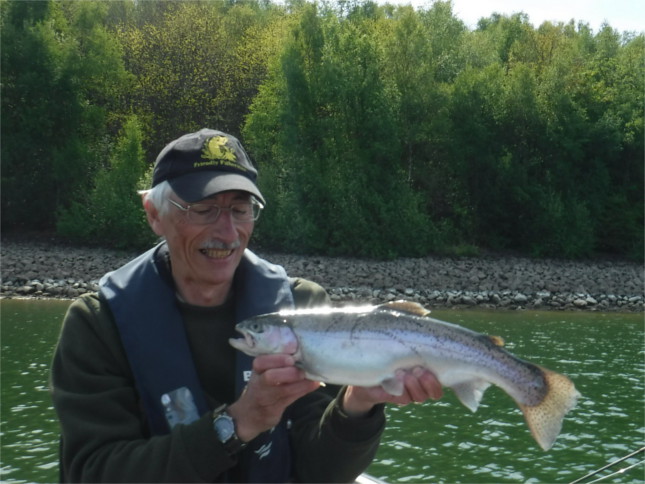 Andy Lush enjoys some action too

I have to move, go in search of a ripple, I need some wind, not something I’m normally short of, just ask my boat partners! I try Canoe Club Corner, Hook House, Bramble Point and finally Hook Straight. The further I venture down from the dam the greener the water becomes, the algae is on the surface but underneath its clear, thank goodness. I spot some fish near Pine Bay but they’re moving too fast up-wind and pass me before I can cast at them. Eventually I end up in Browns Inlet; the green water is drifting across the entrance but not into the bay, in fact it’s quite clear there. I start a drift and immediately hook a fish, very close to the bank, I notice occasional swirls further down-wind in the margins, so there’s more fish here! Next cast my line straightens and draws tight as a fish takes my Diawl Bach, I see it flash under the surface then suddenly slide across the surface as another fish takes my point fly. I’m now playing two fish at once which tests my #5 weight rod to the very limit. I patiently play my fish until the fresher, point fish, tires and rolls on the surface, I scoop it up before quickly scooping up the other, wow! Both fish are over 3lbs, in fact all bar one today has been over 3lbs, the best weighing an incredible 4lbs, and all in fantastic condition.

If anyone doubts if it’s worth fishing Bewl since the introduction of any method fishing and the change of ownership should give it a chance by spending a day afloat before deciding. Fact, Bewl is stocking between 1,000 and 1,500 fish each and every week of the season, so I would say an emphatic yes, Bewl is still worth fishing.