It’s been another lean month for me, one minute it’s spring, the next it’s summer, then back to winter again, I don’t know if I’m coming or going and nor do the fish. The annual migration of predators, pike and perch, to the shallows in their spawning recital has been interrupted by the changeable weather too.

Last year you may recall Rikki Cooper and I blitzed Weirwood reservoir catching perch the size of which neither us could have dreamt of. In our arrogance we thought, with our previous experience, we would just pick up where we left off but that hasn’t been the case. On my three visits this year, without Rikki, I’ve struggled only catching a single fish on each occasion to save a blank, two small jack pike and a 2lb perch. Rikki on his guiding days* has fared slightly better with one exceptional day producing three perch over 3lbs. That one “red letter day” has been the exception rather than the rule on what has been rather disappointing fishing so far.

So what had changed?

Our lack of consistent success has made it very difficult to work out any patterns this year. Rikki has found his most productive depth range has changed with the fish heading into deeper water, but why? We’ve puzzled long and hard as to why things have changed so much? Here are a few of our random thoughts; I hope this gives you some idea of our thought process as we try to solve this puzzle.

Pressured fish, wised up to our tactics?

Could the perch have learnt to avoid our lures when they’re dragged along the bottom? Is it possible that the presence of the boat or the associated noise, such as our echo sounder, is making them wary?

With a dry winter and few storms Weirwood is so much clearer than it was last spring. Could this be the factor that has changed the perches behaviour and location? Another factor could be the paddle system that has been installed by the water company this circulates huge amounts of water in an effort to improve water quality. I’m not sure what if any effect this is having on the perch but it’s something else that wasn’t there last year and might explain their change in behaviour?

Last summer and again this spring has seen large numbers of crayfish being trapped and removed. We thought this reduction in crayfish numbers would enhance our chances as perch would have to forage more. We did come to the conclusion last year that the productive 15 foot depth band was due to the fact that this was where the crayfish lived, this could be the most obvious reason why the perch have moved? 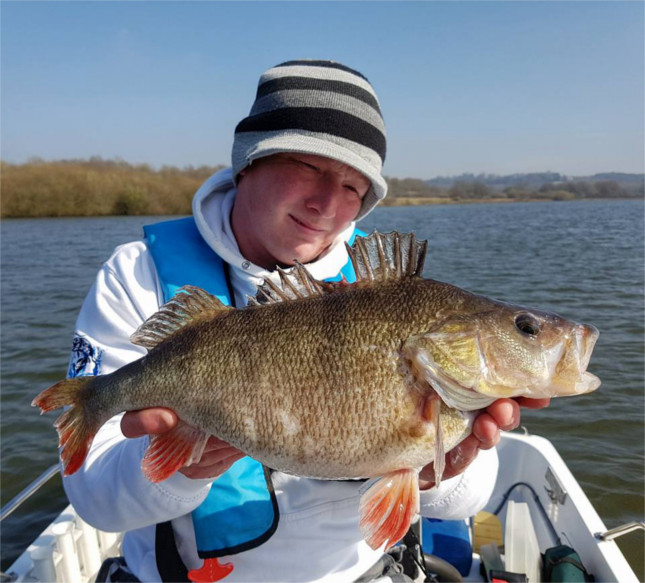 Rikki displays an old warrior of over 4lbs

On my recent visit to Weirwood with Rikki Cooper we worked hard all day fishing all our hot spots with little reward. We then worked the same depth band further up the reservoir in an effort to locate fish that might have strayed from the humps, a series of gravel bars that had been very productive when we first started fishing the water last year. I suggested we try the south shore as we’d rarely given this much of our time. It’s funny how easy it is to dismiss areas almost completely if you’ve not been successful there on your first attempts. It’s also very easy to only focus on spots that have produced as you learn the water, after a while you routinely hit all these favourite spots. Catching fish from these, hot spots only goes to reinforce your confidence in them, very soon you find you’re only catching off these spots, it becomes self-fulfilling as you can only catch fish where you fish.

A change in tactics

Rikki and I kept on grinding it out, despite our lack of success I was in no hurry to go home.

The weather for once was superb and I was enjoying basking in the warmth, even if the fishing wasn’t holding my attention, I wanted to stay. I suggested we try something completely different as our dragging crayfish technique clearly wasn’t working. My plan was to troll deep diving crankbaits, as close to the bottom as possible at 2mph, the idea was to trigger an aggressive reaction rather than a feeding response. This tactic had worked for James Gardner and me on Weirwood and other reservoirs in the past so it was worth a shot. We trolled across the humps then along the dam wall and finally around some bars on the south shore. I’m first to get a hit which results in a small pike, Rikki quickly has a jack too, at least we’re getting some action now. We re-trace our route but this time from the opposite direction, we both have takes simultaneously as we cross the dam wall, unfortunately Rikki’s comes unbuttoned while mine stays on, a welcome 2lb perch. We’re pretty sure Rikki’s fish was also a perch so maybe we’re onto something? Unfortunately this discovery comes too late in the day as the electric engines battery is now flat and we lose speed. This flurry of action had certainly given us a lift as we packed up. It only goes to show that when what’s been working, stops, there’s no harm in trying something different, you never know you might discover the next devastating tactic that could unlock the water? 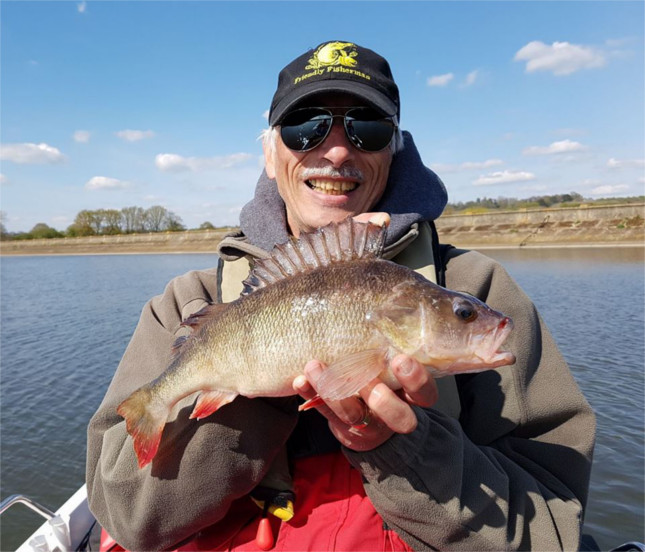 As one door closes, another opens

As you can see my lure fishing has been a real struggle of late so this month has seen me spending more time on my other passion, fly fishing for trout. What could be better than fly fishing in the spring, especially when the predators are starting to get the urge to reproduce. In fact I’ve really enjoyed revisiting some of my favourite reservoirs that I neglected last year when I focused on perch fishing. Sometimes a change is as good as a rest.

Till next time, tight lines.

‘The Friendly Fisherman’ is the home of “predator tackle”, owned by Andy Lush, the store is in Tunbridge Wells [TN1 2PS]