The end of March and we’re in Holland chasing predators before the seasons close, James Gardner and I are joining our good friend Willem Stolk AKA the” Perch Magician” along with our Fenland friends Andy Blazey and Rik Wesley.

Our first day and Willem takes us below the motorway bridge into the area known as ‘Haringvliet’. The water is clear here and our plan is to target the margins on both sides of the river. Casting our lures into the shallows, against a strong North Easterly wind makes it difficult to get the balance of lure weight right. Too heavy and the lure drags along the bottom, too light and it’s impossible to prevent the wind putting a huge bow in the braid, pulling the bait out of the desired position. The other factor to consider is, depth and speed, we’re drifting along the shoreline casting into depths as shallow as one metre and as deep as three or four meters. It’s important to have a selection of lures pre-rigged on a variety of jig heads ranging from 7g up to 14g, so we can chop and change to suit the changing conditions.

Holland had been enjoying a spell of early spring weather preceding our trip but inevitably a cold blast of Northerly winds had seen winter taking hold again. During the warm spell the Perch had gathered in the margins, preparing to spawn, and Willem and his guests had shared some fantastic catches of Perch but the changeable weather had seen them disperse and develop “lockjaw”, well that’s our excuse anyhow.

We systematically worked the now familiar shoreline, some spots held happy memories for us, places where 4, 5 even 6lb Perch had snaffled our soft plastic shads! However on our first day it was jack Pike that were engulfing James lures, in the end he’d caught 5 Pike including a stunning fish of 21lb. This last fish looked as if it belonged in a Trout reservoir, it was that chunky! My only take on this blustery day was a nice Perch of 3lb 4oz; Willem also caught a Perch of 4lb 8oz, so there was still a chance of us contacting a decent fish or two over the next two days. 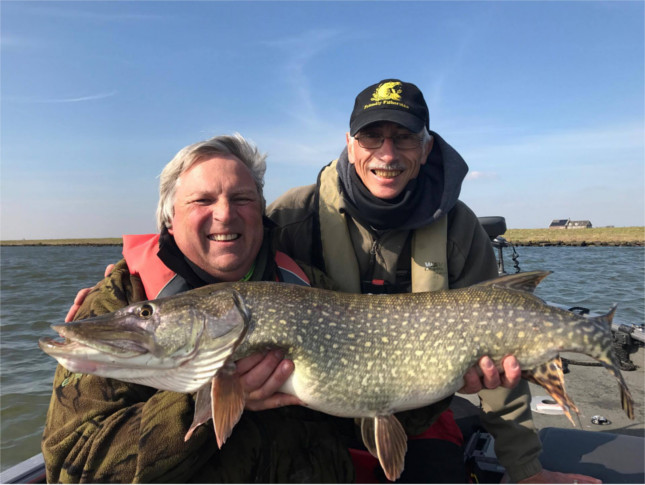 We had planned to fish deep water on our second day, when we would be fishing with ‘Adge’ whose specialist knowledge of the mid-river structures, in the ‘Hollands Diep’ section, would be vital. These open water features are created by spoil, dredged from the various harbours along the river, being dumped forming a series of shallow humps that are forever being eroded by the flow and wind driven wave action.

A slight change in plans saw me fishing with Rik Wesley, as Willem insisted on James staying in his more stable boat as another rough day was forecast.  Rik is a master at casting lightly weighted shads downwind and gently fishing them back through the choppy water, a skill that I could not match, so I quickly conceded defeat and decided to concentrate on “vertical” jigging. By watching the sounder, intently, and adapting to the constant depth changes I was able nick the odd fish every now and then, a few Zander, a surprise jack Pike and a plump Perch. I even managed another stripy when I briefly tried casting but my back was hurting enough to distract me from the task in hand, so I quickly reverted back to jigging. 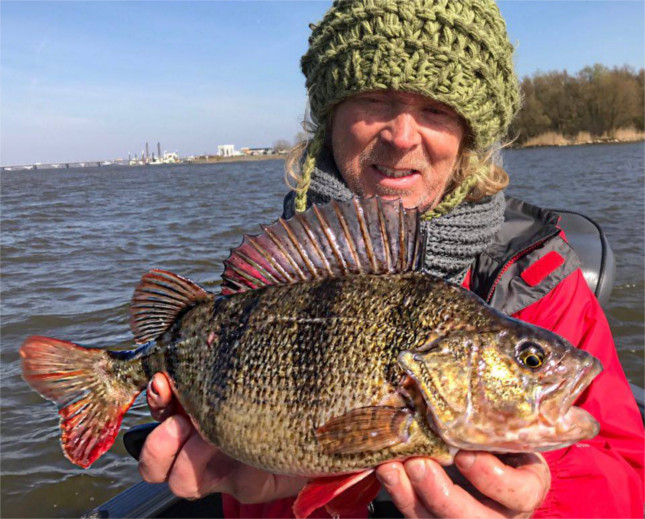 Willem Stolk shows off a fat Dutch Perch, the reason for our visit each year

Rik caught fish after fish, unfortunately nine Zander on the bounce without a sign of the expected Perch, how unlucky can you get!

It’s worth noting that ‘Adge’ catches just as many big Perch out here in the deep water as Willem does in the shallows, mixed in with a fair number of Zander it has to be said, but “variety is the spice of life”.

James and Andy Blazey were taken on a tour of some of Willem’s “special” spots, in the industrial docks that offered some shelter from the high winds; these deep water harbours also offer sanctuary for vast shoals of baitfish, Bream and Roach, that in turn attracted predators. They both caught Pike to mid-doubles and more Zander but no Perch! However Willem did manage to skilfully extract two, the best weighing 5lb 4oz.

Last day, where did these three days go? Rik and I are in Willem’s boat today, and with another rough day ahead we’re taken to the docks in an effort to find some elusive Perch. I’m casting towards a rough stone breakwater, a few fast turns of the reel straightens the line and allows me to “feel” my lure down the drop off,  two slower turns of the handle to just move the lure forward and lift it off bottom, then a pause to let it flutter down, donk, “fish on”. A few very dark almost black male Zander are eager to kill our lures, these aggressive takes keep Rik and I trying our hardest but gradually we realise that, try as we might, the Perch were going to elude us. 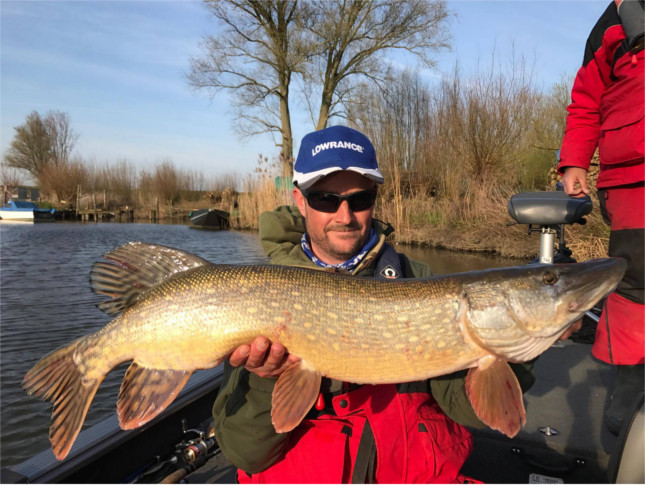 Andy Blazey with a nice mid-double

We stuck at our task all day enjoying seeing new sights and always hoping that the next fish would be the one we were after. The final throw of the dice and Willem takes us into the marina at Willemstad, we’re casting around the boats in the inner harbour where massive shoals of fry are sheltering and wiley predators hunt. We’re almost done when my small Fox Zander Pro shad is stopped in its tracks and my rod tip lunges towards the water; by the sheer weight it’s obvious it’s a Pike. A short battle ensues and my prize slides into the net, not 20lb but certainly an upper double, a nice way to finish.

James and Andy Blazey fished the “dumping ground” with Adge, a mixture of casting and jigging produced more Zander and two, “last gasp” Perch for James, 2lb 8oz and 5lb 8oz, Adge also had a Perch of 4lb. 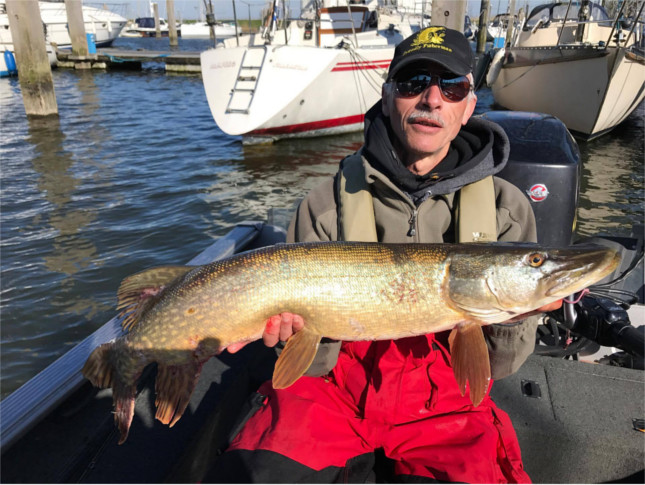 The weather did throw a “spanner in the works”, but you do have to accept that trips in the spring can be very “hit and miss”. On this trip we all caught some nice fish, but our expectations are far higher when we visit Holland than anywhere else, so maybe. However I always enjoy fishing this very special place, where else can I go and know for certain that 6lb Perch, 20lb Zander and 40lb pike are swimming in the very water I’m fishing?

As you may have guessed, we’ve already booked our return visit for next March.

‘The Friendly Fisherman’ is the home of “predator tackle”, owned by Andy Lush, the store is in Tunbridge Wells [TN1 2PS].