This last month I’ve found it very hard to settle on any one venue or method. So five trips through February saw me both lure fishing and fly fishing, on five different waters.

It never ceases to amaze me how similar lure fishing and fly fishing are. Having only just put my Zander gear away I quickly grabbed some fly tackle for a cheeky visit to Chigborough Trout fishery in Maldon Essex CM9 4RE.

The ice had only just thawed out a couple of days before my visit with Gary Collins so we expected the fish to be "tight" to the bottom, but nothing could have been further from the truth.

After 3 hours fishing we'd done a complete circuit of "Home Water" without so much as a sniff of a take. Until I opened my eyes and reacted to what I was seeing, that is. As I said I'd expected the fish would want it "slow & low", but I noticed slight irregular ripples in open water, just in front of the dam. Andy with a typical Chigborough Rainbow

Eventually the penny dropped and I changed tactics, to avoid dragging the bottom with my weighted point fly. I'd been forced to retrieve my flies faster than I really wanted to. A change to an un-weighted Cormorant immediately allowed me to fish shallower and slower. Two fish quickly fell to this change in tactic, followed by another shortly after when I changed to a "Foam Arsed" Cormorant. This final tweak allowed me to fish even slower while maintaining the same depth, cast across the wind and allowed to swing into the downwind bank was the final element that saw several more fish fall to the charms of my Foam Arsed fly. 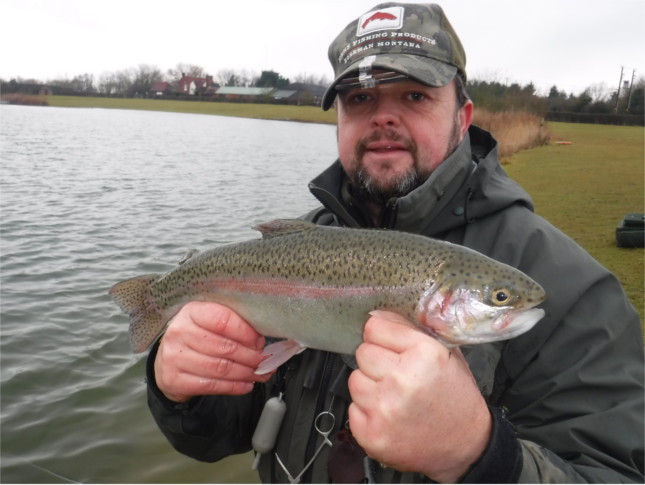 Gary’s team of Buzzers were the downfall of this Rainbow

Having worked out "the method", Gary Collins and I wanted to see if it would work, across the road, on Rook Hall? The answer was an emphatic yes; we had cracked the method, depth and speed. So what looked like being a grueller turned into a respectable day? Gary even caught a few on Buzzers presented under an indicator, so as they say “there’s more than one way of skinning a cat”.

Buoyed by my success at Chigborough I decided to travel up the M11, again, to visit Thornwood Springs in Epping Essex CM16 6LR.  James Gardner was my fishing companion on this occasion, although it wasn’t a cold day it certainly was gloomy with a constant drizzle, we hardly saw proper daylight at any point during the day. The fishery is another clear water venue which explains why we had travelled so far. I like the trout to have a chance of seeing my flies and this gives me the confidence to persist at fishing with small natural imitations.

My set up was unsurprisingly similar to my previous trip, a floating line with an intermediate ‘sink tip’. My leader set up was 12’ of 3x diameter Fluorocarbon [9.5lb] with one dropper 5’ from the point fly. I started off with a Cormorant on the point and a small black Cruncher on the dropper. It was important to fish slowly throughout the retrieve with extra care taken at the end of each retrieve as the flies entered the shallow margins.

The last part of each retrieve, as I was about to lifted off, turned out to be the most effective part. Just as the flies hung motionless in the “strike zone” was when I caught the few fish I managed on this trip. It’s important to watch the fly line and leader as it gently lifts off the surface, takes are rarely hard in fact often all that happens is the leader seems to be under extra tension or at a steeper angle, a sharp lift at this point will hook the offending fish! 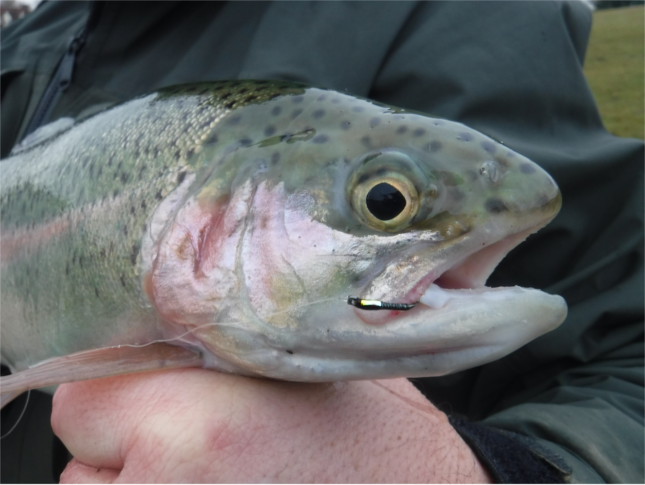 Although I tried my hardest on both lakes, even resorting to buzzers under an indicator on one occasion before changing to an intermediate line and retrieving blobs, the only tactic that brought any response was my was my original set up, so I had to be content and finish with four fish.

James experience similar problems nicking the odd fish here and there, the only pattern we both agreed on was that the margins were the best area to catch a fish. So James spent a lot of time making casts parallel to the bank wherever possible to exploit this potential. He grafted for his four fish, so all in all a hard but satisfying day under uninspiring conditions.

Another windy day saw James and I travel to West Sussex to fish at Wilf’s Hazel Copse Trout Fishery in Rudgwich RH12 3AF. The forecast had threatened rain throughout the day so we weren’t surprised when we arrived to find we had both lakes to ourselves.

I made a slight tactical change in my set up changing my ‘Intermediate-Sink Tip’ to an even slower ‘Hover-Sink Tip’. This would allow me to fish slower and shallower, as on each of my recent trips I had the impression I was fishing too deep, often retrieving faster than I wanted to in an effort to keep my unweighted flies “up in the water”.

I selected the ever reliable Cormorant to fish on the point while I choose a black Diawl Bach with a red holographic rib for my single dropper. My first cast was across the wind, I counted the flies down through the water to about 4 feet before commencing an ultra-slow figure eight retrieve. Just as I took the slack up in my line I felt a little extra resistance, a sharp lift and I was into my first fish, “magic”.

I was now brimming with confidence after such a good start, this was short lived with no more takes in the next half an hour it was time to change something? I tinkered with my set up, off came the Cormorant, replaced by a weighted Bead Headed Buzzer, black with a chartreuse head. The tactic of putting a weighted point fly on creates a steep angle in the leader, this meant my two flies would now be fishing at two different depths, simultaneously. A few casts later, after a much longer count down, I felt another take, this fish was much, much deeper, maybe 8 or 10ft down!

James was on the other side of the lake and was casting at rising fish which had started showing behind a small island, obviously there must be something hatching off the island, as now I could see several fish swirling in the ripple. 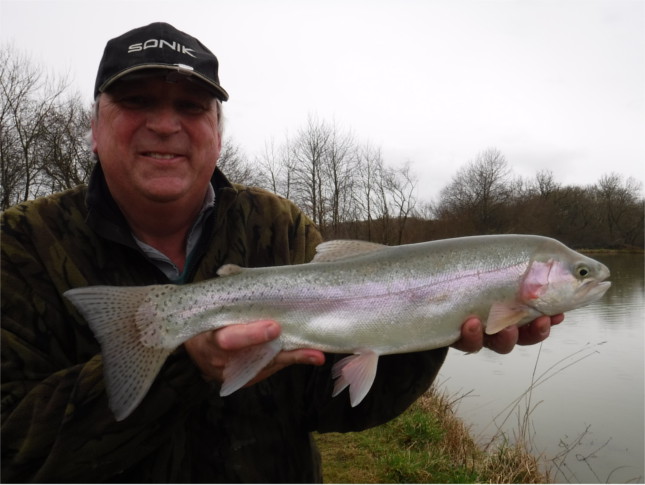 This was the pattern for the rest of the day, by changing flies or depths and even moving to different areas around the lakes we continued to catch the odd fish. What was rather concerning was neither of us really knew what the fish were doing on our visit, nothing seemed to work more than once but you were always in with a chance if you worked hard enough!

The predicted rain never materialised but as the clouds gathered and the sun disappeared the temperature noticeable dropped several degrees which saw us happy to head for home. James had a purple patch at the very end of the day catching 3 fish on the bounce, fishing along the adjacent margin. We worked hard for our fish and James final bust saw him finish on 11 rainbows to my 8, “well done that man”, but I did take the honour of catching the biggest, we’re not competitive in the least? 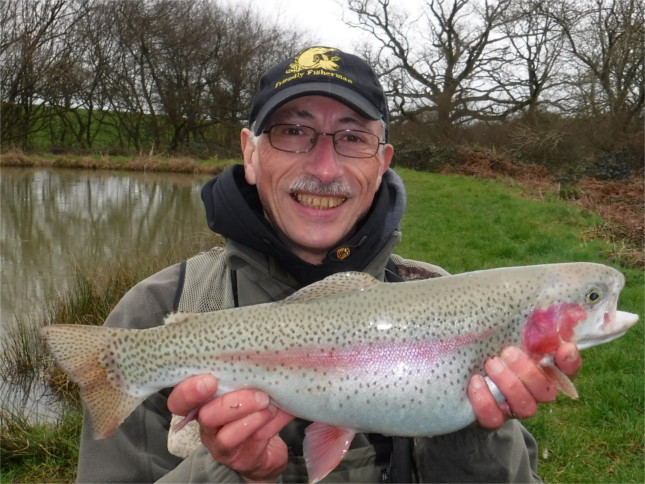 This winter has been kind to me, we never experienced the disgusting storms of the previous winter, in fact I only lost one day’s boat fishing to high winds, and interestingly I actually lost one day to no wind at all but fog! Unfortunately this has all changed recently with my last 4 attempts to get afloat scuppered by gale force winds, hence the amount of trout fishing I’ve been doing on small sheltered waters.

However I did manage a trip with angling guide Rikki Cooper to Weirwood in early February. Neither of us had fished there since last summer so it was always going to be hard to locate fish on our first visit. I wanted to try drifting in open water away from our previous “hot spots”, it would be all too easy to slip into doing the same old things, in the same places, but what would we learn from that?

The day started off calm, mild and sunny, this was pleasant but it didn’t last long, soon the clouds gathered the wind changed and picked up. The mercury plummeted as the rain set in and I could hardy feel my fingers “welcome back”, I could almost hear the perch laughing. I did manage one small pike on an “ice jig”, rather appropriate really. By early afternoon my resolve to fish away from the hot spots had gone, I relented, but try as we might even “the hot spot was cold”! Time to call it a day before we got to like suffering!

The following Sunday saw Mark Bryant and I venture onto Ardingly Reservoir, neither of us had fished here in a long, long time, so our expectations were rather modest. We were both pleasantly surprised the water was so clear, 6ft visibility at least, better than we could have hoped for, even after the level had risen 10ft in just two weeks. We mooched along the Balcombe estate side using the electric engine to slowly cover water, all the while casting a variety of spoons, spinners and soft plastics. I was first in action with a plump but small perch, followed shortly afterwards by a feisty jack pike. Both fell to my ‘Fox Spikey Shad’ that was scratched along the bottom, down the slope into deep water, so far the action had come in 15-20ft. That flurry of action was followed by several hours of, nothing, we tried everything we could think of, hitting our favourite spots of yesteryear but to no avail. We finally ended up by the old boathouse, drifting along the drop off, on the edge of the deep water, I had two more small jacks here, again on the “Spikeys” while Mark bumped a couple of fish on large spinnerbaits. We fished right up to knocking off time with no further action, an enjoyable but rather fruitless day.

As I’m writing this, tomorrows planned boat trip has had to be called off again due to gale force winds, so I’m going lure fishing on a local club lake, something I’ve not done in years. I’ll let you know how I get on next month.