As you motor out of the harbour you’re never quite sure what sort of day you’re going to have. My lure fishing over the last month has been very challenging; the Zander had moved off their previous haunts and were now residing elsewhere. This is where my echo sounder is so important, no longer was it a case of drifting towards one of the many features that lay along the bottom of the reservoir in 50-60’, I now had to start searching. 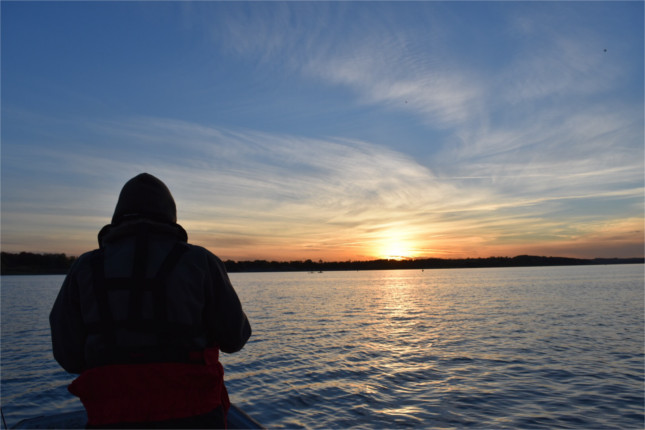 By jigging as I drifted I was able to fish and search at the same time. I started my search in areas adjacent to the previous productive features. By gradually radiated out I widened my search area, finding scattered shoals of baitfish in 80’, in open water, this gave me somewhere to focus on.

Echo sounders are an essential bit of kit when fishing deep water, they give a view of the bottom and the surrounding area, plus they see fish that are located throughout the water column. Interpreting what you’re seeing is a skill that takes time to learn, this watercraft separates the few from the many, and it’s not just a simple matter of buying the biggest screen you can afford. 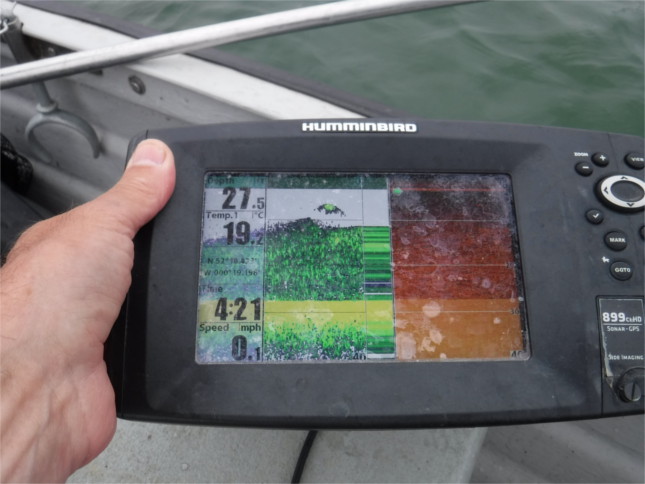 A massive shoal of baitfish with a large predator above!

We searched systematically, using the ‘GPS’ function on the sounder, making one drift after another through the area. We used our ‘trail’ from the previous drift as a guide to motor up before positioning the boat a little across the wind, before starting the next drift. By repeating this process we’re able to explore a huge area, hoping to find the Zander. Once we start catching, establishing a pattern, be it depth, the presence of baitfish or structure is essential if we are to “crack the code” and catch good numbers of Zander again. 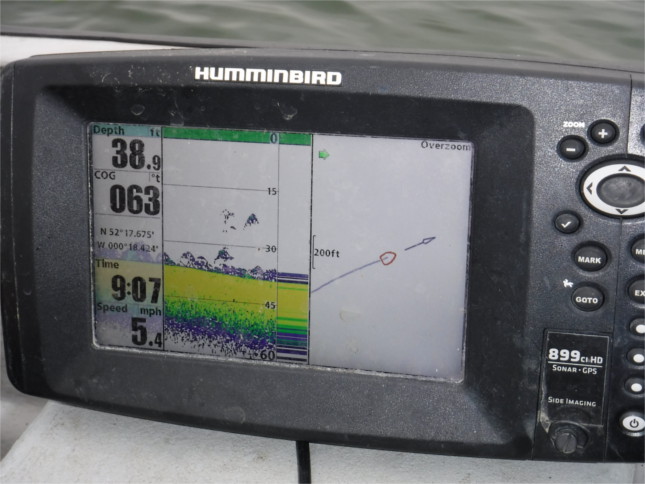 Split screen; Left side shows a scattering of baitfish on the bottom, perfect. Right side you can see our position on the GPS.

The baitfish were in deep water, which happened to be 80’ as I mentioned before, we hoped the Zander were here too. As we drifted through this “open area” we starting catching Zeds, there were no obvious features so it seemed depth rather than structure was the feature. This pattern has continued over the past few visits, sometimes the Zeds are in the middle of nowhere, other times they’re close to any small structure or slight depth variation. 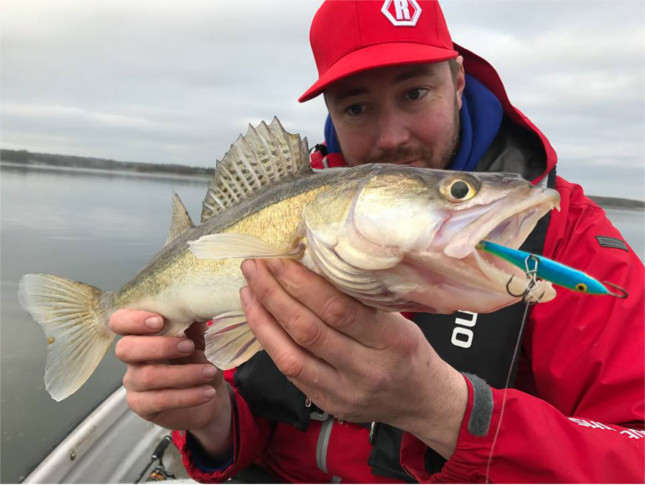 There are some features out in the deeps too, one in particular a pipe, lies in the main basin in 80’ of water. Just behind the pipe is a gully and just behind the gully is a steep shelf leading up to 70’ which gradually leads to shallower water. On a couple of occasions this feature has been “hot”, each time we drifted over it we caught either Perch or Zander sometimes both, productive lures have been a variety of soft plastics but increasingly Rapala Flat Jigs [ice jigs] are more successful.

There’s something about these odd lures that trips the fish up, maybe it’s their erratic action? A short snap-jig of the rod sends the lure sideways; on the pause the lure swings back and circles as it falls until it comes to a tantalising stop. As it hangs “deadstick” under the rod tip be prepared to “get bit” as this is often when a takes occurs! Most fish are hooked on the belly treble which suggests the fish are attacking from directly underneath; occasionally fish are hooked on one of the singles that are positioned on either end. I think these fish are inactive and are caught off guard as the lure swims towards them. They just can’t help themselves, and have to snap at it, it’s worth noting these fish are usually very lightly hooked, either just inside or just outside of the mouth, very odd?

I’m fascinated by these baits at the moment, I’m even casting them on calm days and catching too, maybe they’ll figure in my Perch fishing when I start my campaign on one of our local reservoirs this spring?