A month of mixed fortunes.

It’s been a bit like a curate’s egg, good in parts, a visit with my good mate James Gardner to Grafham reservoir was a “pick and mix” sort of day. We used a variety of soft plastics, spoons and ice jigs, more about them later, to catch a mixture of fish.  We anchored in relatively shallow water, around 20-30ft, near a very popular feature. We systematically cast our lures through the area before re-anchoring every 30 minutes making sure we were thorough. This approach saw us catch Perch, Zander, Pike and an unexpected Roach/bream hybrid of 6lbs! We had a fantastic day with plenty of takes and fish, not what we had expected as we journeyed  up the now familiar M11 earlier that morning. 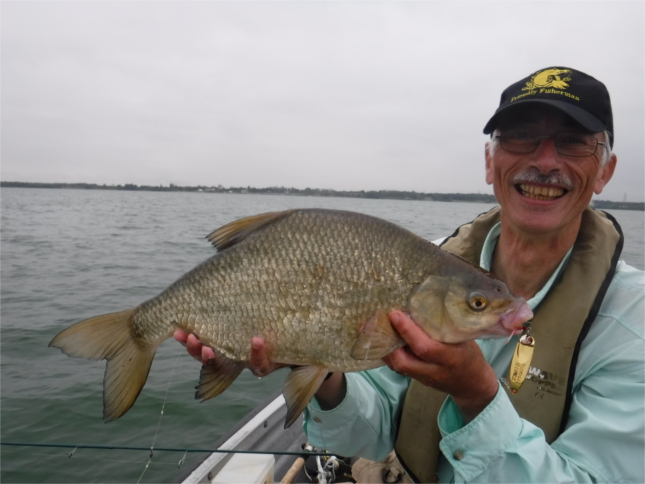 6lb Roach/bream hybrid on a spoon!

The hybrid had taken a spoon as had some of the Zander, however the biggest Zander, of 11lb 8oz, had fallen to my ice jig. James was also catching on a spoon; we’d chosen spoons to cure the problem we’d both been experiencing of short takes on our soft baits. These takes had missed our stinger hooks that were positioned close to the tails of our shads, with a spoon the treble hook is the tail, exactly where the fish were biting, sneaky or what?

My next visit to Grafham a couple of weeks later was so very different, with a solitary take around mid-afternoon producing a new PB Zander of 14lb on my birthday, what a present! My boat partner on this occasion was Mark Bryant, Mark toiled away all day for a perch, a nice Brownie of 6-7lb, and 10 minutes from packing up time his Daiwa Duckfin Shad was intercepted by an 11lb 8oz Zander. 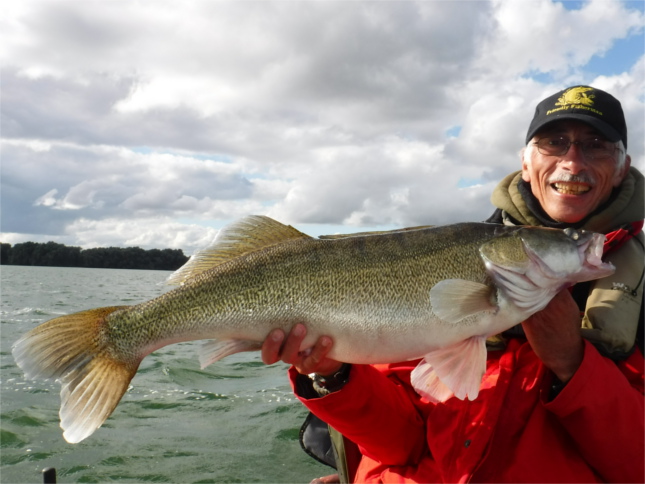 I love lures and lure fishing; I often get side-tracked experimenting with new lures or trying to learn new techniques. One of my recent projects has been working out how to fish ice jigs in “open water” situations. These baits were originally designed for fishing through holes in the ice, obviously I’m not fishing through the ice, although it feels like it sometimes. I’ve been intrigued by their unusual action and have been wondering if they could deceive “pressured” Zander that have become accustomed to our “vertical” jigged soft plastics? To work the lure I’ve found a short upward snap of the rod works best, I then allow the bait to fall quickly on a slack line, this sees it swing and glide back under the rod tip. It’s a mistake not to hover the bait just off bottom for a few seconds as often this is when the take comes. Next let the jig fall to the bottom before giving it another short, sharp, snap, this is another “key” part of the technique as often a fish will have taken the lure while it’s sitting on the bottom! In fact my Grafham double did exactly that.

I’ve said it before and I’ll say it again, “one of my strengths is also one of my weakness’s”, when trying new things I often miss out on catching numbers of “easy fish” as I deviate from what’s working in an attempt to discover new methods. However along the way I’ve discovered some very effective new lures and presentations that would have passed under the radar, this is why I love lure fishing there’s always something new to try or adapt.

I’ve spent a few enjoyable days at Rutland recently, teaching anglers how to catch their first Zander. I had the pleasure of sharing two days afloat with Tim Bickmore from Essex; my mission was to show Tim how to catch Zander while getting an “in depth” understanding of the techniques we use.

Tim was keen to learn how to approach such large waters as Rutland, and successfully fish for the predators that live in these immense waters.

I planned to show Tim some of the Zander “hot spots” around the reservoir over our two days afloat. We first motored into the south arm where I set the boat to drift over one of my favourite spots.  I got Tim ‘vertical jigging’, while I searched the area casting my shad into deep water, 60-70’. We both caught fish fairly quickly which settled us down; we could now relax and enjoy the rest of the day.

As the Zeds were rather small I felt the need to keep moving spots looking for some of the elusive bigger fish.  While catching large numbers of small Zander is FUN, and is good practice, especially when you’re new to Zander fishing, it’s not the way to catch larger fish. Fish shoal in year classes, so their size will not differ by more than a few ounces, if you want to be selective you have to find smaller shoals of older fish. It’s hard to leave productive spots, I know, but this is exactly what you have to do if you want to succeed. By the end of our first day we had covered a large amount of water, finally venturing out into the main basin, an area of extremely deep water that can exceed 100’!

A new day and with renewed enthusiasm we headed for the north arm, I wanted to target another “hot spot”, the ‘pipe’. We bumped into my good friend Rikki Cooper who was out guiding a client, Rikki advised us to stay tight to the pipe as he was catching well along this feature.  He also let us in on his “hot” bait that being the Fox Tiddler Fast, in ‘Salt N Pepper’ colour. With this information we renewed our efforts after a rather slow start, immediately I had several takes but failed to connect with any fish while Tim caught a couple of “dinks”. My attention started to wander so on went an ice jig and bingo I started catching Perch and small Zander [dinks]. Having mastered jigging soft plastics Tim was now keen to see if he could catch on these ice jigs thingies. In fact he enjoyed using them so much he fished with them for the rest of the day and managed to catch several more small Zeds. At the end of our two days it was “mission accomplished”. 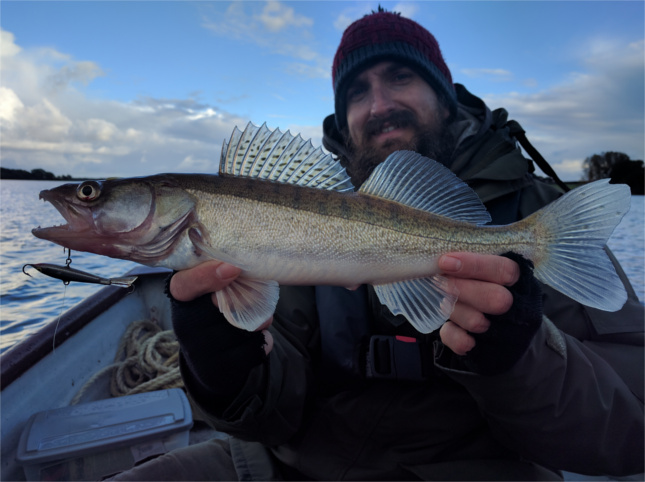 It’s become an in joke with the staff at Rutland that they’re being overrun by southerners.  I keep bringing new anglers to Rutland, from “down souff” for their first Zander experience. The fact is we’ve not got any Zander south of the Thames, so Rutland and Grafham are our destinations if we want to boat fish for Zander. For anyone wanting to catch their first Zed my advice is always the same, go to Rutland first, there’s more fish there and you’ll catch some and learn how to catch more. Grafham is a fantastic water for specimen Zander but its “granite”, rock hard, even if you’re doing everything right, in the right places; it doesn’t guarantee a bite. Grafham is somewhere to go once you’ve mastered your techniques and got a good understanding of Zander behaviour.

Another two day trip to Rutland, this time I was accompanied of Russell Alexander from East Sussex. Russ and I had been planning this trip for some time and to say he was keen to catch his first Zander, on his first visit to Rutland, was an understatement. After my previous visit I decided to go straight to the north arm and target the pipe. I rigged Russ with a ‘Tiddler Fast’ in Salt N Pepper and within the first hour he’d caught his first Zed, so he could relax. Later during the morning Russ caught a couple of better fish, well away from the pipe, which gave us something to think about. By the end of our first day Russ had caught 9 Zeds up to 5lb 8oz, result!

Overnight the wind changed and although we were able to fish the pipe effectively the fish were not biting or maybe they weren’t there? Eventually we moved looking for some feeding fish, we drifted very close to the main ‘tower’, in fact I was just about to move the boat when my lure was hit by what was a much better fish. As I manoeuvred the boat and played the fish I got very excited, at 6lb 4oz it was a much larger than we’d been catching, but not as big as I’d thought it was going to be. It’s good to know I can still get excited about catching Zander, whatever their size!

The day passed all too quickly ending with us in the south arm hoping to bolster our meagre total. Russ caught another 9 Zeds equalling his first day total but on this much tougher day he’d excelled. I scratched around all day trying different lures and different techniques in an effort to work out where and how to catch more or bigger fish, but had to be satisfied with my 11 Zeds, until the next time that is.