The four amigos go to Spain

James Gardner, Mark Bryant, Gary Collins and I travelled to the Extremadura region of Spain for what’s become our annual trip. James and I have been visiting this region for the last 12 years and with so many waters still unseen let alone fished, it’s hard to see us going anywhere else soon. Our aim was to fish for two species using our two favourite methods, lure fishing and fly fishing; fortunately Mark and Gary are hooked on these methods too.

Dry fly fishing for Spanish Barbel is akin to “upside down” Bonefishing, an experience that has to be experienced at least once. Stalking the clear waters of an enormous reservoir, casting dry flies, with the sun beating down on your back is an experience to be savoured.

We target these sleek powerful torpedo shaped Barbel as they cruise the margins, casting our Bob’s beetles, thanks Bob Holland, into their field of vision. Get it right and “bingo”, all hell lets loose as your fish races to the horizon, your reel screams in protest as yards of fly line and backing shoot through the rod rings. To say it’s exciting is an understatement; it makes up for all the “hard yards” of bank walking it’s taken to get you into this position. All is not perfect, the ever present algae can often make spotting fish impossible, but we’ve learnt to accept this and rather than struggle we just move to another bank, preferably upwind, where the fish will be visible. 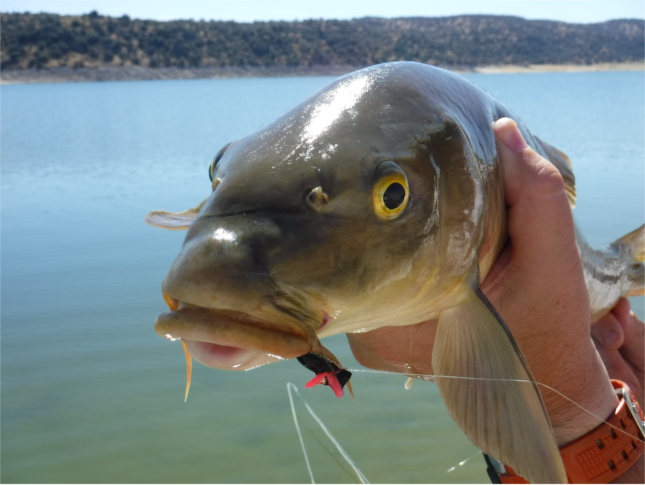 It’s a joy to have such freedom, no rules, no local expert telling you you’re doing it all wrong. We just fish in a way we think might work, but most of all we make sure we have a lot of FUN!

As if Barbel fishing wasn’t enough both the reservoirs we visit have a healthy population of Zander, and boy do we love lure fishing for them. Unlike their UK cousins these Spanish Zeds are much more active, so we’re able to fish in shallower water using a variety of lures and methods.

Trolling crankbaits is a method we don’t get to practice in the UK for Zander as it’s against fishery rules, but on this occasion it was a useful tactic. Trolling covers so much water helping us search for fish holding features. At speeds of 3-4mph our Rapala’s were able to swim through miles of water until their intercepted by, a Catfish, that wasn’t in the script! James caught a small Cat as well as a small Zander which both took a liking to his Rapala DT10. 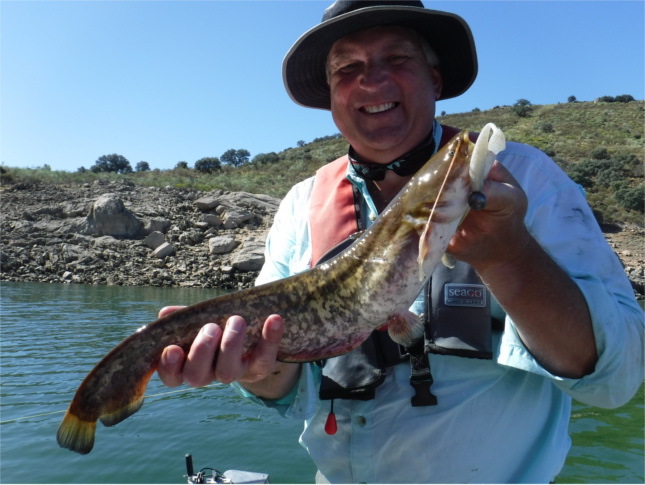 On our first day we did find an very interesting spot, a steep drop off, adjacent to the ruins of a farm and its outbuildings. We’d previously christened this feature “Atlantis”, as the buildings are often submerged in the reservoir. Our echo sounder showed a lot of structure on the bottom and what looked like fish too. We positioned our boat in a depth of 40’, casting our soft plastic shads into the shallower water. It’s important when fishing such snaggy areas, not to cast too far, if you do you run the risk of dragging your lure into the snags, Gary. No, short accurate casts see your lure tripping over the bottom, 2 or 3 fast turns, followed by a pause, sees your shad swim up off the bottom before fluttering to the bottom. Almost all the takes come “on the drop” although these fish were so “up for it” that we did get takes on a straight retrieve too, very unusual. The fishing was so productive that James and I got a bit blasé, we challenged each other to catch on our least favourite lures in the worst colours. We’d packed a lot of lures we were prepared to leave attached to snags, knowing how treacherous the terrain was. So we rummaged around in our tackle , tossing the worst baits we could find, and surprisingly they all caught, in fact one gold glitter thing I challenged James with became the “hottest bait” for the day! 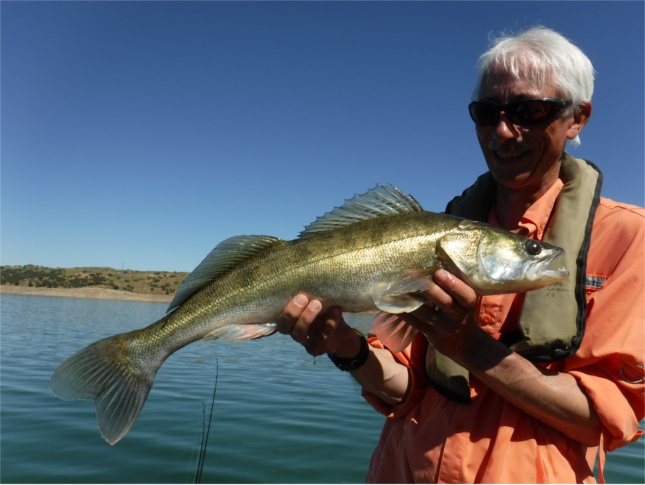 On one retrieve, I missed a take, nothing odd in that, as the lure descends I miss another take, dam, as my lure falls to the bottom for a third time, I noticed my braid is slack indicating something has intercepted my lure on the way down. I quickly wind down and set the hook, “fish on”, what happened next astonished us as my reel goes into meltdown. My St Croix rod takes on its “battle curve” and the boat starts to get towed by what is obviously a large Catfish. 20 minutes into the fight and the runs are getting shorter, I think I’m gaining control; I’m not sure who’s tiring quickest? We’re still too close to a lot of snags for comfort so James slowly motors the boat into deeper water, away from the structure. 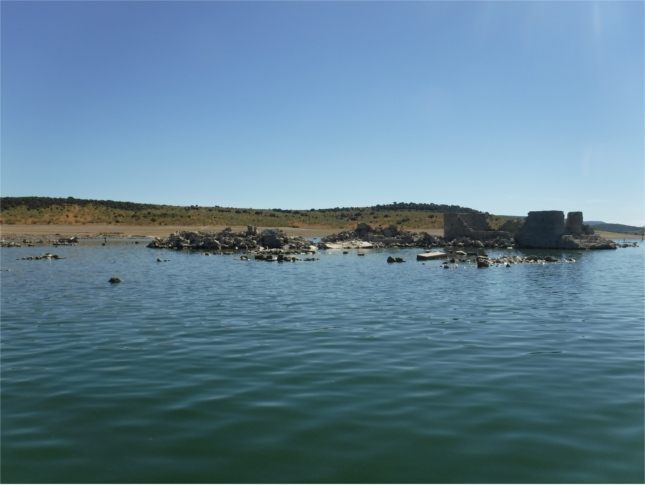 Slowly the fish is brought to mid-water before it dives to the bottom and drags 30 precious yards of line off a very tight drag. My arm is aching, but I think I’m winning? Wind, lift, wind, lift, gradually my prize appears out of the green gloom of the algae stained water, first a head then a very long body, OMG. 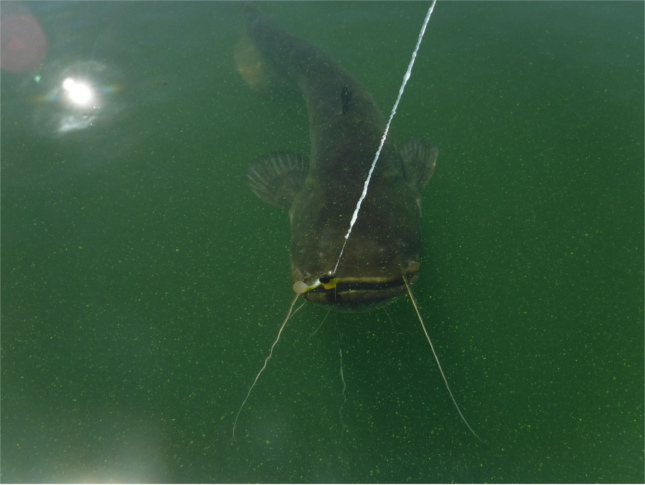 "Out of the gloom"

We now have a problem, no landing net or handling gloves; James cuffs it through the gills and drags it into the boat, what a star. My delicate rod, designed to cast 7g, has been incredible, I was so very lucky to land my prize, how it avoided all those snags we’ll never know. Sadly later in the week James hooked another large Catfish, in the same spot, but this time his braid is cut off on a snag shortly after hooking it, not fair. 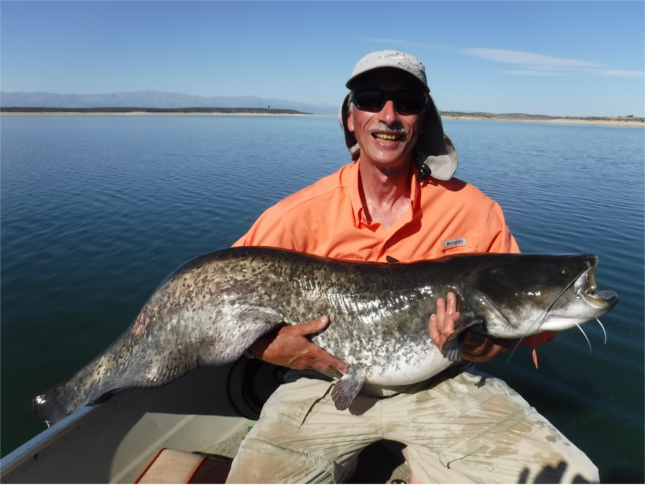 Our second venue was a return to an old haunt where we first encountered Spanish Barbel. Zander have entered the reservoir in the last couple of years so we were keen to see what impact they were having?

To our surprise there was a two day ‘Bass tournament’ taking place with 130 boats participating! Our first day coincided with the final day of the tournament. This normally tranquil water was being churned to foam as boats zoomed from one spot to another at 90 miles an hour, a slight exaggeration but they were skimming the surface, they were that fast, this commotion completely switched the fish off!

Trolling was our approach; again as we’d not been here for 4 years, we searched all our previous productive areas with little success. Shell shocked, it quickly became apparent that the boat traffic was affecting the fishing, we just had to “tough it out”. I suffered my first blank in 17 years of fishing in Spain, Gary was “top rod” catching a couple of Pike, yes they have them in Spain, plus a Bass, a Zander and a Barbel, “full house”. James and Mark had a couple of small Zander and a Pike so I was the only “blanker”. 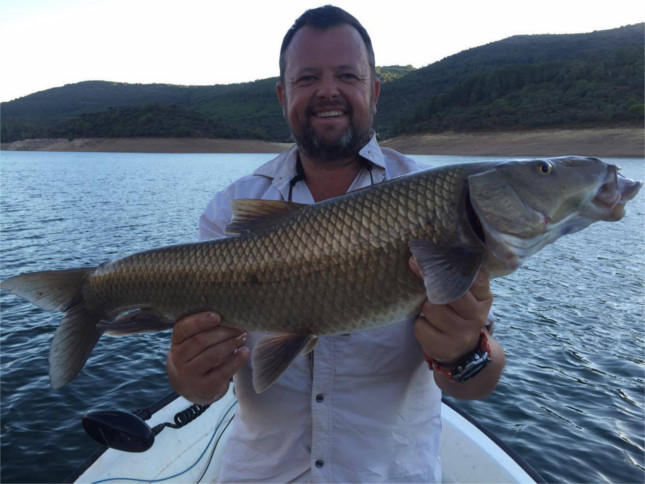 Day two was a completely different affair, with little boat traffic, the fish started to show themselves again and the guys had a brilliant day catching on a variety of methods. 4 double figure Comizo Barbel, 2 to Mark on trolled crankbaits at 4mph, 2 to James, 1 on a crankbait and the other on a livebait. They also had plenty of back up fish, the reason I’m a bit vague is I wasn’t there but more of that later. 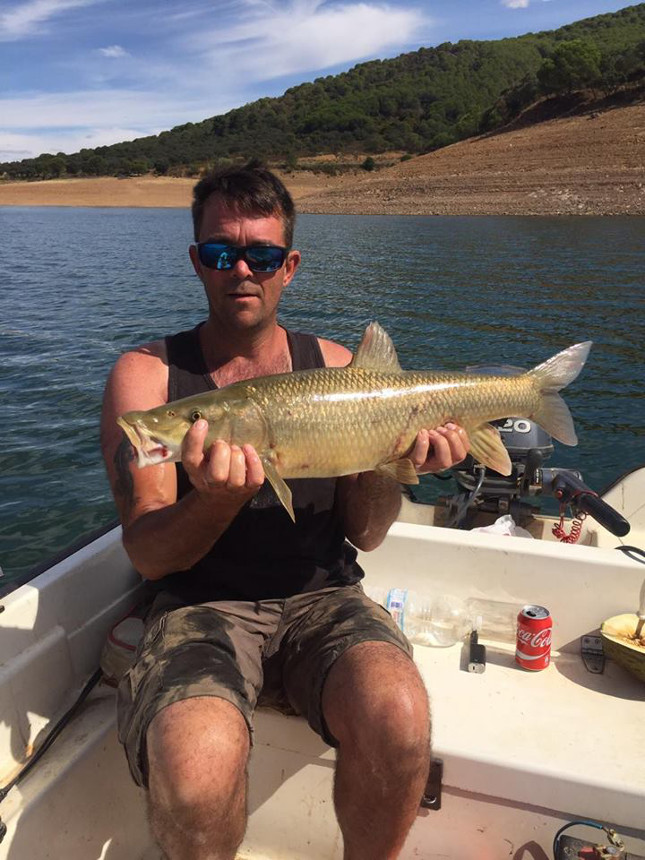 Day 3 and we’re all fishing together again, James and I motor to yesterdays “hot spot” but the fish are reluctant to feed so we gradually moved away trolling our crankbaits searching every nook and cranny. Late afternoon, as the light starts to fade, and we’re back where we started just in time for the Barbel to start feeding. James catches another double figure Comizo and 2 other big fish, all caught fly fishing on a sinking line with a Minkie, a fry pattern! Mark and Gary continued trolling, at speed, and they were rewarded with a number of Comizo’s and Gary got his longed for double figure Comizo, well done mate. I had another grueller with one small Zander. 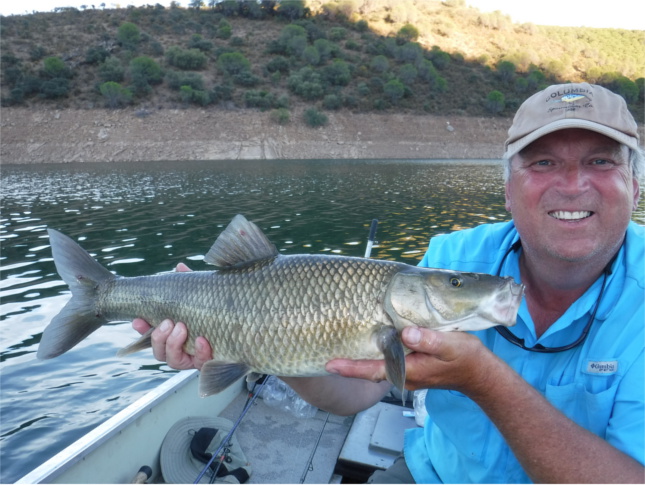 James Barbel taken on a Minkie

On day 2 I drove to another of the many reservoirs in Extremadura, a couple of hours away, to “scope out” a potential new location for us to fish next year?

My first impression was how open the surrounding landscape was in comparison to the other reservoirs I’ve fished in Spain. Rolling treeless hills as far as the eye could see with vast expanses of water dotted with islands and bays galore, there were literally thousands of features. Bank access was going to be a problem so I spent half my day driving down dusty tracks as I searched for access to fishable banks, all the time hoping to find a boat ramp, which I did, boat access will open up this amazing water. 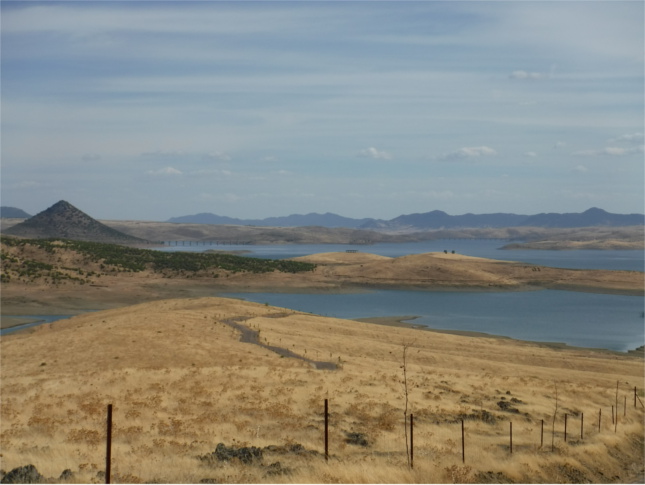 New water for next year?

I did manage to wet a line while exploring, the first Barbel I spotted immediately engulfed my Bob’s beetle with such enthusiasm that I was left stunned. The next couple also displayed the same appetite; one almost did a back flip as it rose to intercept my fly, as it drifted overhead! 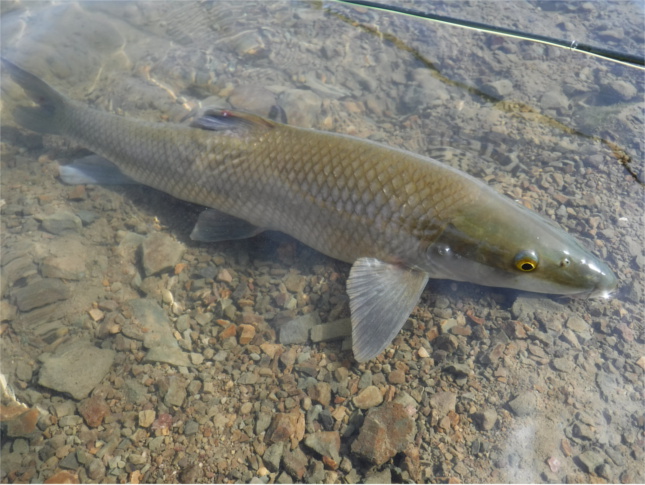 On our travels my friends and I have given up trying to catch Carp on our flies as they rarely show any interest, giving us the impression they’re unaware of surface food. So you can imagine my surprise when the very first Carp I covered rose immediately and took my beetle pattern, wow! Later in the afternoon I happened on a spectacle I’d not observed before where a pod of Carp were so tightly bunched together that they flattened the ripple, at first I thought it was a rock but no it was fish! The Carp were feeding on something just sub-surface as I could clearly see their mouths opening and closing but I couldn’t make out what it was? Anyhow an accurate cast amongst them immediately saw a pair of rubbery lips appear and my fly disappear, “game on”. A whole fly line and 40-50yards of backing instantly shoots out across the water, amazing. I stalked several pods of Carp in one huge bay, at times the fish were so tightly packed that their tails were poking through the surface, very odd behaviour.

All good things come to an end, where did those 10 days go? The planning for next year’s trip is already under way, plan to succeed, the countdown has begun.