THE TIMES THEY ARE A CHANGING

Finally the wind of change is upon us, autumn, is in the air and my predator season has stepped up a notch.

The WPC England qualifier at Grafham reservoir was a great success, hats off to the organiser Gary Palmer and its many sponsors who were so generous. The weather tried to be a spoil the weekend but the enthusiastic participants wouldn’t let the wind and rain put a damper on this event. 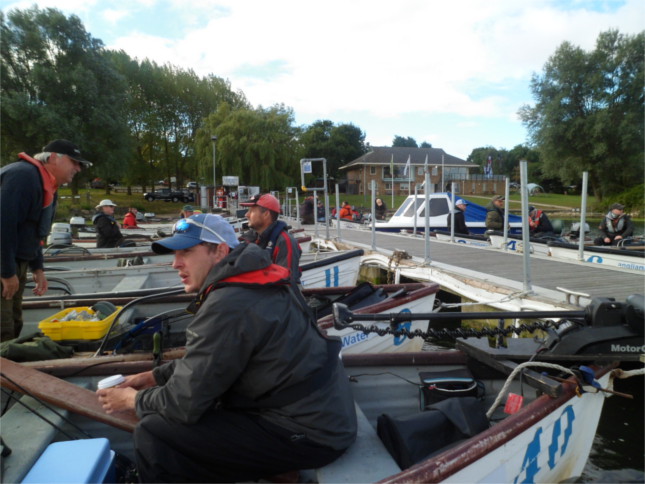 Getting ship shape before the ’WPC’ at Grafham Water

The event was a pairs match, to win you had to catch 3 Perch, 3 Zander and 1 Pike, the longest combined length would be the winner. This saw anglers adapting their tactics to catch each species. The eventual winners, James Dobie and Mike Edgar got their tactics right and ran out worthy winners. As well as receiving piles of prizes the pair will now go to Holland next June for an expenses paid 5 day fishing trip to compete in the World Predator Classic final, well done guys.

My boat partner had a handicap, me, Ian Crook caught all the Perch we needed while I tried to catch Zander or Pike. The fact was I couldn’t catch either and when I tried to catch Perch it took me most of the day to put a fish in the boat! Ironically once I’d broken my duck, it was like buses with several Perch coming along at once, in fact I even caught 2 fish on the same lure.

I managed another trip Bass fishing curtesy of my good friend Mark Bryant. We fished several inshore wrecks in an effort to locate feeding fish. It was a neap tide which means gentle flow allowing us to use light spinning gear to present our 80g jigs. One of the attractions of sea fishing is you never know exactly what you’re going to catch next and you get to share some unusual sights. As we drifted our first wreck we became aware of being watched, our observer turned out to be a baby seal, the first either of us had ever seen. We caught several nice Bass during the morning up to 8lbs they fell to a mixture of mini pirks and the unique Fiiish Black Minnows. All our fish were returned, the Bass regulations allow us to each retain 1 fish over 42cm, but as is our habit we returned every one! Interestingly I also caught Mackerel, Pouting, Pollack and Red Gurnard using the same tactics before the tide changed and the action ceased, oh well that’s sea fishing. 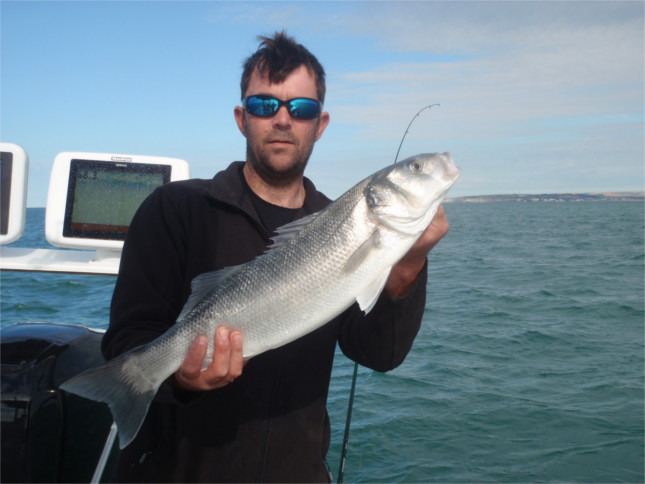 Mark Bryant with a super Bass

September at last, I’m where I’ve wanted to be for some time. Rutland reservoir is a fabulous water; although large it retains a degree of intimacy with it’s North and South arms, numerous bays, and features galore; I never tire of fishing there. So when my pal Rikki Cooper suddenly had a day spare, I didn’t need asking twice if I wanted to go to Rutland. Rikki had fished the “Zandermaster” competition, as defending champion, earlier in the week, finishing a close second. We were confident not much would have changed in the intervening few days, how wrong could we be! Most of Rikki’s fish had come from depths around 60ft so obviously we fished similar depths on this occasion while exploring other areas. With no action on our first few drifts saw us moving frequently searching known features, “marks”, which we have on our GPS map of the water.

By mid-afternoon we had amassed a few small Zander but I was unsettled by the lack of quality fish, so we kept on the move visiting different parts of the reservoir in an attempt to establish a pattern that would help us catch more fish. One very small, “special”, feature produced a few bigger fish in two short drifts before the fish developed lock jaw. The day was now slipping away from us and with the long journey home looming we were starting to think about packing up. I suggested we return to where we started the day but this time in shallower water, in fact I stopped the boat in 25ft and began casting towards the shore into 10-15ft. Four fish in four casts “this is more like it”, Rikki was also enjoying similar success. In a hectic last 45 minutes we each caught 8 fish giving us a more respectable total of 40 Zander for the day, not too shabby after all. 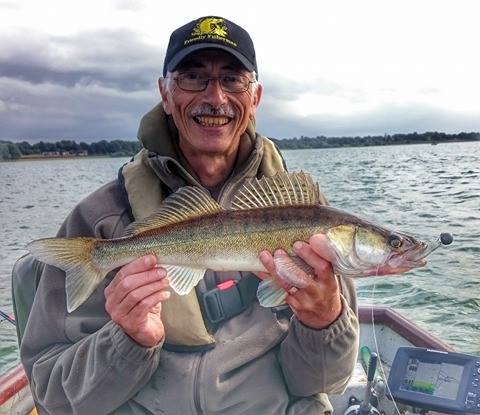 As I’m writing this there’s less than a week to go before my “amigos”, James Gardner, Mark Bryant and Gary Collins are off on our travels to Extremadura in rural Spain. We’ll be fly fishing and lure fishing two huge reservoirs in search of Comizo Barbel, Zander, Pike and Black Bass [largemouth]. So be prepared for a “blow by blow” account of our adventures in next months ‘Freshwater Informer’.