I can think of few hobbies that are so adversely affected by the weather. It’s not only our comfort but the behaviour of the fish we seek, the weather can throw “a spanner in the works” when it comes to understanding what’s going on beneath the water. From this you can surmise that my last month has been one of confusion. I’ve continued on my quest targeting the jumbo perch at Wierwood while alternating visits to Grafham Water in Cambridgeshire, fly fishing for Zander.

Early June saw The Friendly Fisherman host the now annual Lure Anglers Society’s lure event at Bewl Water. This was a fun day with lots of banter amongst the sparse turn out, never the less we had an enjoyable day.

I had expected the predators, Perch and Pike, to be fry feeding in the margins but after two hours of fruitlessly fishing the “Ferry Point” and the jetty itself my boat partner Roy Goddard and I were fishless. A change of tactics was required and so we headed to “Dunsters”, a large deep bay off “Bewl Straight”. Duster’s offers a variety of fish holding features, we now needed to search for fish, so we started to fish on the drift. Our first drift started out over the old stream bed in Bewl Straight working up the shelf into the bay itself. I set up our highly effective ‘hybrid rig’ using a small Savage Gear ‘Dying Minnow’ on the Dropshot hook but this time using a small Kuusamo ‘Rasanen’ spoon instead of the usual shad, as my weight on the end of the line.

I cast upwind behind the boat, feathering the line as my rig fell through the water until it reached the bottom. I then engaged the reel, taking up the slack line, then making an upward sweep of the rod I quickly made two turns of the reel handle to regain contact with my lures. The tension on the line held my ‘hybrid rig’ up off the bottom as the boat continued its drift; slowly I lowered my rod allowing my spoon to flutter down through the water column in a most enticing manner. Well the Perch seemed to agree thankfully as I started getting takes.

Now I love catching fish, lots of them, but I also like my boat partner to share in the action too, so having got the method sorted I suggested to Roy that he should change his tactics and set up the a ‘hybrid rig’too.

I was experiencing two entirely different types of bites, the first was a series of nips and rattles that I was sure were small fish attempting to take my Dropshot lure. I’m convinced the tension on the line between the rod tip and weight was preventing the Dropshot lure from being swallowed. As soon as my next rattly bite came I dropped the rod tip back towards the water, creating some slack line, this allowed the fish to get a proper hold of the Dying Minnow, after a couple of seconds I lifted into the first of several small Perch. The other takes, when they came, were sharp solid affairs leaving me in no doubt and all resulted in the larger Perch which fell to the ‘Rasanen’ spoon.

As the day progressed we explored other parts of the reservoir but on this day it was the drifts through 20 – 30ft that were productive. Nowhere produced more takes than our original drift in Duster’s so that’s where we spent the rest of our day.

As the day came to an end we discovered we had been the only ones to really catch consistently with the best Perch, best Pike and the biggest bag of fish all coming to our boat, “full house”. I’d been spoilt recently and totally misjudged the size of perch we’d been catching, with my best scaling 1lb 4oz and Roy’s best 1lb 2oz plus a small Pike of 4lb 8oz to Roy being the only Pike caught in the competition. 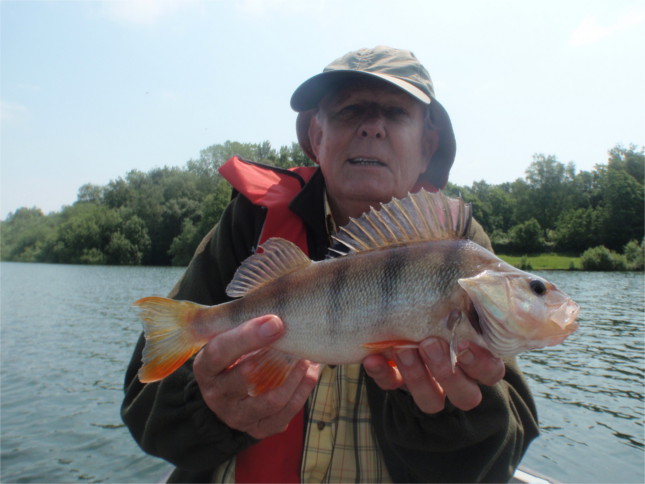 A return to Wierwood in the company of James Gardner was long overdue. After several downpours the reservoir had coloured up and I wondered what effect this would have? I showed James how Rikki Cooper and I had been fishing and proceeded to slow troll upwind, on the electric engine, and then drift downwind over our productive features. Although I’d described how we’d been dragging our Crayfish lures along the bottom to James he hadn’t quite believed that was exactly what we were doing. No lifts or jigs, just dragging, James found this difficult to do at first until a solid take and a 2lb plus Perch confirmed he was doing it right! Confidence is essential in all forms of fishing, especially when it’s a departure from your normal tactics. I’ve been spoilt as I said earlier and I felt we’d had a poor day but on reflection 10 Perch over 40cm, “oh so very continental”, and all over 2lb with the best scaling 2lb 8oz isn’t that bad a day! 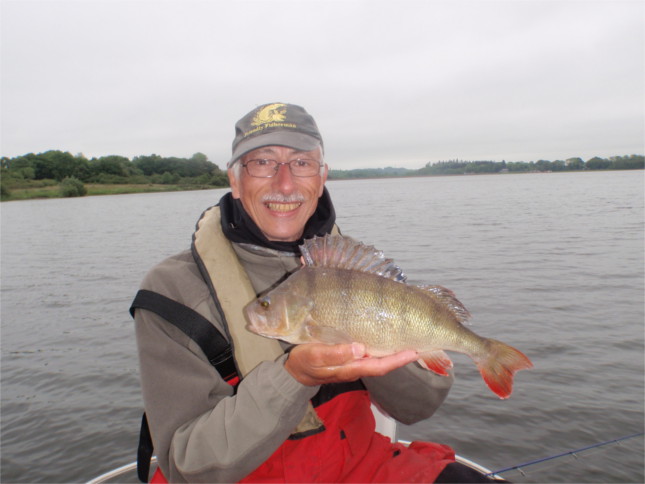 I can’t explain why Zander are so all consuming but James, Rikki and I are all pining for September when the Predator season re-opens on Anglian Water’s reservoirs. To ease the pain James and I decided to try fly fishing for Zander on Grafham Water. We’d been told that during the summer months the Zander bite harder, fight harder and are often seen following flies up to the boat. We must be mad but James and I are always up for a challenge and so we’ve started traveling up the M11 again.

Our first trip was a rather breezy affair which saw us exploring an area near the aeration tower on the north shore. We started our drifts in 30ft and stopped at 15ft. Our outfits were powerful 9ft #10 rods matched with Di7 fast sinking lines. We cast across the wind, counting our lines down to the required depth before strip retrieving until the line came up behind the boat. I’d marked my fly line at 10ft intervals so I could hold my fly at the desired depth, before stripping in and recasting. After a couple of hours James set the hook into his first Zander, not big but an important first, confidence rose as he added two better fish later in the day. I on the other hand had a complete blank, not even a take, but I was sure I knew why, so I wasn’t as dejected as you’d expect. My fast sinking line had a lower density running line which lifted my fly up off the bottom as it neared the boat so a large part of my retrieve was above the fish out of the “kill zone”.

Trip number two and I’m now equipped with a new Airflo Ridge Di7, with the new line loaded I’m confident I have the tools to do the business. It’s another blustery day but that’s how Zander like it but after several hours we’ve not had a take! Then almost in unison we both hook small Zander, about 1lb apiece. Now we’re “in the game” all we need to do is find some bigger fish. Each new drift saw us covering different water as we continued our searching process. By late afternoon the weather turns nasty seeing our drift speed picking up to the extent that we’re now struggling to get our flies down to the bottom in the target depths. James suggests we return to a more sheltered area where there’s a gentler slope from deep water onto a point.

What happens next changes my day, first drift over “the pipe”, a major feature on this water, I have a solid take that bends my rod into a fighting curve but immediately comes off! I’m using a slim tube fly, I check the small treble hook which is razor sharp so I’m confused to why the fish came off but James thinks it’s too small. Reluctantly I replace the hook with a larger size 6, a couple of drifts later  I’m retrieving my line, as it comes “around the corner” and lifts behind the boat, my 40ft line marker is now visible indicating my fly is just off bottom in 30ft, I glance at the echo sounders screen and notice some large fish below the boat, what to do? If I cast again I’m uncertain my fly will be in the right place at the right time, so I pay line out instead, this increases the depth I’m fishing and I just let the boat drag my fly through the water, wham! “Fish on” and this feels like a proper one, the wind is now pushing us at speed, bending my rod double as the boat tows the fish. I gingerly played my prize praying it would not come off, the fish made several alarming lunges before it’s finally “in the net”. At about 6 1/2lb it’s not as big as it felt but I’m still very happy. 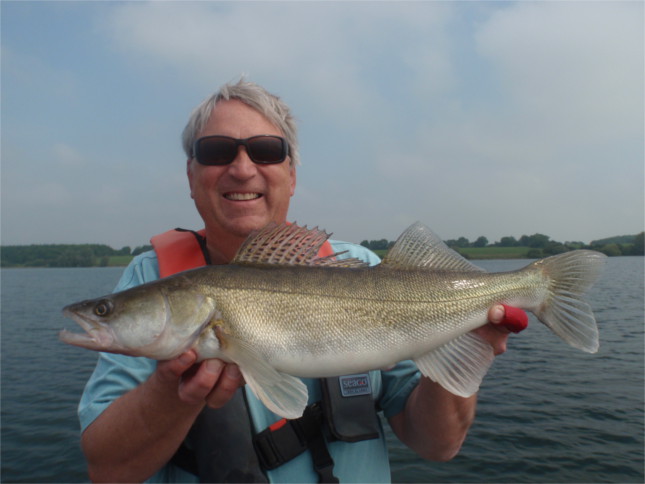 The wind is now making it even harder to fish the deep water so we drop the anchor, casting downwind is so much easier and with no drag on the line to contend with I have to adjust my “count down” to see my fly staying just off the bottom throughout the retrieve. First cast and I receive a savage take, the fish makes a few lunges but everything’s under control, it doesn’t feel that big but as it nears the surface I can see it’s a long fish, and yes it’s a Zander. Safely in the net I’m overjoyed, we both look at each other and can’t decide if it’s a double or not? So we break out the sling to find out for sure, 9lb 14oz “so close but no cigar”, not a double but I’m elated all the same, mission almost accomplished. 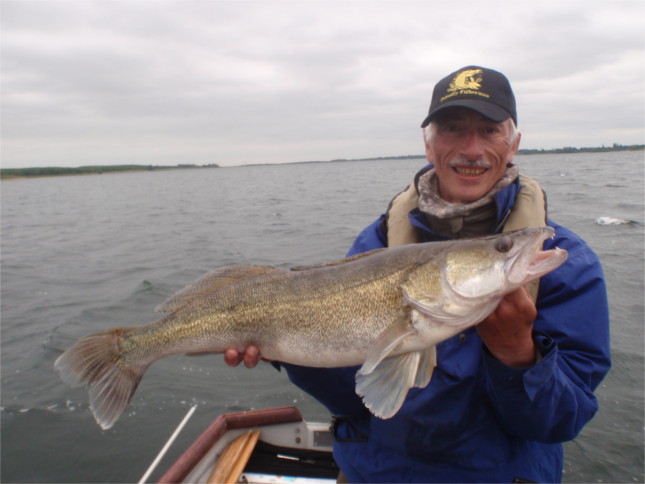 Andy’s well pleased with this 9lb 14oz Zander, on the fly