It’s been a month of contrasts, one moment its spring with the birds and bees pike and carp all thinking of breeding, the next it’s back to winter. Cold Northerly winds have chilled me enough to frantically go searching for my thermals! A Canadian fishing guide once told me “it’s two coats colder out on the water”. 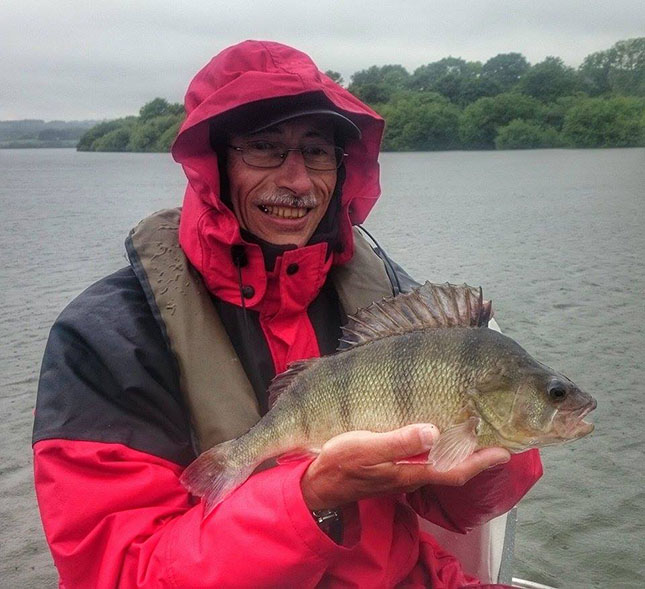 Andy battles the weather to catch this super 2lb Perch

The perch this month have been difficult to understand; now they have spawned. Where were they now and at what depth? Would they be active after their exertions? With the water temps finally creeping up, surely they would start chasing our lures in a more aggressive manner.

My next two visits to Wierwood  I was “Billy no mates”, Rikki Cooper and James Gardner were both unavailable, either fishing for other species or visiting France, Rikki for Cats while James went Carp fishing.

On my first solo day I targeted the Dam wall, an area I’d fancied but had not devoted much time to. It was difficult to remain in a constant depth as the wall slopes quickly into deep water. I spotted a shoal of fish holding near a pipe and immediately caught a good perch of 2lb 12oz. Once I was ready to fish again I struggled to locate the shoal so it was back to a mixture of slow trolling and drifting, in an effort to remain in 15ft of water. A few small perch and a couple of jack pike were my reward for persistence but I was fishing such a small area that I felt it was time to move on.

I gradually worked my way along the drop off venturing further up the reservoir. I zig-zaged along the shelf in an effort to establish a new taking depth. This manoeuvre saw me going into shallow water, just in case fish were active and hunting here, then turning out across the drop off into deeper water, around 20ft, before heading back across the shelf again. This tactic was employed around features that had been productive in the previously weeks.

I caught a few small perch which only confirmed that the big fish were not here. I was unable to target some of our better spots, especially around the ‘humps’, as now the carp anglers were out in force. With their lines in the area and not wanting to disturb their fishing, I moved on further up the reservoir.

With even more carp anglers further up the bank I opted to fish the opposite side, an area Rikki and I had hardy touched, mainly because we were catching fish where we were. So today was turning into a bit of an exploratory tour. A few more small perch and one of 1lb 8oz saw me leaving the water none the wiser as to where to fish next time.

On this trip I’d brought along an electric outboard engine in an effort to hold the boat on any spots I thought worth further investigation. The petrol engine was too powerful to make small adjustments in position so now I was prepared to do battle. The wind was pushing down the length of the reservoir which was going to make fishing the Dam wall very difficult.

Starting around the pipe and straight away I was catching “dinks”, small perch, but it was proving difficult to stay in the best depth as, as soon as I took my hand off the engine the wind pushed the boat up the steep shelf into shallow water and I had to take care not to be blown onto the wall! As I was now moving faster than usual I started catching small pike, 3lb - 6lb that were now active, having woken from their winter slumber. In fact I went through a period where every take produced another jack pike.

I decided to move up the reservoir seeking some shelter from the strengthening wind. I settled around a gully that leads out from a small bay into the main reservoir. The 15ft shelf drops into 20ft here and makes a good place for fish to hole up when they’re not hunting. A few more “dinks” and even more jacks saw me changing tactics in an effort to avoid the pike but nothing I tried worked, but I was having FUN. 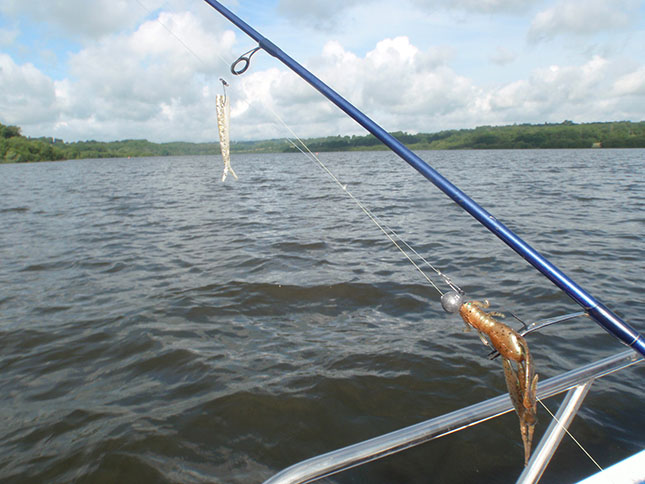 The ’hybrid rig’ with Dying Minnow on Dropshot hook & Crayfish on Jig hook. 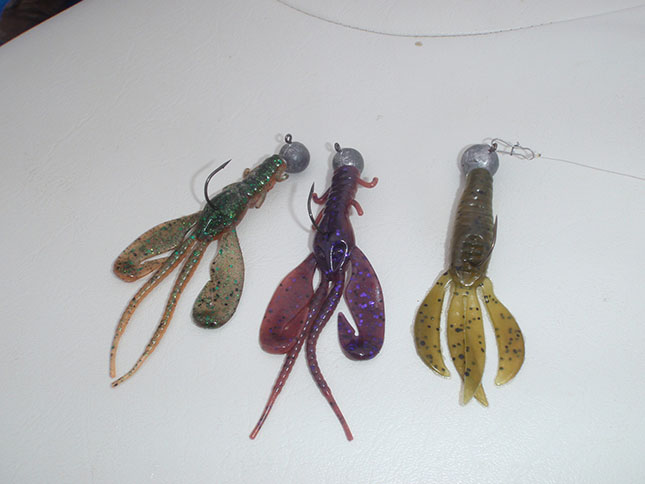 I received a lot of nips that just trembled the rod tip; I was sure these were perch biting the Honeyworm. By dropping my rod tip back created enough slack line to allow the fish to get my bait/lure into their mouths. As I lifted I connected with small perch, on the Dropshot bait, as I’d predicted. I now employ this tactic whenever bites get finicky on this rig.

My day ended with only one proper perch of 2lb 8oz and 12 pike to 13lbs. I don’t normally weigh pike of this size but it fought so hard that I got over excited and thought it was a lot bigger! Dow, the day I stop getting excited about going lure fishing will be a sad day indeed.

The return of the dynamic duo.

Finally Rikki and I managed to get back on the water together, two heads are always better than one. We needed to find fish and possibly a new tactic to catch them, since spawning my results had been patchy.

Our search began, again focused around what had become the magic depth of 15ft, but we were prepared to venture into both shallower and deeper water as we tried to crack the puzzle. The Dam wall was our starting point and I quickly put a 2lb 12oz Perch into the boat, it was good to be back and our confident was high. The problem now was the pike; they were so active that we dared not move our lures too much in case it attracted their attention!

When the wind was favourable we drifted, using his bow mounted engine enabled Rikki to steer us through our best spots. Occasionally he slowly motored us along the shelf so we stayed in the kill zone but as we worked our way up the reservoir, away from the Dam, we seemed to lose contact with the fish, both perch and pike!

We eventually decided to target the gully area, the wind had now dropped, and our slow trolling method while lifting and lowering our lures wasn’t getting the desired results, what next? Out of desperation I decided to start casting, 4 casts, 4 takes, 3 fish, we were back in the game!

Interestingly the fish were still where they had always been, just more thinly spread. Casting allowed us to cover far more water in the general area of our hot spots.

It was very important to get the retrieve just right, the hybrid rig was cast and allowed to sink to the bottom. Then wind down to take up the slack, now two slow turns of the reel handle, pause, allow the Crayfish to flutter to the bottom, then repeat all the way back to the boat. It was important to watch the braided line as some takes were seen before they were felt. This subtle approach takes a lot of concentration, most takes came on the drop but a few were much gentler coming after the lure had touched down. On resuming my retrieve, after the lure had settled on the bottom, I occasionally became aware of some extra resistance that saw me striking into perch, without really knowing why I’d struck? On reflection I think the perch were taking my Crayfish imitation once it was on the bottom, and they were swimming towards me as I restarted my retrieve, whatever the explanation I was now putting a very good bag of 2lb plus perch together. 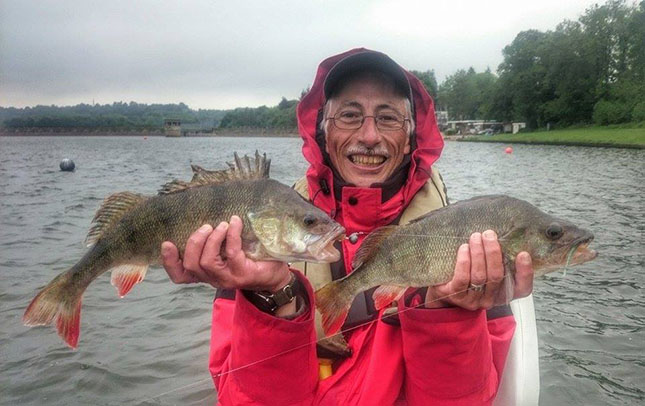 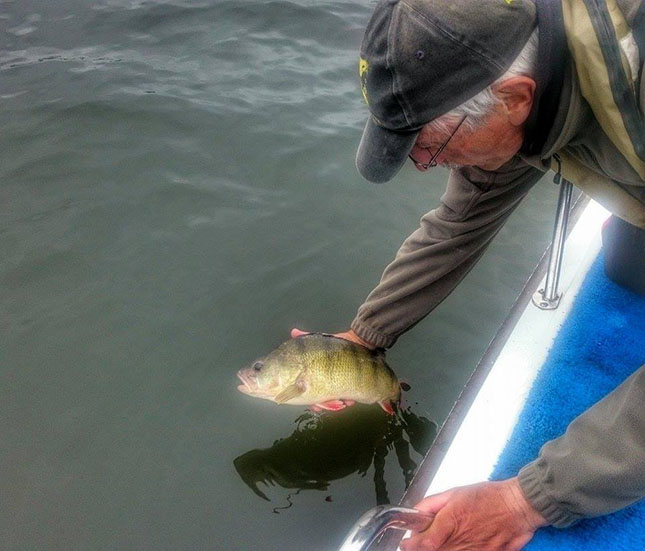 The weather had to intervene, the wind picked up and fine rain turned into a downpour. The temperature dropped so much that I could now see my breath! You had to concentrate now to continue catching, I even went without my lunch, so determined not to lose my focus.

Finally all things have to come to an end, cold and wet we decided to give the South bank a quick five minutes before packing up. We spotted a large shoal of fish around one of the buoys and as the wind was awkward Rikki hit spot lock on his engine, effectively anchoring us within casting range of the buoy.

First cast, “fish on”, two casts later, another “fish on”, I’m on a roll. “Can I have a couple more casts” on the other side of the buoy I ask, before we go in? First cast nothing, second cast and everything locks up, “fish on” but something’s not right? It’s not heavy but there’s a lot of resistance, eventually all becomes clear as two plump perch surface, 2lb 11oz and 2lb 8oz.

I’ve just had another, pinch yourself to make sure you’re not dreaming days, with 15 perch over 2lbs including fish of 3lb 2oz, 3lb 4oz and 3lb 8oz. Incidentally the longest perch was 43cm which was the fifth heaviest at 2lb 11oz while the heaviest fish measured 42cm.

So what is in store for us next month?