Having identified a successful pattern in our captures Rikki Cooper and I were keen to see if we had indeed “cracked it”. I wondered whether the perch were reacting to our lures in an aggression manner, purely biting them as they invaded their space, or were they actually targeting them as food? We were dragging our Fox Spikey shads along the bottom and the thought crossed our minds that this could be a feeding response, as Weirwood has an abundant Crayfish population.

I was showing Brendan Lanigan the fishery owner the Crayfish lure I was going to use while Rikki loaded the boat. Mounted on a special “boot foot” jig head, the lure stood upright, it looked “the business” with its claws flaying as I hopped it along the bottom. 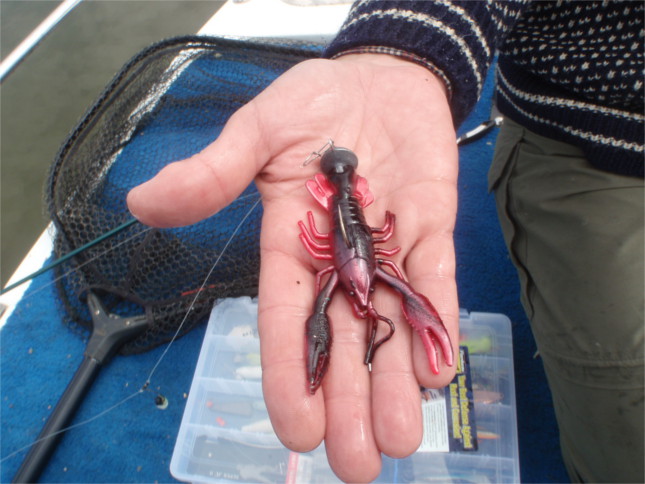 We started by targeting the gravel humps, we knew the Perch lived here after our previous trips; we set our drift to dissect the area, dropping our lures to the bottom we both waited in excited anticipation. As our lures dragged up the shelf, the rod tips are juddering; occasionally the jig heads grab the bottom only to be pulled free by the boats drift. Suddenly Rikki’s ‘Spikey shad’ is nailed and the tell tail nodding of his rod top confirms it’s a Perch. The “hybrid” Dropshot rig does it again, this has been so successful that Rikki rarely fishes anything else, and why not. The method involves letting the lure drag along the bottom with occasional gentle hops followed by lowering the rig back to the bottom, rather than a sharp jigging action. The Perch really seem to like this action as Rikki catches a couple of nice Perch, while I’m struggling again! A few more drifts and two 2lb Perch have now fallen to the  “hybrid” method, Spikey’s in Lemon Tiger, Glitterbug and Fire Tiger colours have all produced fish.

Takes dry up fairly quickly, it’s not surprising as we’ve given it a “Tonkin” over the last few weeks. We decide to change tactics and anchor up close to one of the humps, I’m trying out a new lure from Strike King, the Rage Blade Blaster is unique, being a cross between a spoon, a jig and a chatterbait!

I cast over the hump into deep water; I retrieve the Rage Blade Blaster up the shelf, its juddering violently grabbing the bottom from time to time sending strong vibrations up my non-stretch braided line. As it nears the top of the hump it’s taken by an angry Perch. This is a first on this unusual lure; I’m expecting great things in the future as the water warms; the Rage Blade Blaster has an aggressive vibrating action on a straight retrieve, while it can be effective vertically jigged or used in any combination of these two methods. 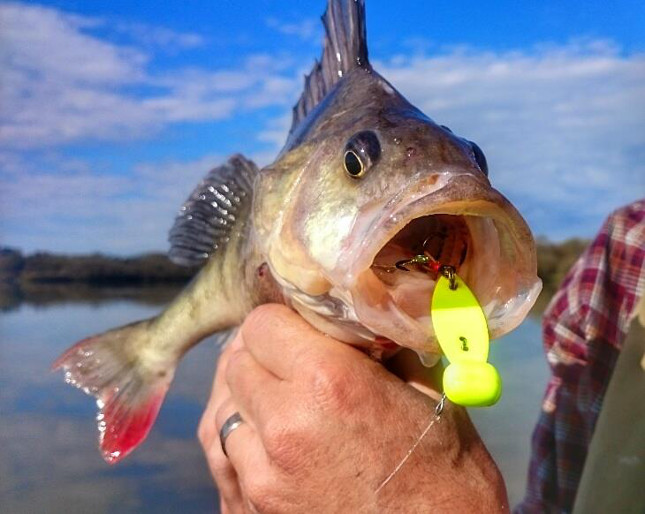 I decide to try Rikki’s “hybrid” system next, the only difference is I’m using my Crayfish lure instead of a shad; I’ve a 6cm mini shad on the Dropshot hook. After my success casting into deep water and working back up the shelf I fire my next cast in the same direction, well it would be rude not to. As the rig crests the top of the hump I pause, letting the Crayfish sit on the bottom, I drop the rod tip creating some slacken line, this allows the mini shad to fall, I gently lift the tip tightening up, this lifts the lure up, without moving off the spot. I amuse myself for a while doing this, but nothing happens, so a short flick of the rod sees my Crayfish hop off the bottom, wham! A violent take right under my rod tip at the side of the boat startles me, after a short scrap one very angry big Perch surfaces. On inspection my Crayfish is nowhere to been seen, it’s necked it! I’m ecstatic; I’m convinced I’ve completely deceived this fish with my imitation. 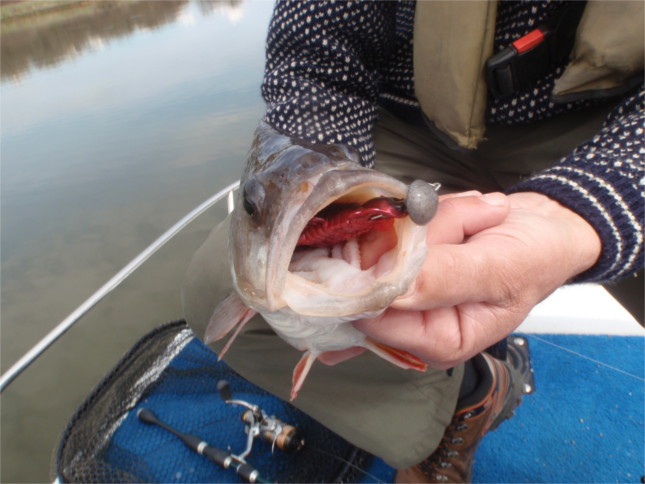 Later as we move spots I catch a pike on the same rig, but this time I think it’s taken because it came within range of a feeding fish. We were trolling the lure behind the boat, way off the bottom, so I’m pretty sure my lure was not taken as a Crayfish, just an easy unsuspecting meal, or so it thought.

The humps were the holding spot it seemed for pre-spawn fish, there were some real fatty’s amongst them, fish after fish over 2lbs were boated by both of us. We tried a variety of lures including; shads, chatterbaits and spoons but it was only the shads and Crayfish that really produced the fish. For the finale Rikki boated a superb fish of exactly 3lb, we were in a daze the calibre of fish we were catching was amazing. 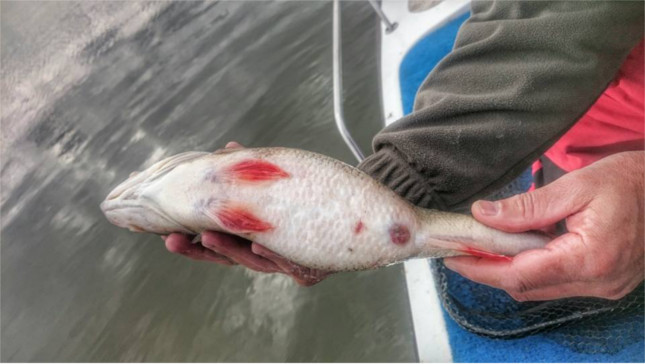 We couldn’t believe our luck; we only decided to fish Weirwood to kill time while we waited for other waters to re-open. At first it was dire but gradually we’ve pieced it together and stumbled on some fantastic sport.

A lot of the fish we were catching looked slightly the worse for wear, looking old and dark, due to spawning? This left us wondering where the younger fish were and if there are any more surprises in store for us. Oh well we’ll just have to return to find out!

As you can imagine our next visit couldn’t come around quickly enough, but to our disappointment the ”hot spot” had gone “cold”. Try as we did we only extracted one proper Perch over 2lb, what to do next?

Having established the critical depth as 15 feet we decided to focus our search all along the shoreline keeping within a depth band of between 10 and 20 feet, just in case the fish had either gone shallower or deeper? We watched our Hummingbird’s screen intently for any signs of bottom hugging fish, which we knew would be perch. We noticed individual shapes tight to the bottom that often proceeded the hooking of a big Perch, so we knew what to look for. Once a potential Perch spot was found we made several drifts through the area picking off more specimen fish.

The method was the same as before, only the location had changed. Our success inspired us to keep searching for more “Perchy” spots. As I spotted a fishy looking return on the screen I warned Rikki to, get ready, hardly had I uttered the words when my rod lurched over and  I set the hook. I was puzzled by the weight, yet the tell-tale thump, thump on the tip told me it was a Perch but surely not, as it stayed deep even taking line off the drag, Pike! We both relaxed as I brought it to the boat when the most enormous perch surfaced, our jaws dropped as panic set in, “get the net”. OMG, I’m delighted with my new UK personal best of 4lb 4oz! 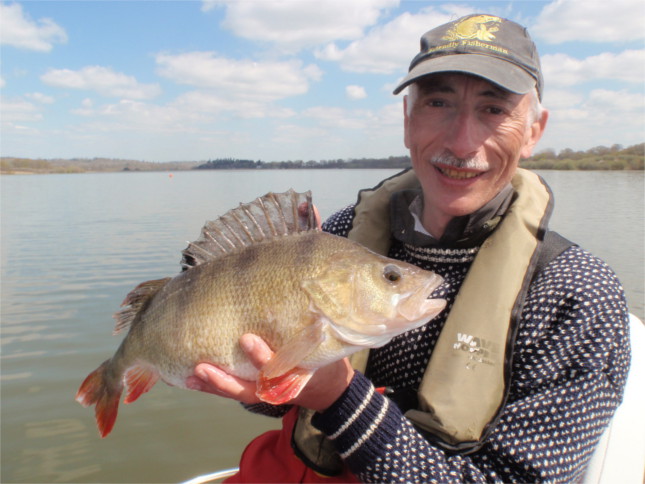 After pictures and back slapping we had to try another drift through the area. This time Rikki’s in, “fish on, it’s a Perch, but somethings not right”, I wait with the net at the ready. As Rikki’s Perch surfaces I see another following it, I’m about to grab my rod when I realise it’s on Rikki’s line too! What a brace, 3lb 4oz had taken the Dropshot lure while a 2lb 10oz fish had taken the shad, wow this is surreal! By now we are beside ourselves, more back slapping, and congratulations and giggling, we can’t believe what’s just happened. 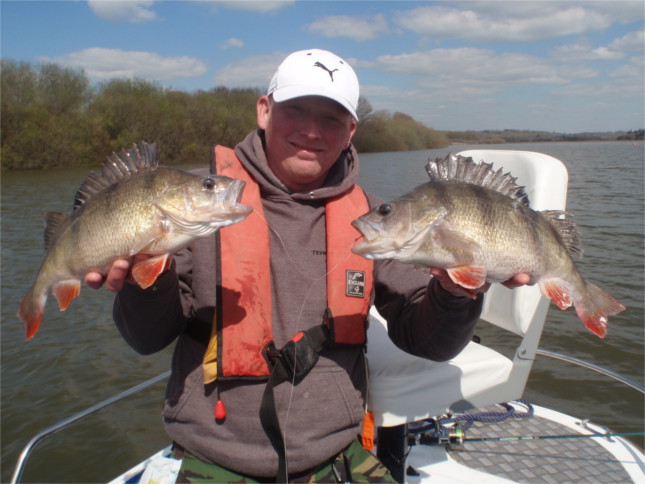 As this fantastic day comes to an end we’ve added a few more 2lbers, this can’t really be happening can it? It’s going to be a long wait till next September when Weirwood’s predator season re-opens.

For my local fishing I’m intending fishing Bewl Water for Pike, on the fly as well as on lures. I’m also aiming to target Grafham reservoir for Zander and Pike, also on the fly.