My regular fishing buddy James Gardner and I made our now annual visit to Holland in search of jumbo Perch. We were joined in the quest by our two fenland friends Andy Blazey and Rick Wesley; James was really looking forward to wetting a line again after a long absence from the water of nearly two months. You can imagine how excited we all were at the prospect of catching enormous Perch. Over the last few years we have been fortunate enough to fish with Shimano’s lure fishing Guru Willem Stolk and his fishing companion Adje, both are experts on the waters we were going to fish. 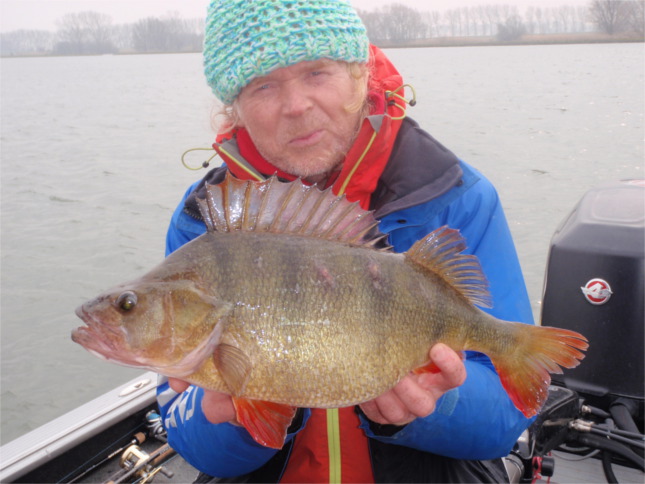 We were fishing in southern Holland not far from Rotterdam, the river Waal is big, when I say it’s big it’s hard to convey the size. By comparison the river Medway is a stream and the river Thames by the Houses of Parliament is about a quarter of the width, yes it’s that big! The “flatlands” that surround this huge expanse of water means you’re exposed to the wind which ultimately makes boat control and fishing very testing indeed.

Our game plan for this short visit was simple, plan ‘A’ cast lures into the shallow shoreline in search of pre-spawn Perch that would be accumulating for the big event, plan ‘B’ was to fish our lures “vertically” over the deep water humps adjacent to the spawning areas. The Perch that remained in deep water were still feeding having not got the urge to make the spawning migration, as yet.

James and I had decided to focus on targeting the shoreline shallows, we knew there would be far fewer fish here but they would be big and aggressive, protecting their chosen spawning site. Willem positioned the boat to travel along the bank within casting range. What we needed to do was select the right balance of jig head weight for casting distance and sink rate.  Too heavy and your shad would fall into the rocks and snag up, too light and the strong wind would blow your lure off target. You also had to factor in the need to get a fast enough “drop” for your shad to fall down the slope as the shallow margin fell into deep water, another “key” target area. Our 10cm and 12cm lures were rigged with 12g, 14g and sometimes 18g jig heads, we needed to adapt quickly to the changing terrain so we had a good supply of lures pre-rigged. You have to concentrate on what you’re doing at all times if you want to succeed.

The vertical option is far easier in our opinion as your guide’s boat control affects your lures depth and speed of drop far more than you. You still need to get the jig head weight right, enough weight to reach the bottom and maintain depth is essential. Too light a weight and the line drag lifts your lure away from the bottom as the boat drifts, too heavy and the bait falls lifeless to the bottom and snagging up becomes a problem, so 30g, 40g and even 50g are necessary at times.

The reason James and I were not keen to take the ‘vertical’ option was during our previous trips to Holland we found Zander were more likely than Perch to fall to this presentation. Nothing wrong in catching Zander, James and I love catching these feisty creatures, but Perch were what we wanted there are true giants swimming in these waters so that’s why we were so focused on the casting option.

On this trip James managed 2 Perch over 5lb topped by a fantastic fish of 6lb 1/2oz, my largest fish was 4lb 12oz while Andy Blazey managed 3 Perch over 4lbs on the last day and Rick Wesley was unlucky not to top the 4lb benchmark especially as he caught more fish than any of us, better luck next time!

The saga continues,  angling guide Rikki Cooper, predatorpro.co.uk, and I were back at Weirwood reservoir attempting to catch Perch or Pike. I was very upbeat after my recent trip to Holland, I couldn’t wait to get back to the ressy and have another go. We were greeted by the water level having risen and the clarity had visibly worsened! At the “top end” visibility was less than 6” while at the Dam it was slightly better with as much as 10” visibility. We spent the first few hours casting; shads, crankbaits and chatterbaits into the shallows, “just in case” there were any pre-spawn Pike in residence, if they were there we failed! So off to the deeper water where shoals of baitfish had been on our previous trips but to our disappointment we struggled to find any concentrations on this occasion. Rikki “parked” the boat using the “anchor” mode on his Minn Kota engine, we were positioned over  “the trench” a feature we had “marked” using the ‘GPS’ function on his Humminbird sounder.

We cast a selection of shads, around the feature, they were mounted on light-weight 15g jig heads. At the end of each cast I slowed the retrieve and just hopped my lure under the rod tip, as the lure approached the boat, surprise, surprise I fluked a Perch, so no blank today! “One swallow doesn’t make a summer” despite a lot of effort we caught no more fish. Our next gambit was to slowly drift over a gravel bar and some humps off the North bank. We deployed the drogue to control our drift speed, first drift and I catch a mini Perch, I was now using a Dropshot rig, could this be the method? Two unproductive drifts later and no more fish mean I’ve not sussed it after all. By now Rikki is slowly hopping his ‘Fox Spikey’ shad close to the bottom, in fact he’s lifting his lure occasionally just to check its depth, making sure it’s very close to the bottom, fish on! Over the next hour Rikki catches several nice Perch including a “brahma” of exactly 3lb! I on the other hand can’t buy any bites now! I change back to my jig but still nothing, after “debriefing” Rikki I adopt as near as I can his method and I start catching Perch too. By casting my shad up-wind and allowing it to trundle along the bottom I’m able to drag the lure across the deck, my rod tip is juddering as we drift over the gravel, takes were recognised when I lose contact with the bottom, fish on!

We finish the day with 10 Perch, 8 in the last 2 hours, so we think we’ve established a pattern? If so we may have a method to unlock Weirwood, I can’t wait until our next trip.