It’s been rather lean pickings for me over the last month the cold North Easterly wind has made it unpleasantly cold, and it has to be said that I’ve never had a productive days fishing on an Easterly wind. I nearly said I’ve never had a good days fishing on an Easterly but whatever the conditions it’s rare not to have a good day when fishing, unless you break something, other than your personal best! So having got my excuses in early here’s what’s happened this month.

After the limited success on our previous visit, Rikki Cooper and I returned to the reservoir with renewed optimism. We had hoped the water would have cleared a little in the intervening week but there was little improvement, thankfully it was still fishable. We had been tipped off by fishery manager Brendan Lanigan that local match anglers had been catching plenty of “silver fish” including a few small Perch, along the ‘Wall’ between the lodge and the sailing club pontoon. By the way Weirwood’s new phone number is 01342-822212.

As we loaded the boat we noticed fish topping and Grebes diving where Brendan had indicated. So we decided it would be rude not to fish here first before heading up to the “top end” near ‘Admiral’s Wood’; this area had the clearest water on our last outing. Rikki positioned the boat within casting range of the wall on one side of the boat, and strategically within casting range of the shoals of baitfish holding around two humps in the deep water on the other side, we were surrounded but could we catch? Eventually I caught a small Perch that took my lure so gently that I’m not sure why I struck? That was all we could muster despite our best efforts so after this short interlude we made our way up to ‘Admiral’s Wood’. The wind was a North Easterly which had pushed, to our surprise, the coloured water that had previously been down by the ‘Dam’ up the ressy, so our clear way spot was no longer there, a change of plans was in order.

After a fruitless hour at the “top end” we moved back to the Dam where the water was appreciably clearer. We deployed the drogue and set the boat to drift across the face of the Dam through the deep water, again there were large shoals of fish here. Weirwood is loaded with fish, I can’t say for sure what they are, probably Roach and Bream, if they’re Perch then we’re rubbish anglers! 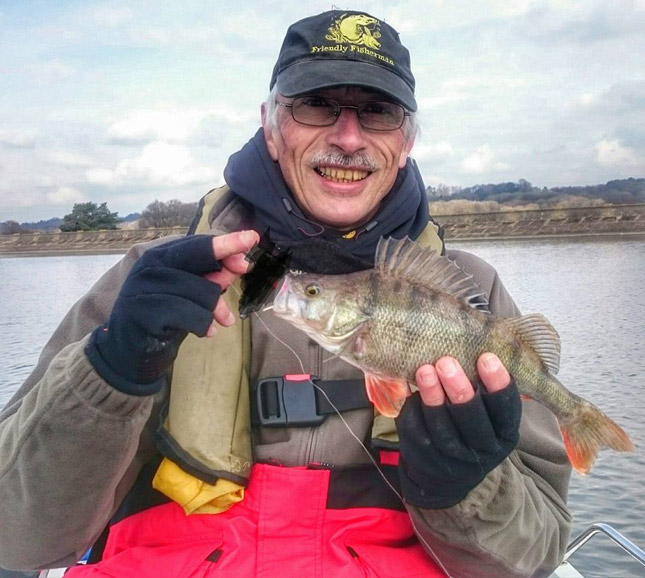 I had now reverted to “vertical jigging” having previously been casting and retrieving my shads, “horizontal shadding”. My reasoning was, with the Pike and Perch switched off I wanted to keep my lure very close to the bottom at all times and “vertical jigging” does exactly that. I was gently flicking my lure up off the bottom, and then allowing it to drop before hanging it within inches of the deck. To my surprise I had a sharp hit that resulted in a very dark coloured Perch, not a monster but welcome all the same. As we continued the drift the sun went in as the wind picked up, time to put an extra layer of clothing on. I propped my rod up against the boat’s railing to put my coat on, fortunately I glanced at the rod just in time to see the tip dragged over as another fish thankfully took my lure. To my surprise this fish wasn’t a Perch but a Pike, and a good one at that. My favourite St Croix rod took on a satisfying bend as the fish stayed deep; slowly I eased the fish to the surface where it was quickly netted by my boat partner Rikki. It’s been slim picking recently so we popped the Pike in the sling just to confirm my estimate of 16lb; in fact I’d under estimated by 2oz, result. 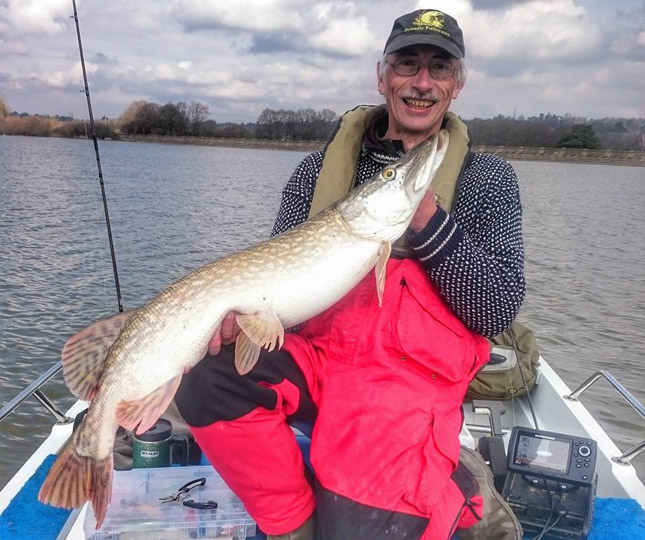 After this initial success I’d like to report we’d found the “pattern” for the day but the action stopped as quickly as it started and that was the end of another frustrating day.

On our most recent trip Rikki Copper and I encountered Pike in spawning mode, with several fish in the margins. We spotted the occasional swirl and spent some time targeting the area just in case a big girl was prepared to have a snack. All that occurred was one small jack Pike to Rikki, a male fish of about a pound while I missed a couple on my shallow diving crankbaits. We gradually worked our way along the shoreline stopping at every likely looking spot but as the North Easterly wind strengthened in the afternoon we finally conceded that our window of opportunity had passed.

Plan ‘B’ we set up a drift along the North bank in depths ranging between 10’ to 15’ hoping to intercept any fish that were holding out here in deeper water, in preparation to spawn. A few drifts later and finally I got a take, the characteristic head shaking confirms it’s a Perch which surprised me because in felt rather weighty. After such a lean period I was very pleased as a plump Perch appeared on the surface, a nice fish of approx. 1lb 8oz. 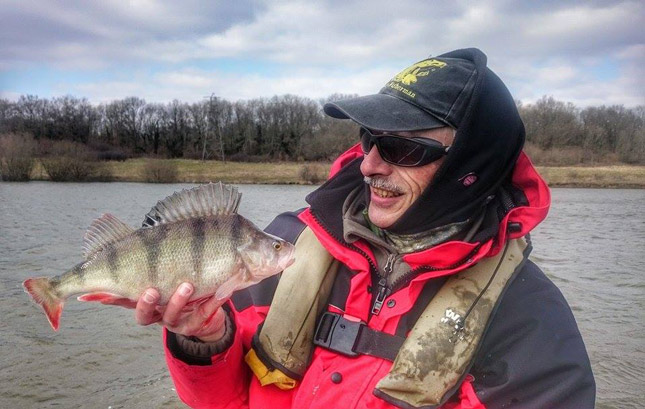 Andy with a plump pre-spawn Perch 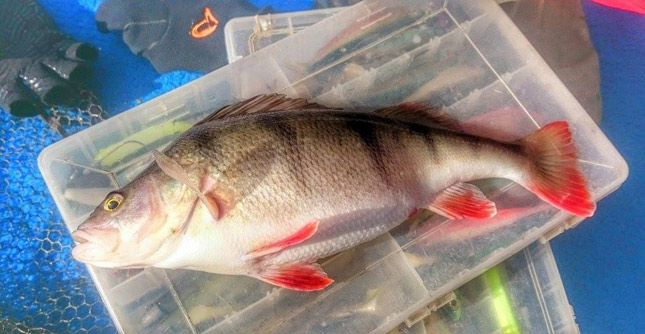 The Pike and Perch will be making their annual spawning migration in earnest anytime now. On small waters it’s possible they’ve already “done their business” while on the reservoirs it could be another week or two. The predators spawn much earlier than Roach and Bream, “silver fish”, these prey species provide food for the young predators and the exhausted adults make an easy meal for the larger pike. Spring migrations are key events drawing fish into the shallows, as well as concentrating them. Locate these concentrations of fish and you could well have a “bean feast” or catch the “fish of a season”. Understanding these migrations is knowledge that is only acquired over many years of fishing, it’s known as watercraft. The most successful anglers are usually the most persistent; they know that being on the water first as the action kicks off again means they will be rewarded with bumper catches.

Post spawn the predators will stay in the shallows throughout April and May so if you have access to Pike and Perch waters during this period you should start shorting through your crankbaits and surface lures now! Put your sinking baits to one side, you’re now going to need lures that can be fished in shallow, often weedy water. Floating diving baits that can be fished over and around these fishing holding weeds are going to be essential if you’re going to succeed.

My “top tip” for the spring is, expect the action to pick up as the day progresses, and do not fish around the weed beds early in the morning as the water here will be oxygen depleted. Weeds absorb oxygen during the night but by late morning, as the sun reaches its highest, the weeds will be producing oxygen and providing shade which will draw fish in. Expect the best action during “bankers hours” 10am til 3pm before the chill returns. Get these elements right, location, presentation and you’ll enjoy some of the best lure fishing of the year!


A final reminder for the Lure Anglers Society ‘Lurefair’.

This event will see more lures and more lure anglers in one place than anywhere else in the UK! Guest speakers include Des Taylor, Dermot Ogle and Ben Field.

Well that’s all for this month, I’m now preparing my tackle for my annual trip to Holland in search of jumbo Perch. Wish me luck!