One door closes another door opens......

I’d like to thank all the staff at Rutland and Grafham reservoirs for another fantastic predator season. What a winter it’s been, I’d also like to thank all those who I’ve shared boats with this winter, it’s been a blast, literally! The highlight has to be, without any doubt, Ian Crook’s capture of a colossal 19lb 14oz Zander from Grafham, it’s just a pity I wasn’t there to witness it. Bravo Ian. 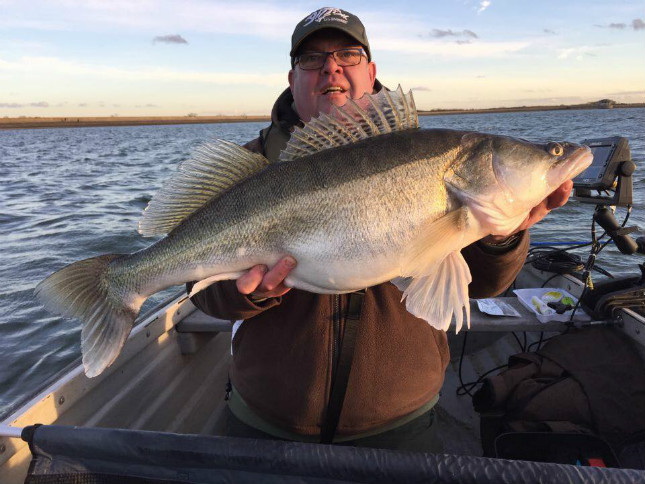 Zander fever is contagious and shows no sign of slowing; with the addition of jumbo Perch appearing across the country, we’ve seen a huge increase in interest in lure fishing from anglers and the media. The great thing about both species is the fact that they are shoal predators, so if you get it right you’re in for lots of action and fun. Techniques are evolving quickly and our understanding of how to apply them is improving too. 3lb, 4lb even 5lb Perch are now being caught on lures, from the humble Mepps spinner, that still accounts for huge numbers of Perch and Trout, to the modern rattling crankbaits, jigging spoons and not forgetting the very effective, soft plastic worms, grubs and shads.

Anglian Water’s predator season is now closed, until next September, so what’s next? 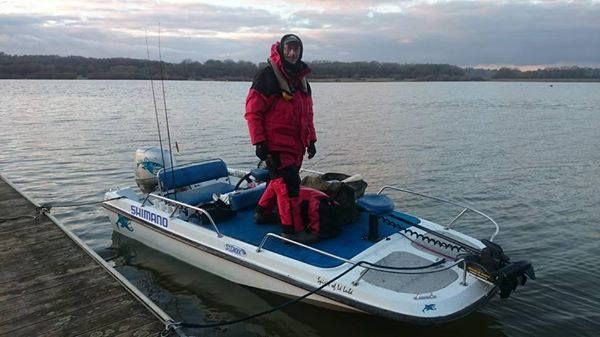 I recently visited Weirwood reservoir [RH18 5HT] with my pal, angling guide Rikki Cooper, for my first post Zander trip. We were both aiming to catch Perch, as the water was as expected, very coloured. Perch are better suited to these conditions; coloured water is the kiss of death in the winter for Pike fishing. Rikki had brought his boat along, so was captain for the day, we visited several features he’d found on previous trips that held baitfish and Perch. We made several drifts through areas containing huge shoals of Roach and skimmer Bream but apparently not Perch.

We were vertical jigging as this method guaranteed our lures would always be close to the bottom, whatever the depth. As the day progressed our search area widened taking in the whole of the deep water from the dam right up to Whale Beach. We finally ventured up as far as Admiral’s Wood, at the top end, surprisingly the water was less coloured here. In fact it looked as if it was starting to “fine down”. With the top end fed by several streams I was expecting it to be even dirtier than the main reservoir, but I was wrong.

We now focused on the old stream bed, without success. Slowly the day was slipping away and we were no closer to catching, anything! Late afternoon and we reluctantly wend our way back to the boat jetty. I was pointing out features of interest to Rikki; I’d been a member of a Pike syndicate here some 20 years ago when Wierwood operated as a Trout fishery, so I had a good working knowledge of the water.

As we approached Birch Wood bay, in 15’, I have a slamming take that startled me, talk about a “wake up” call, the culprit is a nice scrapper double Pike. After a short fight it’s back to business, just hopping and hovering my dark coloured shad close to the bottom, 15 minutes later, wham I’m in again. What a way to finish off the day, as we pack up our grim day has suddenly taken on a different complexion and we feel very “upbeat”. 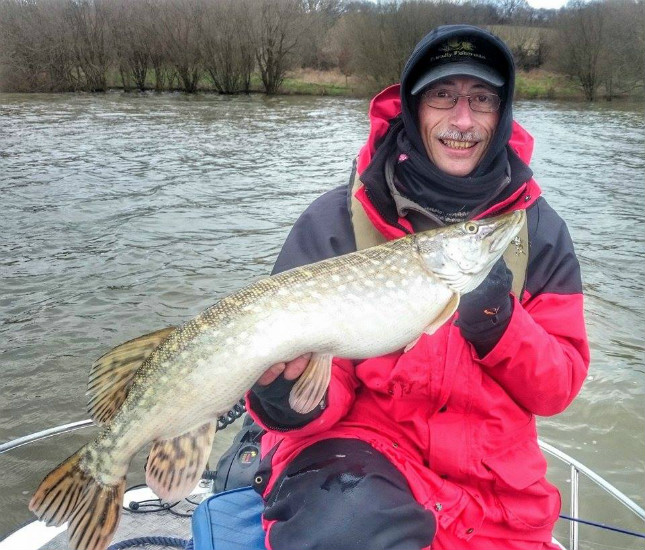 On reflection maybe we were too obsessed with targeting the shoals of baitfish in deep water? The coloured water made us also dismiss the prospect of targeting Pike, which on reflection was a mistake. But the biggest mystery was, where were the Perch?

One thing worth noting was my choice of shad, first it was chosen because it had a big paddle tail that omits lots of vibration alerting predators to its presence, plus it was a dark grey colour. It’s surprising how reluctant predator anglers are to use black, dark red or other dark colours in dirty water. I’ve learnt from my fly fishing and wreck fishing experiences that these colours catch fish in low light and dirty water.

With the absence to direct light, colours we see are filtered out by water due to refraction and sediment, the fish are seeing our lures in silhouette in these conditions. Black and other dark colours show a sharper silhouette and are a better choice than the bright colours we often turn to.

Well after that trip it would be rude not to return and see if we can crack the Perch code?