I celebrated New Year’s Day with “Zandermaster” Rikki Cooper on Rutland Water in Leicestershire. We had intended fishing earlier in the week but the weather had other ideas. Having had to cancel the two previous days due to gale force winds we were greatly relieved to finally be afloat. We started the day fishing on top of a shelf that plunged from 50’ into 80’. We were hoping to intercept any Zander that were still active after their night time feeding spell. We picked off the odd fish at the start of the drift but enjoyed much greater success fishing at the bottom of the slope as it bottomed out into 80’. Rikki was using his ever reliable Fox Rage “Tiddler Fast” in Salt N’ Pepper colour, he was getting takes regularly, in fact he was kicking my ass! I was having one of those “let’s try something different” days, I was experimenting with larger baits in the hope of sorting out a better stamp of fish. My choice was one of Westin’s “Twin Teez” lures in Fireflake colour. I was getting far fewer bites than Rikki, but I’d expected this, those that stayed on were slightly bigger than average with the occasional fish of 5lb+, so I was happy. Once the takes dried up we went exploring around a few of our favourite spots, again Rikki was getting more takes than I, it often happens that you get in a rhythm working your lure that is just how the Zander want it and bites come thick and fast while the other angler, me, struggles to crack the code. I continued to swap baits hoping to find a bait to out fish Rikki’s “Tiddler Fast” but on this day it didn’t happen, battered! 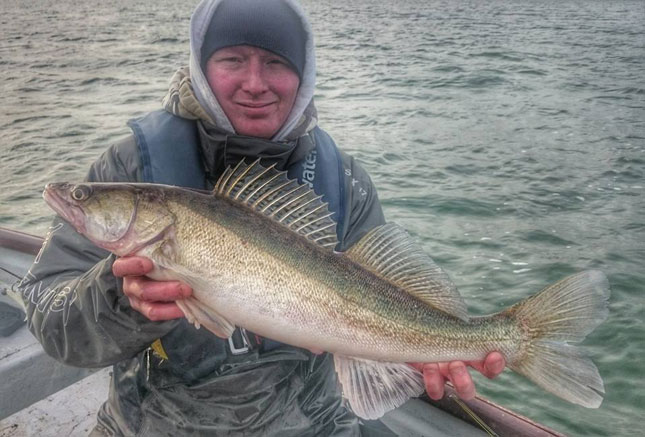 Two days later and I’m back again this time with James Gardner, my usual fishing partner. The forecast was for rain, lots of it, with increasing winds over 20mph gusting up to 40mph, deep joy! I donned my chest waders; I was not going to get wet if I could possibly help it. I was captain of the boat so our first drift was exactly where Rikki and I had been catching. I was sure there would still be fish in the area but this time I decided not to be proud and selected a small bait; my view was to get plenty of action, on what was promising to be a dirty day.

My lure choice today was a Megabass “X layer” in Shrimp & Minnow colour, was mounted on a 50g jig. The heavy jig was selected to get a “fast drop” after each initial upward snap, this we’d found induced more takes than the usual “slow flutter” drop that we normally use. First drift produced 5 small Zeds, a good sign we’re “on fish”. The wind picked up shortly after this and our drift speed accelerated making it impossible to fish down the drop off effectively. After umpteen unsuccessful drifts we decided to focus all our attention on the bottom of the slope. It’s a constant 80’ here and although fish are present they’re more spread out but we’re now able to make contact with the bottom and our lures. The weather is wild now lashing rain and swirling gusts of wind make for very testing conditions, unsurprisingly a ll the other boats have packed up and returned to base. James and I are “persistent”, or stupid, and we tough it out finally packing away just before dark. We’ve accumulated over 30 Zander and a bonus couple of Perch. We must have looked rather forlorn because one of the rangers offered us a warming drink as we unpacked the boat! 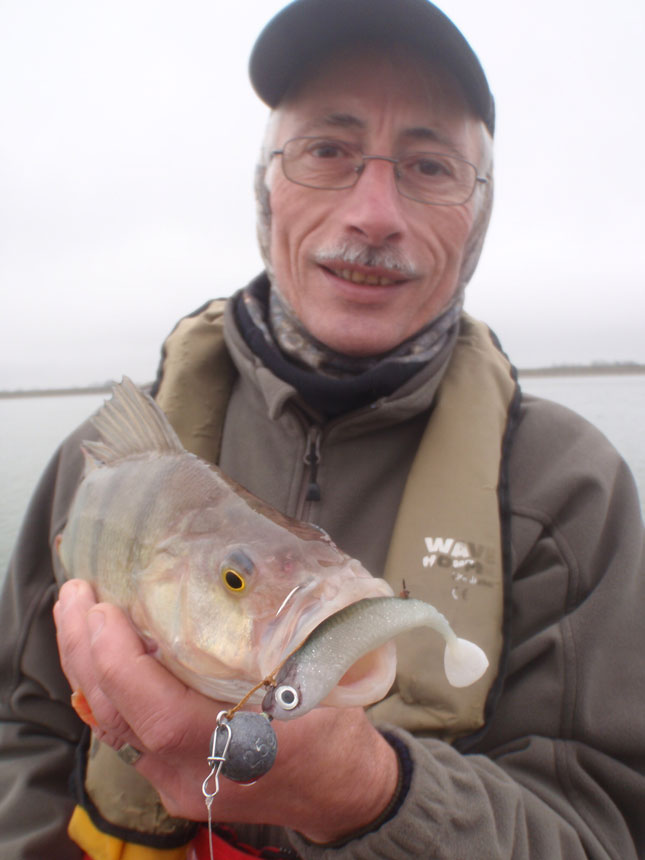 It’s that time of year when we look back over the past 12 months and reflect on the high and lows and lessons learnt?

Without a doubt the highlight of last year was my trip to Spain in September. My friends and I were in Extremadura fishing for Zander on a large reservoir where the boat fishing is very restricted. In fact half the lake is closed to fishing for 7 months, so our trip was timed for the “open season” in late September when temperatures would be more bearable. To say the fishing was good is an understatement; it was so exciting being on the water when the Zander were actually feeding! Back here in the UK our Zander fishing takes place in the autumn and winter and most of the time we are targeting in-active fish that have to be “triggered” into taking our lures. Takes when they came were savage affaires almost ripping the rod from your grasp, subtle they were not. No real monsters were caught but they were all lean mean fighting machines. 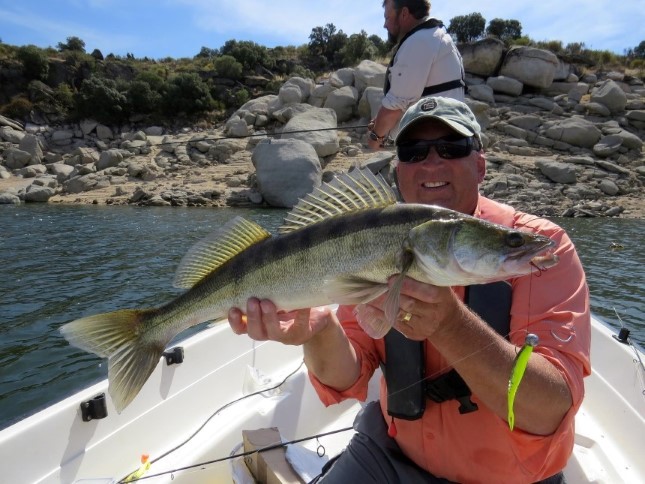 Farmoor 1, what a surprise that was we visited this water originally to fish for Pike but very quickly it became apparent that Farmoor held some truly superb “wild” Trout. I say wild which is not entirely true, Farmoor 1 has a “catch & release” policy which sees the fish going “native” adapting to feeding on naturals and behaving as individuals rather than shoaling, which occurs on all the waters I’ve ever fished before. We spent a few days fly fishing Farmoor 1 and the sport we enjoyed was incredible and so was the condition of the fish, definitely on our list of places to fish this spring.

On our Spanish adventure we had planned to fish a “secret” water where we intended sight fishing for Spanish Barbel using dry flies. We’ve had tremendous success on previous trips during the spring but on this occasion the water was stained a thick milky green colour that made it impossible to sight fish for anything smaller than a whale!

James Gardner and I have been fortunate to fish in Holland several times in the last few years and one thing we have learnt is that you have to be prepared for bad weather. Our trips are usually in the winter or in late March, before the “predator” season ends. In fact 50% of the time spent in Holland has been severely affected by high winds. I know it’s a cliché but Holland is flat so you have to learn to deal with this or stay at home! We mainly fish from boats in very large rivers that have a lot of commercial boat traffic which also adds to the unstable conditions. Our main approach for Perch and Zander in casting soft plastic shads, we make sure we have a good selection of jig heads in various hook sizes and more importantly head weights. Getting the balance right is critical; you have to consider the depth of water and the current speed when choosing your jig. We prefer to keep the head weights as light as possible so that our lures are “alive” on the drop as we flutter them through the depths. When the wind is gusting we have had to adapt to using heavier weights and more aggressive retrieves to stay in “contact” with your lures. Get it wrong and not only do you catch less fish but you also lose lots of gear. The rivers we fish have large rocky groins extending out into the flow to protect the banks from erosion, these features hold plenty of fish but the they do claim lots of lures if you are not “tuned in” and aware of where your lure is. 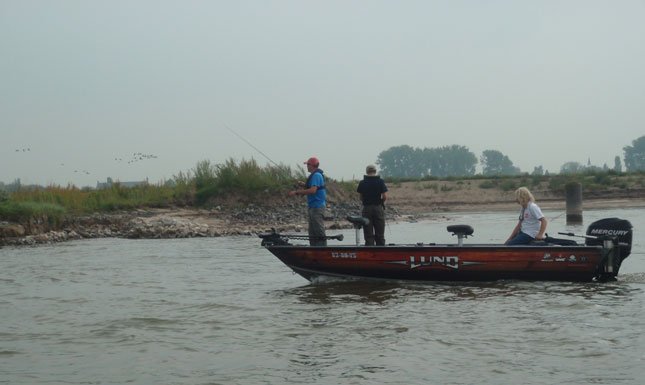 One of the things I most enjoy about fishing is the scheming that takes place before a new fishing adventure. There’s something very special and exciting about the planning stage of a fishing trip. It doesn’t have to be abroad just further than your local fishing venue. For me this can be trips to Rutland or Farmoor fly fishing for Trout, Grafham or Bewl fly fishing for predators, or a long weekend in Holland lure fishing for Perch and Zander. But without doubt the highlight of the year is our Spanish Safaris with the sun on your back fishing big waters for wild fish! Bring it on.

Have a great year whatever you’re fishing for in 2016.