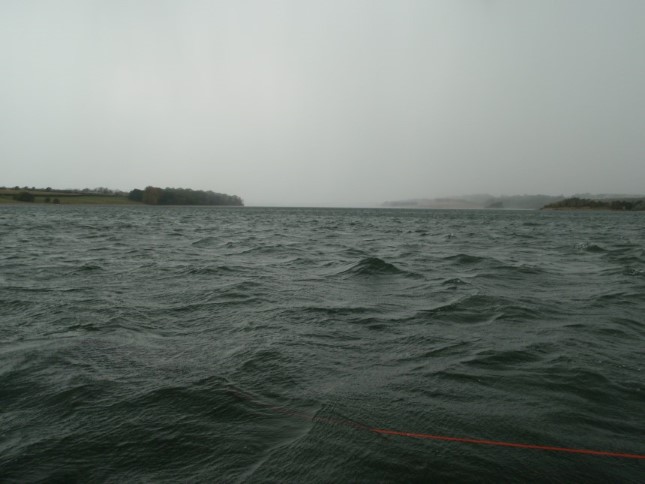 Rutland on a wild winters day, not for the paint hearted

The shrill sound of my alarm signals it’s time to get up, 4am! What makes a perfectly sane person get up at such an unearthly time in winter, several hours before dawn? Well I’m going fishing of course I still get excited the night before going on another adventure.

I suppose I’ve never grown up really despite my advancing years, fishing allows me to return to my irresponsible youth when nothing seems to matter more than what I’m doing at that moment, “time stands still”. I’m sure anglers wives and girlfriends can testify to burnt dinners, missed dates and other arrangements that have fallen foul their other half’s late arrival.

So I pack my car in the dark and start my 2 hour journey to my chosen destination, most of the winter season is spent fishing Grafham and Rutland reservoirs. My target species as I’ve mentioned previously are Zander although Perch and Pike will be targeted too.

Everything is transferred quickly into the boat, my echo sounder is switched on, rods tackled up, lures attached, and I’m ready! 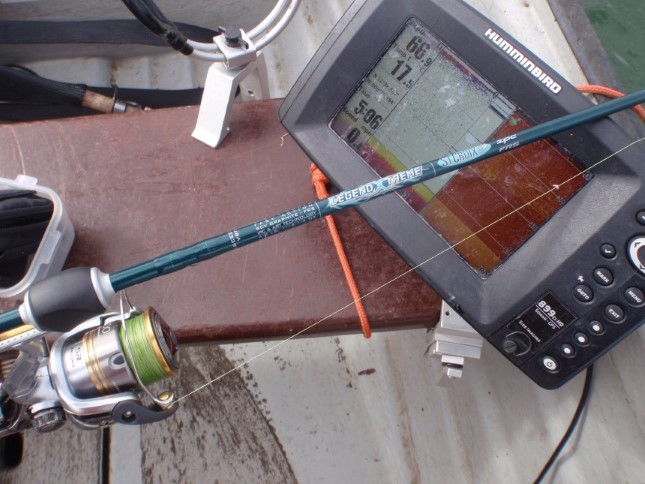 Tools of the trade

Where to start? As we all know the winter weather has hardly started, with only the occasional frost, water temperatures are much higher than usual. This makes location very difficult as the food fish are well spread across the reservoir and so are the predators.

I’ll start my first drift to cover a range of depths between 40’ and 60’ I hope to find shoals of Perch here with the attendant Zander or jumbo Perch. I fish with two lure rods, the one I’m holding is described as “active” while the other has a lure positioned just off bottom suspended under the rod tip, this is my “dead” rod. This system of using two rods is worth a mention as it can help identify how to work the lures effectively on the day. If the “dead” rod attracts more takes than the “active” rod then this should tell me that I’m working my lures too much and should calm my jigging action down.

I’ve just returned from a four day trip to the Midlands where I mixed some business with pleasure. Day 1. I’m joined by journalist Steve Phillips from ‘Lure’ the on-line magazine specialising in fresh and saltwater lure fishing tackle and techniques. www.lure-mag.com I was doing a feature for the magazine on our approach to jigging for Zander. The weather was lively to say the least, strong westerly winds and persistent rain made it very testing conditions indeed. I motored into the North arm seeking some shelter I set my boat to drift across the arm to the feature known as the “pipe” which runs down the middle. I was hoping to find some fish and as luck would have it I caught a couple of small Zander but although I tried other passes along the pipe I failed to find any concentrations of fish. Gradually the wind eased, as forecast, so I made the decision to move into the “South” arm where I focused my drifts around the “inlet”. The inlet is where water is pumped into the reservoir; this feature looks like a large whirlpool and can at times hold large shoals of predators, both Perch and Zander. On this occasion I struggled to catch what was puzzling me was the fact that we were drifting up-wind! The drogue that is deployed to slow the drift speed was in fact catching the current and dragging us up against the wind! The water was backing up against the wind too, creating some very choppy water, which made it difficult to remain in contact with your lure. After repositioning the boat as close as I could to the inlet I cast my jig into the caldron of water and allowed my lure to hit bottom, the retrieve was more “sink and draw” than jigging but two quick fish confirmed that there were some Zander caught. All I needed to do now was work out how to fish in a more controlled fashion? My next move was to position the boat on the downwind side and drift away from the rough water. This produced a few more fish including a couple around 5-6lb mark, job done. That evening I was the guest speaker of the ‘Rutland Water Fly Fishers’ where I extolled the virtues of Zander and Zander fishing and how they coexist with trout in the reservoir. There was a go turn out and I fielded lots of interesting questions on the fish, the tackle and the techniques we use, a thoroughly enjoyable evening was had by all. 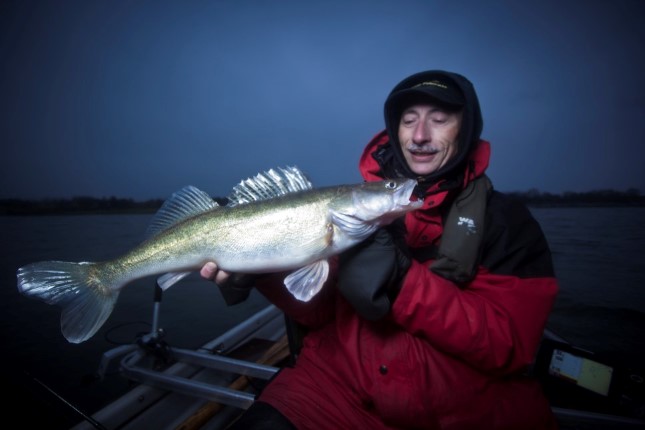 Last gasp fish from around the inlet at Rutland. *Picture courtesy of Steve Phillips ‘Lure Magazine’

Day 2. I was joined by Dave Ollif, a carp angling customer of mine who wants to broaden his angling experience. Dave has been fishing for Barbel, Chub, Roach, Pike and Perch recently and now fancied catching his first Zander. A plan was hatched back in the summer when I’d promised to take him to Rutland; this is the perfect venue to show him the ropes. After the previous days experience I headed straight to the inlet for a quick fish or two, wrong! Try as we might we couldn’t extract any fish, what was happening? I drifted along the edge of the nearby drop off and we both caught a very small Zander each, time for a move. I decided to try some drifts through deeper water in the basin which had been unfishable the previous day. I started in 80’ and drifted up the slope into 50’ where a small pipe was the feature, bingo, almost every drift one of us would catch a fish, this is more like it. Having caught his first Zed Dave now proceeded to up his PB throughout the day finally getting a respectable fish of around 5lb. My day was completed with the capture of a nice Rutland Zed of 9lbs. 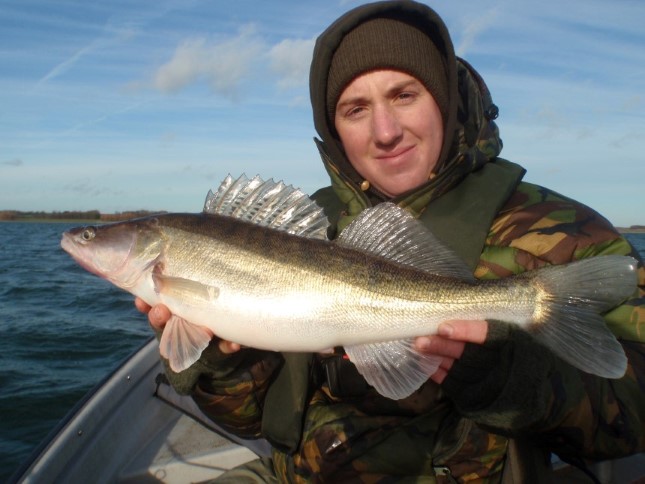 Not only a Carp angler, Dave Ollif shows he’s a dab hand at Zander fishing too

Day 3. I was on Grafham with my usual fishing buddy James Gardner we were in for a rough ride the forecast was for big winds and for once they were right! Before the gales arrived we did catch a few Perch and a couple of small Pike but Grafham Zander are very elusive but what it lacks in numbers it makes up for in size. I’ve said it before but a successful day on the big ‘G’ as it’s affectionately known is one Zander, a “red letter day” is more than one Zander. Even with my ultra-thin 0.06mm braid and 60g jigs I was still having trouble keeping in “contact” with my lure and the bottom. We rode it out in the vain hope that it would ease in time for “bite time”, about 10 minutes before packing up time. It did ease a bit but we failed to catch anything of note, although one angler did catch an 11lb Zed, well done Ma Cca.

Day 4. James and I are on Grafham again, we’re persistent if nothing else! The day starts very much as it left off the day before, slowly. We set our drifts to take us through a range of depths from 50’ to 40’. The Zander haven’t reached their “winter quarters” yet, the deep water “sump” area which is 60’. In contrast to yesterday we don’t need the drogue at all, even managing to fish vertically with 30g. In fact it’s so calm we even spend time casting shads around the “pipe”, James has several nice Perch including a real fatty of over 2lbs. The day wears on and the only Zander action goes to another of my friends, Mark Bryant, who has sussed that by overweighting his shads creates a faster drop that’s the downfall of two nice Zander of 7lb and 9lb. We are still scratching around mixing it up between jigging and casting; we even try the “sump” but nobody’s home. Back to where we started the day and I’m jigging again, it’s almost time to pack up when my lure is stoped in its tracks. The fight is dull but heavy, a Zander for sure but not very big, until it reaches the surface, when I’m glad James has the net ready to scoop my prize! A quick weigh and pictures taken and it’s time to pack up, so close! At 11lb it’s my biggest Zander this winter, phew. As you can see the difference between success and failure is very, very slim.

What a chunk, Andy’s well pleased with this Rutland beauty

I would like to wish you all a Merry Christmas and Tight Lines in the 2016!