WEIRWOOD IS NO LONGER A TROUT FISHERY BUT IS OPEN FOR COARSE FISHING. - June 2015 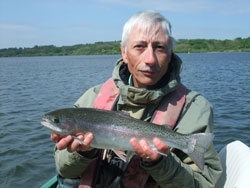 Weirwood reopened for trout fishing back in 2010 after a layoff of several years, I had heard mixed reports about the fishing, everyone I’d spoken to was interested in visiting the water but was waiting to hear on the’ jungle telegraph’ how it was fishing before they invested their time and money on a trip, so James Gardner and I “bit the bullet” and visited the fishery to find out for ourselves.

We arrived in late April, the warm spring had brought forward the hatches of midges and hawthorns so I was hoping for plenty of action “on the top” to my dry flies. The wind was blowing across the dam angling into the south ‘lodge’ bank where, while we were loading our boat we saw plenty of signs of fish activity this made us both eager to get started. We motored up wind to the north shore and started our drift right in the corner of the dam, the calm water here should hold fish if they were indeed “up”.  I missed two fish as I repositioned my flies at the start of our drift; James elected to fish a team of small un-weighted nymphs just in case it was too bright for the fish to rise confidently.

We made several short drifts from the dam working our way ever downwind towards the south bank and the ‘hot area’ we had seen earlier, two fish fell to my black ‘CDC’ hoppers, an exceptional early season fly which could be taken as a Hawthorne or an emerging midge, on our way James intercepted a fish that was mooching along the dam wall, this one falling to a diawl bach.

At last we started a drift that took us along the south bank, immediately James was getting short nips and tugs that he couldn’t connect with, it was interesting to note that the fish were stimulated by really fast retrieves with the flies skimming just under the surface, these fish were in a chasing mood, at this point I was still persisting with dries despite the early thin cloud cover having gone. 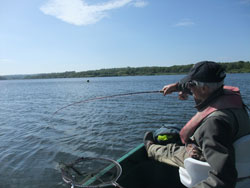 I could no longer resist and quickly changed my two flies over to an orange blob on the point with a small black nymph on the dropper. I angled my cast towards the bank then began a fast strip retrieve at the very last moment I swept the flies across the front of the boat where I could clearly see fish chasing both of my flies! This was extremely exciting and I did manage to catch several on these chasers “on the blob”, all the fish were in the 2.5 to 3lb bracket looking streamlined and all were fighting fit. James as usual was getting into the action as well but was still experiencing a frustrating amount of short takes.

There was one spot on our drift where there was a concentration of fish so we dropped anchor here to fish the area in a more subtle way, now James really started to bag a lot of fish while I managed nothing, I couldn’t even catch a cold!

After a fishless half hour for me meant we had to move, well I was driving the boat.

We anchored in the corner of the dam; we had spotted plenty of fish here but couldn’t drift this tight area being so close to the tower and the boat jetty.

I fancied a rest while I lunched, so on went an indicator attached to my leader just above my top dropper which was the dreaded orange blob, beneath were two superglue buzzers which I was confident would “do the business”, I cast slightly up wind allowing my flies to “dead drift” back towards the boat, well 5 fish in quick succession astounded both of us as they all fell to the ultra shallow blob!

James again was picking off the odd fish here and there and even had to try the indicator and blob combo with some success I might add, trout fishing can be very silly sometimes.

What were our impressions of Weirwood?
Well without a doubt the place is very well stocked with good numbers of fish being caught and returned this should see them becoming naturalised and tuning on to feeding naturally. Those anglers who have already discovered its potential have been keeping it to themselves and I can quite understand why but for the fishery to survive in these difficult times we all need to support it, owner Michael Evens has invested a lot of money in a new fleet of boats, engines and more importantly good quality hard fighting fish.

On our visit we were meet by fishery manager Ben Ormonde and his charming assistant Abbey they both made us very welcome and furnished us with as much information as possible to ensure we had an enjoyable day. 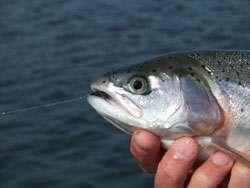 In conclusion I suggest you visit Weir Wood very soon before the “dog days of summer”, I also recommend you hire a boat to enjoy the fantastic sport on offer.

P.S. Since this article was published there has been a change in ownership, the new owners are Mike and Debbie Smith. Having briefly spoken to Mike he assures me that there will be several changes to the starting and finishing times and pricing will be more competitive in the future so check their web site for details.