A visit to a new fishery is always something I look forward to so when I first heard about Thornwood Springs near Epping Essex, I was intrigued.

On my visit I was accompanied by my son Adam and close friend Colin Cooper. We arrived one Sunday to be greeted by a cold blustery wind and persistent rain, now theres a novelty! Booking in with owner Peter Thurston, I got a brief rundown on the history of the waters and was surprised at how new the fishery was. The main lake is barely 3 years old but already the fly life is well established. The fact that for the previous 25 years only pigs and horses had grazed the land meaning no insecticides or other chemical had ever been used here. Peter assured me that if I returned in the spring I would see good hatches of Mayfly, Damsels, Buzzers, Sedges and Hawthorn.

Eager to get started we all headed for the main lake, a long narrow water approx 3 acres in size with an island about 2/3 the way down its length. Colin and I headed in that direction, the wind was piling down there and I strongly suspected this would be the best area to concentrate on as early season trout have a tendency to be at the bottom end of the wind. Adam elected for comfort and stayed at the car park end with the wind off his back! Little did I know he was to catch the first fish on only his second cast, not bad for a carp angler who only occasionally fly fishes! Wasnt I going to be reminded of this in the weeks to come! 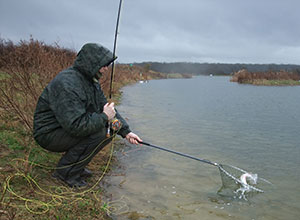 Wrapped up in several layers of warm clothing and wearing gloves I started casting across the wind just downwind of the island, I had attached a 15 fluorocarbon leader with a Gold Head Montana. The first few casts produced nothing but weed as my fly swept into the margins. The water clarity was surprisingly good and despite the poor light I did spot two dark shapes patrolling the margins which I was told would almost certainly be some of the resident Browns. As I pondered what to do next I was surprised to see a trout roll on the surface. I waited to make sure it wasnt a Coot diving, Ive been fooled many times over the years but yes it happened again, these fish were much higher in the water than Id expected so a change of tactics was required. Off came the Montana, I cut 3 off my leader to reduce the depth my fly could reach and I also selected an unweighted Black Daiwl Bach. I proceeded to cast across the wind as before but this time I started a very slow figure eight retrieve immediately just keeping contact with my fly while preventing too much bow forming in my floating fly line. Within a few minutes I had that all important first fish of the day. With any luck I now had the depth and speed sorted so it was only a matter of keeping on doing the same thing. I quickly informed Colin what Id discovered and he also changed tactics to allow his fly to fish higher up in the water column. Adam had now joined us and as I greeted him with my smug smile he told me hed already caught so the ol man wasnt the first to wet his net! After another 15 minutes I fancied a look at the new lake, Peter had told me this lake had only filled last year and was still in the process of grassing over, it did look a little bare but it was still only February. I worked my way around this larger lake, it also has an island and some very interesting features that Peter had designed to give the water more charter. The wind was swirling across the lake, from one side to the other; I positioned myself so I could cast across the wind and let my line swing into the downwind margin. I caught two fish using this tactic. The most enjoyable one was in fact my largest of the day which intercepted my fly right at the end of my retrieve on the hang, the Rainbow was exactly as Peter had predicted a fully finned bar of silver. 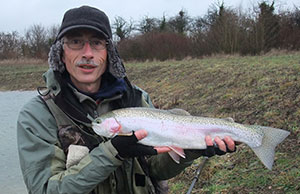 In conclusion, Thornwood is definitely worth a visit. Peters priority is to create a quality fishery stocked with rainbows and browns to double figures. The mixture of sand, gravel and chalk here means good quality water and abundant fly life the lakes are crystal clear so stalking is also a possibility. Its always nice to have another fly fishery on the scene and this one has the potential once its matured to become a haven for both fly life and fly anglers.