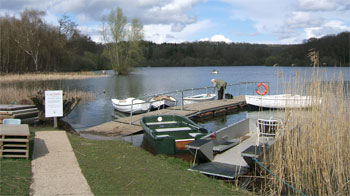 If you go down in the woods in May your sure of a big surprise because hidden there is the most beautiful trout fishery I know Powdermill Reservoir.

Every year anglers flock to Powdermill in May in the hope of being there when the Mayfly are hatching and the trout are up, well this year after several near misses I was there to witness the spectacle and enjoy the best Mayfly fishing Ive experienced.

A brief chat with Vic Partridge the bailiff to glean information on the previous days results and successful areas saw Matt Boast and I quickly loading our boat eager to start fishing.

We started our first drift across the dam as we had seen signs of fish activity in the light ripple that was caused by the gentle breeze. We both started with two dries but quickly changed as on closer inspection we noticed the fish were taking just sub-surface I elected to fish a team of un-weighted nymphs which would allow me to hover my flies just above the fish while Matt choose to fish slightly deeper with a weighted Walkers Mayfly nymph on the point with two small flies on the droppers. 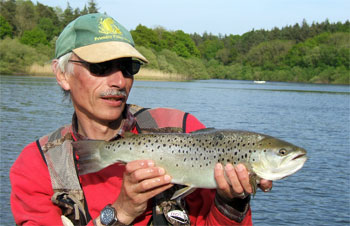 After two unsuccessful drifts we decided to anchor up by a large reed bed at the bottom of the wind as by now the sun had broken through and the only signs of fish were right in the edges of the weeds.

Matt was first into action with two plump rainbows on the point fly while I missed a couple of sharp takes I eventually joined in the action with first a small perch followed by a mini wild brown trout once Id adopted his method of fishing deeper.

A move into the west arm saw us witness what at first was a trickle of adult mayflies which quickly turned into a steady hatch, as the armada of flies drifted across the waters surface the occasional slurp could be heard as a trout engulfed its prize.

As the day continued increasing numbers of mayfly were emerging inducing the most reluctant trout to rise including the resident wild brown trout by drifting close to the abundant bushes that surround the waters edge we were able to target cruising fish that we observed as they worked the margins. 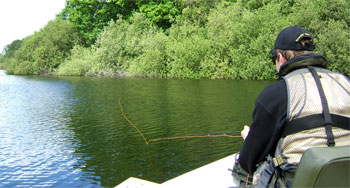 A Grey Wulff on the point and a Mosely May on the dropper were my successful offerings both these flies closely imitate the colour of the mayflies at Powdermill which range in colour from Iron Blue to Golden Olive. Its worth mentioning at this point that the species of mayfly here is Vulgata the Stillwater mayfly not Danica its paler relation often seen on the chalk streams across southern England hence the choice of these darker flies.

The day became a blur as fish after fish could be seen rising by now even in open water I caught my bag of fish which included 4 wild browns to 3lb, all released as is the fishery rule, Matt also caught his full quota of rainbows, what a delightful day we had and one I will savour for the rest of the season.


And now for the technical bit

The mayflies are an order (Ephemeroptera) of insects that grow up in fresh water, and live very briefly as adults, as little as a few hours but more typically a day or two. About 2,500 species in 23 families are known. Other names for these insects include dayfly and shadfly. 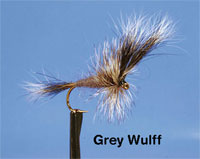 The nymphs live on the bottom of lakes and streams, usually under rocks, clinging to vegetation or digging in silt or mud. Most species are vegetarian, with some types being predators. The nymph stage may last from several months to as much as several years, with a number of molts along the way. Mayfly nymphs are distinctive in having external pairs of gills along the abdomen, as well as 2-3 long cerci at the end, giving them a bit of a frilly appearance. In the last aquatic stage, small wings are visible, a feature unique to this order.

The adult's mayflies will generally emerge at dusk although on occasions they can be seen at dawn too, its one purpose is to reproduce; the mouthparts are useless, and the digestive system filled with air. The adults are medium to large, shiny, slender insects with two pairs of fragile, transparent, many-veined wings, with the forewings much larger than the hind wings and two or three long threadlike tails.

The males' eyes are usually large, and the front legs long, used to grasp females and often held in front when resting. In some species, all legs aside from the males' front legs are useless, and adults' entire lives are spent in flight. The mayfly emerge by the thousands from streams, ponds, and lakes at twilight in the early spring; the males form large mating swarms and when a female flies into the swarm she is seized by a male and the two depart to mate.

It often happens that all the mayflies in a population mature at once, and for a day or two in the springtime, mayflies will be everywhere, dancing around each other in large groups, or resting on every available surface.

Both immature and adult mayflies are an important part of the food chain, particularly for carnivorous fish like trout.