Winter fly fishing has become more and more popular on the small Stillwater scene over the last decade. fact is trout much prefer the cold water conditions of winter to the warm water of summer, so its not surprising to learn that many small fisheries are busier at this time of year than in July or August.

The only thing the intrepid fly angler needs to consider when winter trouting is appropriate warm clothing and essentially wearing gloves that will allow you the ability to "feel" and retrieve the fly line without being too awkward. I finally summoned up the enthusiasm to go fly fishing the other Wednesday despite a vicious North Westerly wind that coupled with the near zero temperature saw most sane people staying indoors by the fire. 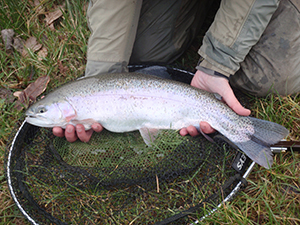 Our visit, I was in the good company of James Gardner, was to Hazel Copse Nr Horsham on arrival we were greeted by the affable Wilf who filled us in on the latest catches and tactics. The bitter conditions saw James and I tackling up with two different approaches. I rigged a floating line with a short 10 fluorocarbon leader my trusty "Hot Head" Damsel on the point with a Black, Red Holographic Ribbed Diawl Bach on the dropper positioned about 4' from the point a little closer than normal. I didnt want my flies to be dragging along the bottom as this was where I expected the fish to be and I was also expecting to be angling my casts along the bank to keep my flies close to the margins throughout the retrieve. The short leader creates a stepper angle between fly line and leader so the point fly trips over the bottom rather than dragging into it. James tackled up with an Intermediate line a far more practical approach in my opionion this would give him the ability to retrieve at a variety of speeds without his flies riding up in the water column. I thought his choice was more likely to be the successful one but I much prefer to fish a floating line whenever possible.

Well did we catch? We both wimped out to start with choosing to fish the sheltered "up wind" bank on lake 2 as this would be "two coats warmer" than downwind in the teeth of the chilling breeze. After an unproductive first half hour of slowly creeping my flies back along the bottom I noticed a couple of rises in the light ripple right at the extent of my casting range. I removed my weighted point fly and switched to an unweighted Cormorant. Within a couple of casts Id missed a take and hooked another before it slipped the hook in the margins, this sharpened my concentration, there were fish to be caught and they were much higher in the water and more active than either James or I had expected, in fact James had now changed to a floating line too. 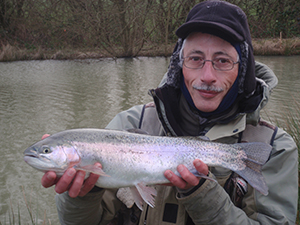 A couple of fish boosted my confidence enormously and now I was on the move down the bank towards the island that offered a little shelter from the strengthening wind it also funnelled the wind along the bank and although difficult I could "backcast" across the wind here and two more fish rewarded my effort. James by now had also moved down the bank on the opposite side and had located a lot of fish, but hooking them was a different matter, on the bottom end of the wind. Being left handed the wind was making it very difficult for James to reach these fish so we swapped sides which made casting so much easier for us both.

I was now able to cast across the wind, I straighten my line and just maintained tension and hold my flies up in the water, a very slow retrieve enabled me to keep in contact as they drifted this proved to be the winning combination. I caught fish after fish in this manner, I was very impressed by the condition of the Rainbows and each one fought like a tiger! I had not expected so much action on this trip but Wilf had told us that his regular anglers were catching anything up to 15 fish a day which is what I caught, James switched between retrieving nymphs in a similar style to myself or suspending buzzers under a bung. Both methods produced fish in fact the bung fished in the margins was deadly and he finished with approx 20 fish. What a fantastic result on an otherwise miserable day we both opted for the catch and release ticket which was incredible value.