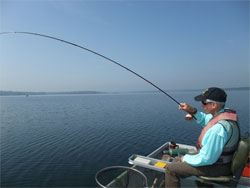 Over the last few seasons Hanningfield has experienced a decline in its attendances by fly fisherman so the management took the bold decision to opened its doors to "any method" fishing to run alongside fly fishing, this got a rather negative response from the fly fishing fraternity which is a shame as their intention was to find a formula in which they could continue to run a trout fishery at this once popular venue.

A chance visit last season [2010] saw James Gardner and I fishing a far busier water than we had expected with about half the boats spinning and plugging with ultra light tackle while the others including ourselves were fly fishing, on the day we caught enough quality fish to make us wonder why we had waited so long to revisit the water, we had often fished Hanningfield in the past.

On this occasion we caught fish high in the water on the ‘washing line’ method while the spinning boats were drifting amongst us, in no way did their activities detract from our own in fact I was interested to see how our results measured up to theirs, overall I think we kept catching far later into the day when the spinning appeared to be less successful. We enjoyed our day so much that we decided that we would return the following spring.

We arrived early enough to be out on the water while there was still a little haze over the lake, this subdued the harsh light that was forecast for the day ahead, blue skies bright sun reaching 20 degrees ‘C’ not the best trout fishing conditions when you also factor in the ultra clear water clarity, you could see the bottom in at least 12’ and rapidly rising water temperatures, but I fancied a change as I’d fished several of my local waters already, besides we had unfinished business at Hanningfield. 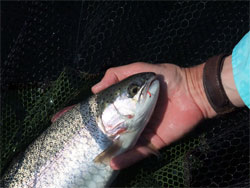 The fishery staff were very helpful and suggested that we fish a Di3 or Di5 as the trout were 15’ down, this was a surprise as from past experience I knew that Daphnia were a major part of the trout’s diet and the Daphnia on Bewl and Arlington were high in the water and so were the trout, despite the unseasonably good warm settled weather, suggested areas were Hall Point, Inlet Bay, Middlemead and Boundary Bay, and to "keep well out from the banks".

We motored to Inlet Bay an area we were familiar with and started our first drift although with so little wind we didn’t bother with the drogue. James rigged a Di5 with 2 Boobies with a Blob in between, a successful tactic I’d been shown by a boat partner the previous week, while I approached it from a completely different angle choosing a floating line with a 5’ intermediate sinking tip, 14’ fluorocarbon leader and a team of 3 superglue Buzzers on heavy gauge grub hooks.

James and I often choose different tactics at the start of a day this usually sees us finding the successful method very quickly and so it turned out. I made a long cast straight in front of the boat straightened my leader then started to ‘countdown’ my flies before starting the retrieve, its important to count your flies down in an effort to establish the depth the trout are feeding at, I counted 20 seconds then started my very slow figure of eight retrieve with the occasional jerky twitch followed by a pause, resuming the figure eight, second cast and I have a sharp take as a trout pounces on my point fly, a fluorescent orange buzzer. Within a few minutes James has a fish so honours are even at this stage, later in the same drift I have another this time on the middle dropper a black buzzer with holographic cheeks. Next drift another fish falls to the orange buzzer so it looks like we’ve found the fish and the method when suddenly the wind freshens and changes direction, we start a new drift very close to the dam adjacent to the inflow and deploy the drogue, there are no bank anglers present so we’re not encroaching on their space, another two fish to the buzzer confirms I’m on "the method" so James quickly changes lines and flies, he stuck with the sinking line approach until we were sure that the first couple of fish were not flukes. 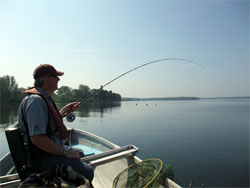 On our visit there were several other boats out, the mix was 2/3 any method 1/3 fly, the decision to open for any method fishing has brought a new younger bunch of anglers, who would not have visited the fishery in the past for whatever reason, these guys are not fly anglers yet, I say yet as I noticed that several of the boats had both fly and spinning tackle aboard, the future of the water is uncertain but I for one will be returning soon the quality and quantity of fish and the abundant fly life make it still a very interesting and enjoyable water to fish, I urge everyone whether fly or any method to support this fishery or lose it forever.