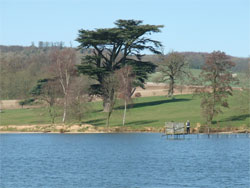 Set in a working farm the Eastwell Park Trout fishery is hidden from the frenzy of everyday life, as you settle into its slower pace of life you begin to notice the big, open surroundings of the parkland, its a real privilege to just be able to enter this lost world right in the heart of East Kent so close to Ashford and yet so far from its bustling centre.

On my previous visits Ive found that the fish, although initially drawn to the attractor style Damsels and other marabou tailed flies, quickly shy off these large offerings with solid takes becoming a rarity and short sharp stabs, which are almost impossible to hit, becoming the norm.

Im pretty sure that the popularity of catch and release operated at the fishery has educated the resident trout to some degree which is no bad thing for the more determined angler, with the fish now spending so much more time in the water we see them naturalising and feeding on the abundant fly life present, for those who have studied the stomach contents of their catches over the years will have noticed how very small most of these food items are. 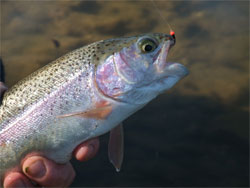 With this in mind Ive found it necessary to use small sparsely dressed flies such as Buzzers, Daiwl Bachs, Crunchers or any other slim un-weighted suggestive patterns in sizes 12 or smaller. Long fluorocarbon leaders of at least 15 are often needed to reach the fish in the deep water hot spot off the dam, drifting these small flies around on the wind has been the successful tactic on my last two visits even employing the controversial sight indicator when the fish stopped responding to a slow figure eight retrieve.

Fortunately its not always necessary to fish in this style, for those who visit from May onwards you can expect an evening rise so make sure you have a selection of small parachute dries in sizes 14s and smaller, and have some tapered co-polymer leaders in 4x diameter about 5-6lb breaking strain.

In summery Eastwell Park is developing into a very special water where anglers can enjoy fishing for trout that have become truly wild creatures and where imitations of their diet score more often than the more gaudy creations often employed on other stillwaters.