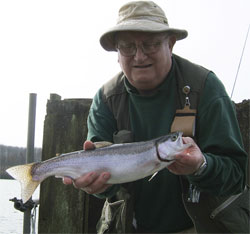 After a winter spent indoors suffering the cold weather I finally ventured out for my first fishing trip of the new trout season.

With the sudden improvement in the weather I was really looking forward to my return visit to Eastwell Park I was very impressed with the fishery last year. Brian Harris and I were greeted by Richard Aylott, the fishery manager, after a cordial chat Richard informed us of a few improvements that had taken place since our last visit.

The estate has cleared the bank along the dam which was previously out of bounds this has increased the bank space significantly and more importantly it gives access to deep water a real advantage once the weed growth extends past the shallow margins that fringe the rest of the lake.

The Stock fish are again of top quality fully finned rainbows and browns from a local source, this removes the stress of long journeys and allows for trickle stocking, in addition to these are a few very large grown on brown and rainbow trout in excess of 10lbs, this adds an extra edge to your fishing, you never know exactly what that the next pull could be!

Our day started with the wind blowing strongly from the south west across the dam onto the boathouse bank, I positioned myself on one of the strategically positioned piers that juts out into the lake; this gave me access to the deep water towards the dam end of the lake. My plan was to cast across the wind and slowly retrieving my flies close to but just off bottom, the first few casts were met with no interest so I allowed my flies to sink a little deeper, using the countdown method, I slowed my figure eight retrieve even more so that I was just in contact with the flies as they swung on the wind, on my second cast after this adjustment my fly was stopped on its upward journey to the surface, fish on!

My Diawl Bach dropper fly was taken on the lift a very subtle take that I doubt I would have felt without my non stretch fly line, takes were few and far between for the first couple of hours until the sunshine warmed the surface layer of water, by late morning the occasional fish broke surface which made me think that a shallower retrieve might be a good idea, sure enough the next cast was not allowed to sink as deep as previously and a constant figure eight retrieve was immediately ceased on by a hard fighting rainbow. It appeared to me that the build up of warm surface water had piled up on the downwind bank which in turn had warmed the trout hence their greater activity later in the day.

The fish we caught was mostly around 2lbs in weight although other anglers did catch larger but what cannot be overstated was their condition, bright bars of silver with a flash of magenta and fully fined into the bargain, whats more the fish we spooned was full to the brim with daphnia its no wonder these fish were fighting so hard!

In summary if youre looking for a picturesque quiet place to fish, with trout that have gone native feeding on naturals then I suggest you visit Eastwell Park soon!