As Ive mentioned before I get very excited about the prospect of fishing a new venue so my latest visit to Decoy Lake near Peasmarsh was hastily arranged. As I drove just 17 miles from my back door, how is it possible Id not heard of this fishery until recently? In fact I must have driven past their entrance many times before on my way to Blackwall bridge on the Rother on one of my many piking trips.

As I approached the lake I got my first glimpse of the water, some 9 acres in size, square in shape a jungle of trees and bushes down one side the other three sides are well manicured allowing ample casting room 2 islands added extra features. First impressions are always important and to say I was the impressed is an understatement. I was informed later that the lake averages 12 with 22 in places.

One angler was already fishing when I arrived so I had a quick chat to see how he was doing and to glean some information about the lake and what to use. He informed me hed had one fish on a Montana and was now using a Wooly Bugger, another weighted nymph. He also informed me hed had a couple of short takes but nothing for the last half hour. 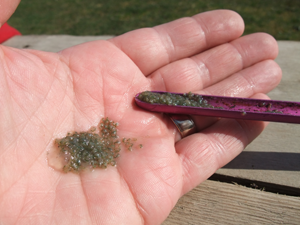 Things looked promising despite the cloudless blue sky and accompanying bright sunshine. I started at off with my go to fly of the moment a Hot Head Damsel, as Ive mentioned before depending on how fast I retrieve this fly it can either be a bottom crawling nymph or at speed an olive lure, the weighted head provides depth and also stops it riding up in the water. The hot orange head I believe is a very important element because its very attractive if Daphnia are present.


For my first cast I counted to twenty before starting my retrieve, well that was the plan but before I could straighten my line the leader cut down through the surface as a fish took my fly on the drop. I played it half way in before my line fell slack as it slipped the barbless hook, you have to fish barbless or crushed barb flies at Decoy. Several casts later and I get another chance this time it stays on and a clean Rainbow graces my net. Once dispatched I quickly spooned it, confirming my choice of fly was correct, the spoon was overflowing with Daphnia. Under the prevailing conditions the clouds of daphnia would stay deep, Daphnia is light sensitive staying deep in bright light and lifting up in overcast conditions, so down and dirty it was going to be today.

After a further ½ hour I decided to explore, my fishing companion had left having caught his morning brace of Rainbows, both Rainbows and Browns are stocked from two pounds upwards. So now I had the whole place to myself! I worked my way along the adjacent bank the water clarity, being feed by three springs, was very good allowing me to get an idea of the depths. I was looking for the deepest water I could find within my casting range, the bright light was going to keep the fish down today.

A slight breeze had picked up and it was pushing into the far bank, as I approached a reed bed in one corner I spotted a slight disturbance in the waters surface suggesting fish so I waited to see what was causing this, very soon the culprit was spotted a common carp about 6lbs came into view, later I was to see several more carp, all commons. Finally I was on the far bank systematically trying each opening, a cast along the margins produces two very short sharp plucks that didnt result in a proper take but encouraging all the same. Id not had any action for maybe an hour as I worked my around. Finally I found what I was looking for, in the furthest corner of the lake there was a stream inlet and deep water within 10 yards of the bank. The drop off was clearly visible and moreover the light breeze was into my face this should drift any waterborne food into the margins, good theory but were the fish here? A solid take confirmed my hunch as another hard fighting Rainbow was gratefully netted. Quickly dispatched and spooned, revealing even more daphnia, I was sure Id worked out the pattern of depth, speed and fly for today. Another lost fish and two more short sharp takes missed and it was lunch time. Having rested the area I was confident for some more action in the afternoon. First cast Im in again but somethings different the fish was under control when suddenly it shoots off and jumps close to the overhanging bushes, then its over and I net another plump Rainbow, once spooned its the same again. As I draw my fly line through the rod ready to recast I notice Im missing my dropper magenta Diawl Bach so thats what happened two fish at once!

Although I only fished the main lake there is also a spring feed Specimen Lake of one and a half acres, stocked with Rainbows to seventeen pounds! The Spring Lake is catch and release so barbless and crushed barbed hooks are a must.

Decoy Lake has kept out of the limelight for a good reason, they want to preserve the special atmosphere they have here. Please respect the countryside, this is a working estate, its a privilege to be able to fish such a special place so please enjoy this chance and leave no trace youve been there.

My first visit to Decoy has revealed a real gem of a water, so close to home its unbelievable. I will return sooner than I expected, they get a good Mayfly hatch and you know I love dry fly fishing.