A spur of the moment decision saw James Gardner and I paying a visit to Chigborough Fisheries in Maldon, Essex. We had been aware of the fishery for some time but had never managed to get around to going . However this years mild early spring weather had us itching to wet a line and encouraged us to give it a try.

On arrival we were greeted by Dee, the fishery warden, who gave us a quick run down on the layout and ticket options. There are eight lakes at Chigborough totalling 53 acres, some catering for coarse fishing, but it was the trout lakes that interested us. We elected to fish the 'Home Water' as the water was much clearer than 'Rook Hall', the other large trout lake, which was experiencing an algae bloom. 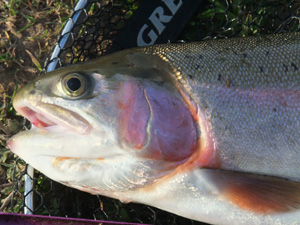 'Home water' was crystal clear so we were confident that finding fish would be much easier than usual. We started on the far bank opposite the lodge where a light breeze was pushing into the corner. James being left handed found the right to left wind to his liking. Unfortunately for me, being right handed, I found it quite difficult so I quickly moved to a casting platform further up the bank where there was a little more shelter.

The clear water had encouraged abundant weed growth making it necessary to adjust my original fly and leader set up. I'd started off with a 15' fluorocarbon leader with a weighted Hot Head Damsel on the point and a Hare's Ear pupae on my single dropper. I immediately found it necessary to retrieve faster than I would have liked and even then I was still picking up weed. First change saw an un-weighted Olive McKay replacing the Damsel nymph and 2' was cut off my leader, this giving me a little more speed control. Despite this I was still struggling to fish as I wanted. 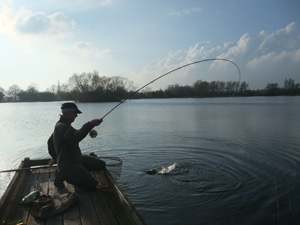 James came and found me as he'd already opened his account, no change there then, with several rainbows on the same Damsel nymph I'd just taken off! There was a little more depth in the corner, as well as a lot of trout that were rising every time cloud cover appeared. A long cast across the wind was necessary to reach these fish which I was finding difficult. After another frustrating half an hour I left James to his pod of fish which I had now spooked.

I mooched along to the opposite side of the lake, which would make for easier casting for me, hoping to find some signs of fish. As I approached some jetties I saw what I was looking for. All along the bank on the upwind side of the ripple there were fishing rising! Nigel Angus, the local angling coach, invited me onto the platform he was vacating and I eagerly accepted. He'd been catching on a combination of wet Daddies and Diawl Bachs. Casting here was so much easier in the shelter but I had to be carefully of my back cast due to the close proximately of the trees and bushes behind me. In fact I got rather excited trying to cover a rising fish and promptly put my team of flies up a tree, dow! 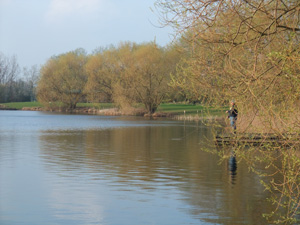 A new shorter leader, about a rod length with just a single fly was my new set up. A size 12 Daiwl Bach trickled slowly back towards the bank just sub-surface produced two fish almost immediately, but even more fish now seemed to be rising. Disaster, my dry flies were in the car and James had the keys! I franticly searched my fly boxes for inspiration and found a Dabbler, an Irish pattern that would suit my purpose. A sparse application of 'Gink' to its head and hackles created an emerger pattern and first cast bingo "fish on", my first fish of the year on a dry!

A dash to the car and I had my box of dries. I selected an Olive Shuttlecock as there were olive buzzers hatching everywhere. Once again first cast to the edge of the ripple saw a beautiful head and tail rise and my fly vanishes and afish hooked, what bliss! As quick as it started it stopped! Or should I say the flies stopped hatching. The fish were still there working the area but their swirls indicated they were intercepting nymphs just sub-surface, so a change back to small un-weighted nymphs was necessary.

You have to be adaptable at this time of year, I changed my leader set up to allow me to hoover my fly just under the surface without having to retrieve it. By replacing 8' of fluorocarbon with co-polymer nylon, which is less dense, and then adding a 2' fluorocarbon tippet I was now able to creep my skinny nymph's just sub-surface or switch to emergers if necessary. I caught fish steadily but the weird thing was that every time I changed flies I got a chance, but I never got a second take on any of the flies I had caught a fish on. I've experienced this before and cannot explain why this should happen but James was also finding the same. Flies that were successful for us were Hoppers, Crunchers, Diawl Bach's in various colours plus ultra slim Thread Buzzers, tied short.

We were both extremely impressed with the quality of the fish and the fishery. It was so nice to encounter fish that were feeding on naturals giving us the opportunity to fish with immative patterns, my favourite style. Both lakes are normally crystal clear. On 'Home Water' we could clearly see fish patrolling the margins. The lakes are regularly stocked with Brown and Rainbow trout. A visit to Chigborough is highly recommended. We cannot wait to return.