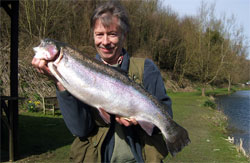 Hidden within walking distance of the town of Arundel in West Sussex and overlooked by the castle is the famous trout fishery ‘Chalk Springs’.

Established over 25 years ago Chalk Springs has been providing superb sport for those who can master its crystal clear waters. The fishery consists of four small lakes totalling 5 acres, stocked regularly with hard fighting Rainbow, Blue and Brown Trout.

The water quality provides a wealth of fly life in the form of Damsels, Olives, Buzzers, Shrimps, Mayfly and Sedge. With such an abundant food supply the fish have a chance to feed naturally and can often be observed flushing out nymphs as they flash on their sides amongst the weed.

On my recent visit I was accompanied by Colin Beddoe a very experience ‘big fish’ expert and Chalk Springs regular. 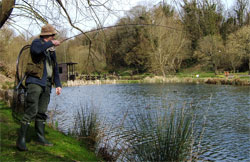 Colin specialises in targeting big fish whenever he fishes so on our trip together I followed him around the fishery as he gave me an insight into his approach for selecting and targeting the biggest fish he could find.

Our first stop was a quick look around the North lake, being the smallest of the lakes you could be forgiven for passing it by without casting a line, I know I have, but Colin assured me he has caught large Rainbows and Browns from here so the message is don’t take anything for granted. However, today a strong southerly wind was blowing up the valley; this made spotting fish on this blue tinged pool very difficult, so we quickly moved onto the West Lake.

When I’ve fished the West Lake most often I’ve cast from the dividing bank that separates it from the East Lake and so do most other anglers and that’s why Colin chose to fish the opposite side as he believes the bank side disturbance pushes the fish to the far side putting the fish very close to the bank right under his rod tip which makes spotting them so much easier as well as selecting the larger specimens.

After maybe half an hour Colin finally finds what he’s been looking for, a large double figure Rainbow lying deep down and stationary, first attempts see Colin trying several small weighted nymphs always cast slightly ahead of the fish allowing the fly to sink deep enough to be at the ‘right depth’ which is exactly the same depth as the fish. After a few changes of fly the trout although unflustered by our presence started to swim off before returning to its original position, in fact it started to patrol a regular circular route, each time it passed Colin had another fly ready and waiting its return, just as it swam past yet again a small nymph darted out from cover only to be intercepted up by the large Rainbow and Colin’s rod took on a satisfying curve as the fish powered off, game over. The fight was short and sweet and a relieved angler smiled into the camera holding his 11lb 4oz prize. 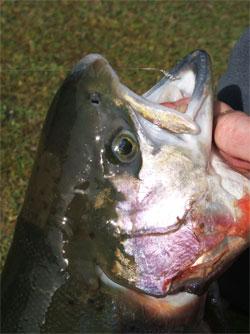 After a brief rest it was off to the South Lake again Colin carefully worked his way along the far side of the lake checking all the likely looking spots, close to the bank, under overhanging branches, near weed beds, all the time scanning the water for signs of fish, it was noticeable that the Brown’s were much easier to spot than the Rainbow’s due to their dark coloured backs, a fish was spotted very close to some tree roots this became the next target, a quick change of fly to a small drab coloured nymph was the downfall of a beautifully marked Brownie which tipped the scales at 5lb5oz, wow!

We continued our stroll around the fishery with more action to the same techniques on the West Lake, Colin really did a superb job; I learnt a lot and will try to use my new found knowledge on my next visit to Chalk Springs.

Top tips.
Most flies are fished either ‘on the drop’ or lifted ‘vertically’ up in front of a patrolling fish, this applies to both Browns and Rainbows. Blues will chase flies that are retrieved in a conventional manner and prefer flashier patterns, while Brown Trout show a distinct preference for dull coloured heavily weighted extremely small nymphs. Only reduce leader breaking strain when you are sure that its diameter, stiffness, is effecting your presentation.