Bewl Water is our largest and most popular trout fishery in the south east of England, 770 acres of water surrounded by woodland with unspoilt views across the adjoining farmland. Unlike many reservoirs I've fished Bewl has plenty of character with many inlets, bays and arms, each one of these can hold fish and should be explored as you search for the abundant trout.

The rainbows and browns have now been supplemented by the hard fighting 'blue' trout, a muscular strain of rainbows. The addition of these hard fighting blues has caused quite a stir with local anglers, long searing runs and dogged determined fights have left fisherman astonished by their raw power and everyone agrees the blues have added an exciting new dimension to the fishery.

The fishing this season has been spectacular with plenty of fish being caught by the large numbers of anglers who have been out in force enjoying both the exceptional weather and the superb sport. 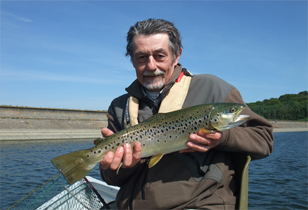 Bewl not only offers quality fish but monsters too as two lucky anglers have found out earlier this season catching grown on rainbows of 10lb 10oz caught by Henryk Pycz at the 'cages' and the other of 10lb 8oz by Tony Fox from the bank at the 'ferry point' in a competition!

Water quality and declining fly life has been a cause for concern over the past few seasons so this springs mild weather and the abundant hatches of hawthorn, daddy long legs and mayflies supplementing the buzzers and occasional sedge have given nymph fisherman much encouragement. Daphnia is again a main food along with huge numbers of small fish fry so do not ignore the possibility that trout are targeting either of these food sources.

For anyone venturing out on Bewl over the next few months my best advice is this, "from June onwards go afloat" and fish from a drifting boat, this searching technique is employed by all the consistently successful anglers, they realise that the fish are moved around the lake by the prevailing winds and weather so follow their lead, if you are unfamiliar with how to 'drift fish' contact the fishing lodge [01892-890352] and they can arrange for you to be 'guided' by one of their experience staff.

Location, the second dimensional.
Throughout the season, from May onwards, the trout are rarely deeper than 5' from the surface so despite the lack of rising fish "do not go too deep" unless the water temperature has forced the trout to seek cooler water, usually when the surface exceeds 20 degrees 'C', if in doubt employ the 'washing line' method of Booby on the point with two small nymphs such as Diawl Bach and Cruncher on the droppers and fish this team firstly on a floating line and them changing systematically from slow intermediate [0.5" per sec] to fast intermediate [1.5" per sec] to Di3 [3" per sec] and so on this will find the depth band that the trout are feeding within, do not change your team of flies, rather experiment with speed and styles of retrieve try strips, jerky, figure eight or even rolly polly, until you find the right combination for the day, remember "depth and speed" of retrieve are more important than the flies more often than not. 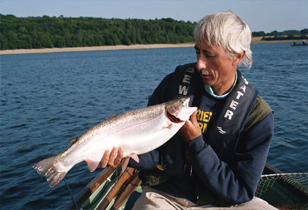 Location
Over the past few seasons we have seen a change in the behaviour of the trout at Bewl, in the past the fish would be seen 'tracking' up wind during the season so we would automatically start our drifts at the top of the wind drifting towards the approaching fish but this has changed and has to be understood if you are to maximise your opportunities on the water. I believe that with less fly life the trout are more dependant on Daphnia, on windy days this food source is pushed downwind towards the shore and so are the fish, on calmer days the clouds of Daphnia are more likely to be in open water.

In high summer the trout move to the basin area where the deepest water is, forced by the increasing water temperature, so that's where you will find them. In the autumn as the water cools the trout traditionally spread throughout the reservoir moving upwind but not any longer, they still more up in the water column but they stay out over the deep water no longer venturing up the arms or close to the bank, in my opinion they have lost the urge to track upwind with the lack of surface insects to stimulate this foraging instinct. So to catch fish at the 'back end' of the season you now need to stay out over deep water, this is mainly in the basin but I've also found fish suspended over deep water stream beds and channels in 'Bewl Straight' and between the 'Cages' and 'Bramble Point' in Hook Straight. 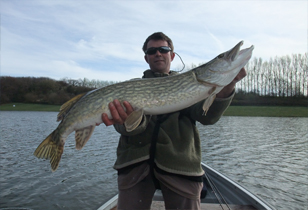 Pike Fly Fishing
For those looking for a new challenge you may wish to join the small but growing number of anglers 'pike fly fishing' this season. I have been out several times so far with mixed results although the last few weeks have seen my catch rate increase dramatically as the water visibility has improved, it's now possible to see the bottom 6' down. With this improvement my meagre catch of one fish in 3 visits has improved with a further 14 fish in my last 4 trips but still no doubles. Andy Perks however fared much better the other day when I meet him with two doubles to 17lb 8oz so a pattern is starting to emerge. Pike fly fishing is a new venture at Bewl, for guidance on appropriate tackle and regulations go to www.bewlwater.co.uk