Very rarely does something comes along unexpectedly that really excites me.

Well thats just what happened one Wednesday afternoon, Id recently returned from my annual trip to Spain fly fishing for Barbel! I know that sounds strange but thats another story for another time. Anyhow this Wednesday afternoon Im kicking my heels not sure whether I can muster enough enthusiasm to go fishing again after my wild Spanish adventure when I get a call from Howard McKenzie the manager at Bewl Water. Howard informs me that a major decision has been made regarding fishing methods at Bewl and could I take a brief look at the rules theyd drafted. In a nutshell the decision to turn Bewl over to any method Trout fishing, spinning and bait fishing, was one not taken lightly. With the economic situation as it is the future of Bewl Water as a Trout fishery depends on increasing the visitor numbers to an economic level.

With this springs welcome rainfall, all two and a half months of it had replenished Bewls water level but had seen a reduction of 20% in rod numbers. April and May are traditionally Bewls busiest months so with less anglers but the same amount of stock fish being released into the reservoir there has been a huge drain on resources so the decision had been made, but will it work? 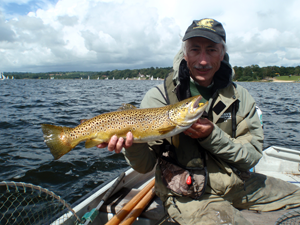 Well for those who dont know me let me tell you that my passion for predator fishing is only slightly overshadowed by my enthusiasm for fly fishing and lure fishing. Thursday July 12th the first day of the any method and Im at the lodge rearing to go the first angler to sample the action! Im slightly at a lose as what I should be fishing for? Trout Perch or Pike, I know the any method is aimed at getting more anglers on the water fishing for Trout but Im just as keen to sample the Perch and Pike fishing, what a dilemma.

After a brief spell at the cages I decide to fish along the submerged tree line where Id seen fry scattering from what I imagined were Perch. A few trial casts with spinners went untouched when another bust of activity signalled more predators on the prowl. A quick change to a small surface lure produced my first ever Perch off the surface, while walking the dog, this bazaar method sees the lure zigzagging from side to side as it swims back to the boat. Its all very exciting stuff, now can I catch a Trout on this lure? Well the answer so far is no but Im still trying, I cant see why it wont work. In the first three weeks since the any method started Ive fished six times! Ive got really excited by the prospect of mixing my species and my methods. August can be very difficult for fly fishing for Trout but buzz a spinner or a small plug/crankbait past their nose at the right depth and bingo its game on! Playing Trout on light spinning tackle, especially with braided non-stretch line is sensational it really is an experience I can thoroughly recommend.

Where? When? And How?


The three species all have slightly different tastes in water temperature and habitat which can at times overlap so dont take this advice too literally but this is what Ive found so far.

Casting small spinners around the flooded grass and bushes in depths up to 4 feet produces loads of Perch of all sizes; youre not likely to catch Trout here during the summer as the waters too warm. You may bump into the occasional Pike so I recommend you use a wire trace at all times, in fact even when targeting Trout I use a trace as you never know when old esox is going to put in an appearance. To catch Trout is fairly easy, well I have fished Bewl for over thirty years so if I dont know where to find them by now I never will. Generally fish shallow, sub 2 feet, over deep open water such as the Cages down towards the Dam and across the Basin to Chingley Woods. If we get any amount of hot weather the Trout will go deeper as they did at the end of July when we had to change to small crankbaits that dived to 10 feet. A few days later rain and wind had cooled the surface enough for the Trout to have risen to 5 feet so shallower crankbaits now became the hot lures. 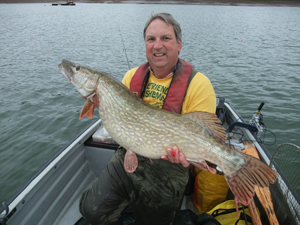 For Pike try the edges of shallow water dropping off into 10-15 close to where you are catching Perch. Ive not specifically targeted the Pike so far as I believe its not good for them to be caught too often during the summer months as they stress far too easily. If you do encounter Pike handle them with care and unhook them as quickly as possible while still in the water, if you loose your grip theyll safely slip back into the water with no damage done. Be prepared with long nose pliers and hook cutters so a quick release is possible. You will find the Pike in slightly deeper water as Ive already mentioned my most successful lures have been spoons and small soft plastic shads. Both lures give me the opportunity to pause and break the steady retrieve this triggers any following Pike or Perch into attack mode, so give your lure selection and methods some thought.

So what do I think of the any method option so far?


Ive fished as I said 6 times with 6 different boat partners in the first 3 weeks, each time weve had FUN and the day has passed far too quickly. Weve caught on average 6 Trout each, sometimes more, with at least 1 double figure Pike and maybe 20 Perch each. Ive learnt a lot about fishing smaller lures, I dont normally have the opportunity to use them on Trout reservoirs and Ive been surprised how often the largest Pike has fallen to the smallest lure. Trout love spinners! We caught most of our Trout on in-line spinners buzzed back at speed, they hit them so hard the rod buckles and bends as they thrash their heads from side to side and strip line off the clutch like the game fish we know they are. While out during my any method trips I have occasionally cast the fly and Ive noticed several other boats also mixing up their fishing methods. I think its very healthy to keep an open mind some days the fly will out fish the lure especially when the Trout are shallow, other times the lures will shine especially when its sunny and windy or the fish have just gone deep. Ive not mentioned bait fishing so far but it is allowed, you can fish single hook baits such as worm, maggot, sweet corn, bread etc so long as you do not loose feed any bait or use groundbait. This might sound strange if youve not fished for Trout before but these rules are to prevent interfering with the fly anglers sport. Trout are such aggressive feeders always on the lookout for food they will quickly find baits that are fished high in the water. I would recommend float fishing your baits at 2 feet depth and gradually going shallower until you contact fish. Recast frequently so your bait will be seen falling through the water. Cast across the wind, even apply Mucilin to make your line float, this helps pick up the surface drift so your bait covers more water. Although Ive not tried bait fishing so far I would expect bright coloured baits to be very successful. Baits such as sweet corn and all the very popular plastic fake baits, flavoured sweet corns, maggots and maize are worth trying. Do not forget to try flies!

Yes I know this seems strange but dont forget the tens of thousands of trout are caught each year from Bewl on flies fished through the top 2 feet, so why not on a float? Another fact that some fly anglers will cringe at me mentioning is the very successful indicator method which is a mini float controlling the depth the fly sinks to as well as indicating a take/bite. I myself caught an 8lb 15oz Rainbow by the cages this season while employing this system as I took a break from drift fishing.

Finally a few basic lures to get you started.

It all comes down to what depth and a what speed you think the fish will feed?

For shallow depths and a straight speedy retrieve I would chose in-line spinners such as Mepps and Kuusamo. To add some variation to the retrieve speeds pick some off-set spinners such as the Delalande Doctor or Lindy Big Fin these still have action as you pause on the drop. My final choice in this category is the humble soft plastic shad in combination with a jig/spinner arm attached. This combo can be buzzed at speed, has loads of action and flash, yet on the drop the blades pulse slowing the sink speed enough to let you fish in very shallow weedy water. 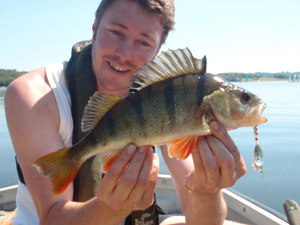 Its difficult to get in-line spinners to this depth while maintaining speed, the speed lifts them too shallow. Heavy 1-2oz off-sets like Esox Researchs Bump & Grind are good but still suffer when cranked at speed. Change to the Grinder which has the slimmer Willow blade, you get just as much flash without the lift. In my opinion this is where plugs or as the Americans call them crankbaits shine, depending on their size, shape and size of the lip you can crank them back at speed while driving them deeper. This is the opposite of sinking lures that lift at speed! Long thin baits wobble along their length while short fat ones have a much more aggressive tight swimming action. For Trout pick aggressive actions [Lovec Banana] while Pike prefer the wobble [Lovec Barbel].

So there we have it, the future of Bewl as a Trout fishery hangs in the balance. Its important that all fly anglers embrace this change and make everyone who comes welcome. The future of our Trout fishing depends on the success of this new venture.

Remember we are all visiting Bewl for the same reason, to relax, catch fish and have fun.

See you again on the water, tight lines
Andy Lush