Arlington in April, at last it’s time to get afloat on one of my favourite waters for dry fly fishing. I’ve enjoyed many fun days here with friends as we’ve targeted rising fish as they worked their way up-wind sipping emerging buzzers along the edges of wind lanes.

Casting to rising fish is a luxury not often enjoyed elsewhere but at Arlington the fish can be seen actively feeding on midges or wind-blown terrestrials, Hawthorns, Beetles, Ants or Daddies.

This is what I always hope for when I visit the reservoir but today it’s a “bluebird” sky, not a cloud to be seen anywhere. Todays “press day” is an event I look forward to each year, as much for the social side of catching up with old friends as it is for the splendid fishing.

After coffee and introductions it’s finally time to go fishing, today I’m paired with Paul Sharman an angling journalist and fly fishing blogger. I take us into the productive area known as “home bay” where the bulk of the early season fish are caught, I sometimes wonder if this is not self-fulfilling as this is where most anglers fish? 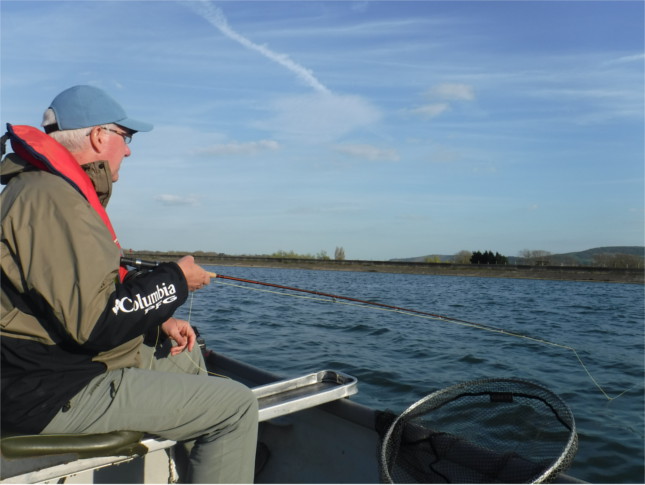 Paul Sharman watches his floating line for signs of a take

We anchor up and while Paul fishes a single fly on his floating line I opt for my usual early season set up of “midge tip” line with a team of three skinny nymphs, black UV Diawl Bach on the point, magenta JC Diawl Bach on the middle and a ginger pupae on the top dropper. After a quiet thirty minutes we decide that we need to find fish, so up comes the anchor and out goes the drogue, which allows us to gently drift across the entire bay. I cast my team ahead of the boat and slowly retrieve keeping pace with our drift. This allows my flies to drop through the water, at some point I’m hoping they’ll be at the right depth? Well the plan seems to work, as by lunch time I’ve had four takes and three fish. Paul has also had success with two fish in the bag, so we can both relax and enjoy the break. 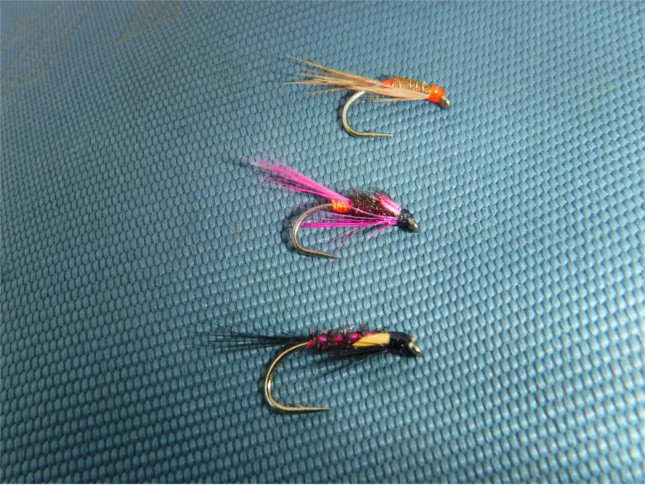 Interestingly all of my fish, when “spooned”, revealed no food at all, the bright sunlight had prevented any sort of hatch. The promised cloud cover for the afternoon did not materialise so after lunch we explored the downwind banks that had been so productive for the bank anglers in the morning. We gradually worked our way across the dam from the “Gabions” all the way across to “Duffers Corner” where we finally located some feeding fish!

I noticed, as our drifts got closer to “Duffers”, a collection of Mallards that were feeding on something in the surface. They were excitedly scurrying from side-to-side scooping up whatever they’d found? I also noticed this activity was isolated to an area shaded by tall trees, on the west bank. I could only imagine this shad had encouraged flies to hatch earlier than elsewhere on the reservoir, as nowhere else were there any birds feeding. I positioned our boat to drift into this corner and “bingo” as I straightened my line I felt that satisfying tension as a fish took my point fly, which was now a Hot Head Damsel nymph. I’d changed my point fly earlier to give me some movement as I started to retrieve my team a little faster, in an effort to “trigger” takes from the inactive fish. I’d already taken one fish on the Damsel and another on my top dropper, on “the hang”, since the change, so the strategy seemed to be working. This last fish, when spooned revealed one live “buzzer”, which confirmed a hatch was commencing in the shade. With my bag completed  it was time to head in, as we neared the jetty at the up-wind end of the reservoir, we spotted an occasional fish sipping “emergers” in the now calm water of “home bay”. 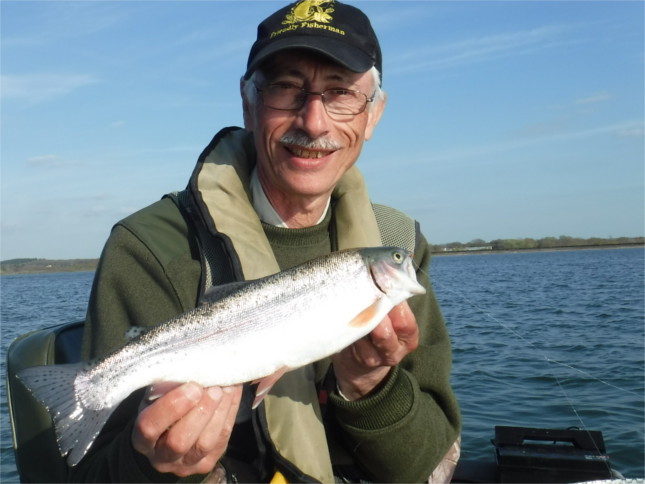 Andy’s happy with this fish that took "on the hang"

I enjoyed my challenging day at Arlington immensely and will be keeping a “weather eye” on the forecasts over the next few weeks; I intend to return shortly to sample the superb dry fly fishing it has to offer.

I got to thinking after my day at Arlington how often birds had influenced my decision making while fly fishing; it may surprise you how important it is to be observant?

Grebes that are actively diving, feeding, in numbers in one particular area indicate the presence of small food fish, which in turn attract predators including Trout.

Ducks gathered together and swimming up, or across the wind with their bills skimming through the surface have found a food source, possibly emerging flies or a fall of terrestrials, such as Ants, Beetles, Hawthorns or Crane flies [Daddies], again Trout will be feasting on the same. The sudden appearance of House Martins or Swallows indicates a hatch is in progress, even if you can’t see anything, the closer to the surface they swoop the more likely the Trout will be feeding, in or just sub-surface too. It never ceases to amaze me how Hobbies appearance always coincides with the hatch of Mayflies, goodness knows where they reside the rest of the year, but in May they are a “sure fire sign” that Mayflies are hatching! Seagulls excitedly wheeling and screeching out over open water, especially in the autumn, indicates “fry feeding”. The Trout or Perch are herding the fry into open water before piling into them stunning many as the do. The casualties drift towards the surface; most being picked off by the fish but the Seagulls nick a few too.

I hope this gives you some food for thought?

‘The Friendly Fisherman’ in Tunbridge Wells [TN1 2PS] is owned by Andy Lush.