Over the last few weeks with the weather staying so cool the trout fishing has been nothing short of exceptional. The Mayfly season kicked off in style on my favourite “bolt hole” Powdermill reservoir near Sedlescombe in East Sussex. 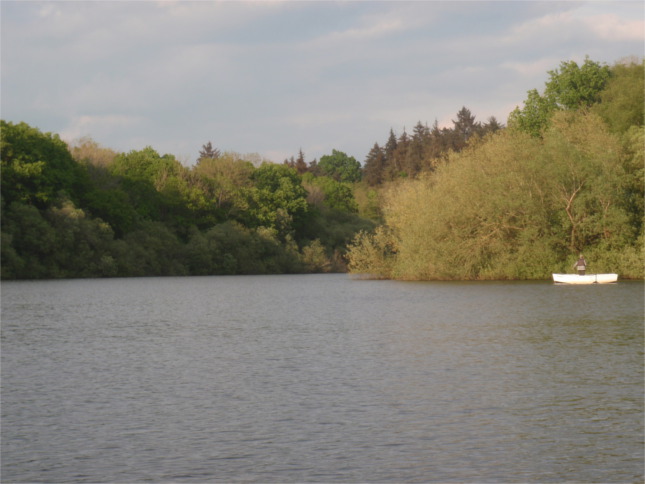 Sharing boats with friends is fun, taking them to this secluded water in Mayfly season is amazing.  Gilliaum Vermeulen  was my first guest, this was his first visit to the reservoir. To call Powdermill a reservoir could give you the wrong impression, it’s not a large featureless water, rather it’s a picturesque water surrounded by forest that has a certain charm about it that keeps me returning year after year. Very much like the Hobby’s, a small Falcon, that arrives exactly as the adult Mayflies begin to hatch, again a bit like me.

The sight of Mayflies fluttering across the surface adds to the excitement, as any moment a ferocious trout will pluck one of these hapless morsels off the surface. To say we were excited was an understatement, while tackling up we saw enough flies coming off to see me instantly put my nymphing outfit to one side and hurriedly set up my 10’ #4 dry fly rod. Two mayflies, a Golden Olive Wulff and a Mosely May were attached to my leader and off we went.

Quietly we motored up the West arm seeking the first rising fish of the day. Let the FUN begin, we both hooked fish almost immediately, as the morning progressed and the hatch intensified there were fish everywhere! We both became “headless chickens” for a while, being distracted as fish after fish splashed behind us or rose to the side, while at the same time our flies were being taken too!  We missed fish after fish for about an hour, but boy did we laugh at our incompetence! 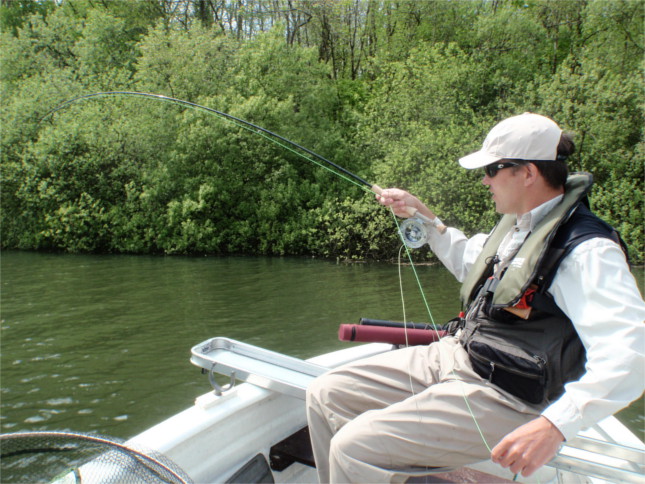 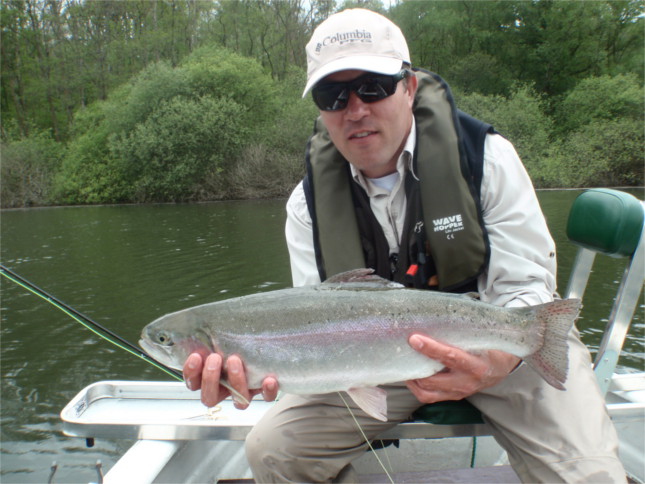 After we had a good talking to ourselves we put on our blinkers and concentrated, on only looking at our own flies, and guess what, we starting hooking the blighters again. And so another day quickly came to an end, all too, but I think this won’t be the last time Powdermill sees Gilliaum.

My next guest was my good friend and fellow “amigo” Mark Bryant who found his way, eventually, to Powdermill. The conditions were perfect, overcast skies and a gentle ripple, what’s more the Mayflies were hatching, at last, having been absent all morning. Mark loves his dry fly fishing and he wasn’t going to be disappointed today! Powdermill put on a show for him, when there was ripple there were fish to be seen and caught, when it went calm they disappeared. We experience a frustrating period mid-afternoon but eventually we put a bag together. After the hatch petered out we amused ourselves by catching Rudd that obligingly engulfed our mini parachute dries, Mark will be back too.

Having fished Farmoor 1 several times over the last year James Gardner and I decided to fish its neighbour F2 for the first time. As we arrived we were greeted with overcast skies, perfect for dry fly fishing and the water was crystal clear. We hurriedly tackled up, as I threaded the line through the rod rings I could see fish rising just off the back of the moored boats. “Where shall we start” James asked? “I think here will do” came my witty reply. So our first drift took us from the boat dock all the way down to the dam wall at the bottom end of the wind. I caught a couple on my CDC Hoppers and Shipman’s but to be honest this was not going to be the best method. 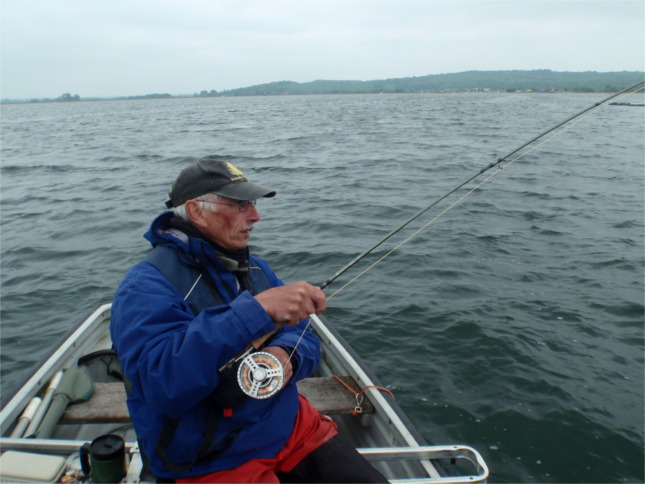 Andy hooks into a Farmoor Express 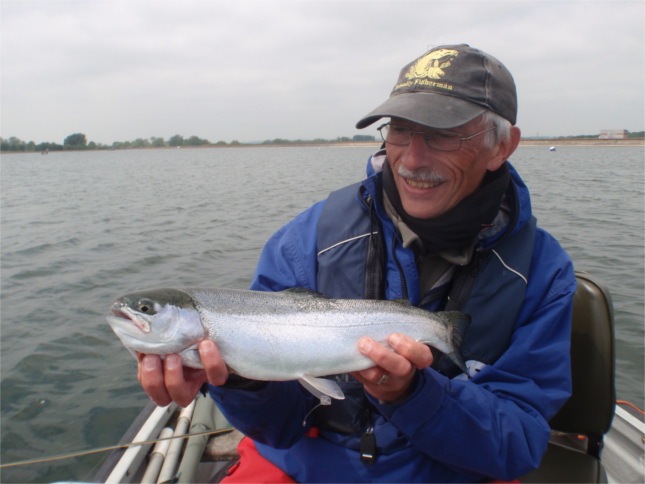 A large number of new stockies were swimming fairly fast, just sub-surface, tracking up-wind, so their window of vision was very small, making my dry flies almost invisible. This couldn’t be said about James team of flies! Despite changing his team around constantly during the day there was always at least one shockingly bright FAB Blob in either Fluorescent Orange or Fluorescent Pink in evidence. 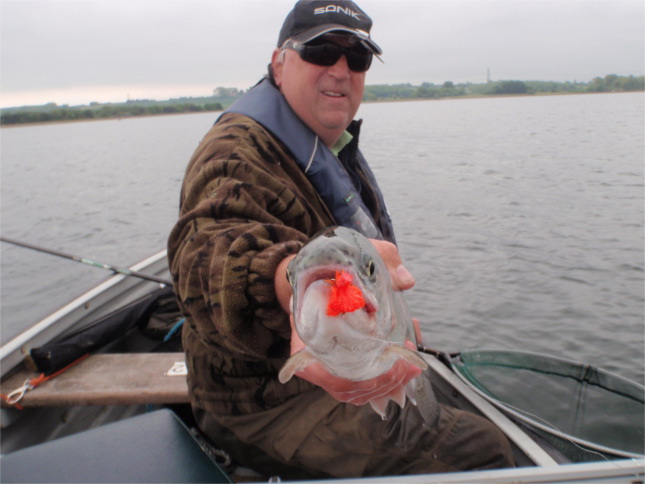 Throughout the day he caught fish after fish, so much so that to slow things down occasionally he would pick up his dry fly rod and nail a couple of fish before returning to the more successful Blobby team. 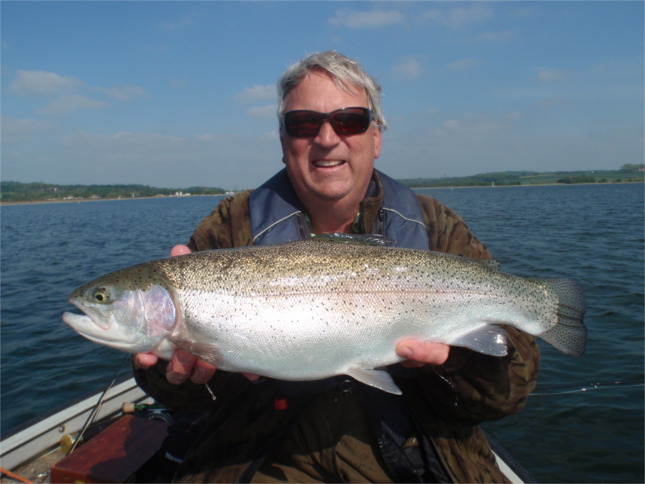 Another 6lb Farmoor monster for James

My catch rate improved once I put a Bob’s Beetle on, this foam backed fly allowed me to draw my flies through the surface, without drowning them. This tactic drew plenty of fish up to investigate my now static flies, I still managed to miss far too many, but it did bring me more offers than previously.  So there we have it, battered by James again!

Andy owns The Friendly Fisherman in Tunbridge Wells [TN1 2PS]. His shop, as you would expect, is full of the latest fly fishing and fly tying gear. With over 40 years’ fly fishing experience at home and abroad. Andy is always available to offer personal service and offer valuable advice.