Steve quietly steers the boat into the bay along the margins, the Minn-Kota's electric motor is hardly turning. The four floats have a good spread and the baits are working well, some grebes are fishing to my right. My eyes go back to the floats, one, two, three (float gone), Steve cuts the motor as the inside rod takes on a slight curve, and the baitrunner starts to sing. Taking the rod from the trolling rod rest, I release the pickup and line spills through my fingers. Steve winds the other rods up in seconds, my heart starts to beat faster, is it a lump or a jack? I wind down to the fish; the rod goes over as a heavy fish moves off pulling the boat around as it goes! Two minutes later a broad back breaks surface, and is drawn over the waiting net. Another good fish is gently lowered into the boat.

Andy asked me to write a small article on boat fishing for pike. I believe he's covered bottom bouncing, and the other more technical side elsewhere, so I will just go through some of the methods Steve Wells and I use.

Steve and I first started fishing together about four years ago, I won't bore you with the numbers of fish we've had in that time (yes I will) just to illustrate how good boat fishing can be. Steve and I have been fortunate enough to have had 82 twenties and 7 thirties! grace our nets in that short time. So if a whinger like Steve and a wrinkly like me can catch, you can too!

Float Trolling.
The tackle I use.
Rods - I make up 4, 2 x 10' 2 1/2lb test curve and 2 x 11' 2 1/4lb test curve, both sets of rods have cork handles. With cork, if a rod goes over the side it floats! [Rumour has it Bill paints his rod handles orange so he can retrieve them!]
Reels - Shimano Baitrunner 8000.
Line 15lb Big Game in "Solar" green, being highly visible this helps preventing tangles.
Floats - Different sizes of tube sliders, I usually make my own, but there are plenty of good ones on the market.
I make up 2 rods with big floats, the other 2 with medium, so I can change depth and sizes to suit the baits.

Terminal Tackle.
Traces - 20" of 28lb wire, 2 size 6 semi barbless trebles, I paint the bend of the barbed point with fluorescent or luminous paint to make hooking up baits in the half light easier, (I'm going blind in my old age). There is nothing worse than casting a bait off or checking a rod after an hours trolling only to find the bait gone. Also it makes the bait more visible to the pike resulting in more takes.

Location.
As with all fish, if you don't locate-you don't catch, its as simple as that. Using an echo sounder, it cuts out a lot of the work; its surprising how quickly you can map a water, even big waters in your head. Note features, shelves, drop offs, bait-fish, and most important of all "depth". Remember where you had runs from, use land marks for positioning. It soon becomes apparent, after a few sessions, that there are hot areas and a lot of barren water. So with a limited amount of time you can maximise your fishing to the productive areas. When trolling remember to alter the depth of the floats.

One hotspot can be 30' deep the next 8', with the information you have stored in your head the floats can be in and back out again in plenty of time before entering the next area. As you go through, just check with the sounder that you got the depth right. A lot of anglers go out, find the average depth, and then set their floats for the day. Don't forget when trolling the margins, with a distance of about 30' between inside rod to outside rod to set your floats accordingly.

Plotting Up.
There are times when the wind becomes too strong for trolling and you have to anchor (or plot up, as we say). There are also days when it can actually out fish the troll. I'll give you an instance, Steve and I decided to take a boat out each, the plan being with two boats we would find the fish quicker. The weather was perfect for trolling; hardly any wind at all, in fact a day all boat anglers dream of. As we slowly trolled through the first productive area we both had a take instantaneously resulting in 2 nice doubles. Three more trolls through the area brings no response, I decide to move on, Steve's found some bait-fish on the sounder and is going to plot up on them for a while. I carry on trolling down the reservoir, after about two hours, I've had 4 more doubles up to 18 1/2lb and 3 smaller fish. 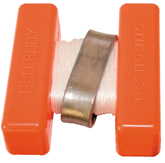 What a brilliant day I'm having, I think, as I notice Steve's boat heading towards me. "How's it going Steve" I shout, then I see that silly grin on his face, always a bad sign. O'er I've just had 6 big doubles, and 3 twenties, I've got the twenties sacked up, come and do the photos. So if you find a concentration of bait-fish, it sometimes pays to plot up on them. Using the knowledge you have gained from your fish finder, anchor up wind of your chosen area at the deepest point. If you have just come off the troll, its important when setting the depth of the floats to reposition the hooks in the baits. They work 100% better when hooked dorsal and flank. Now with the wind behind you, and a greased line, let your baits drift into the hotspot. When the floats start to drag, shallow them up a foot and run them out again, until all the area has been covered.

Depth.
Back on the depth again, its surprising how wrong you can get it when fishing deep water. You check your sounder, 32' you start to count the feet off, as you slide your stop knot up the line, 9 times out of 10 you will be several feet out either way. I don't take chances, I use a 3oz lead with a thick elastic band through it, even with a bait on it I can stick a barb into the band and set the float 6% off the bottom, it can make all the difference.

Secret Weapon.
Just to finish, how's this for a boat accessory, when Steve and I first started fishing together the waters we were fishing at the time, 90% of the boats would charge down to the known hotspot. It was just like the North Bank at Llandegfedd, the first 6 boats would cover the hotspot, and the rest would scour around the outside waiting to pounce. We do take it all too seriously at times, don't we; after all fishing is supposed to be FUN!

Anyway, there we were all anchored up when the wind gets up, restricting where we could put the baits. Steve gets out our secret weapon, and launches a radio controlled boat, over the side, and proceeds to put our baits all over the place. The looks on the other anglers faces, I nearly fell out of the boat laughing. Luckily I didn't as it was only after a recent trip to Southern Ireland that the need for life jackets was brought home to us by the most severe weather. So if you do fancy doing a bit of this boat fishing lark, pop into Andys or give him a ring, he will be only too pleased to get you started. After all he's a tackle dealer who has been there successfully and done it, so get afloat in a boat, and enjoy.