Jerkbaits, what you need to know by Derek MacDonald 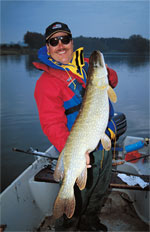 In layman’s terms a Jerkbait is a lump of wood or plastic, shaped into the desired proportions and meticulously weighted with lead. The Jerkbait differs from more conventional lures because; you have to put the action into the bait to bring it to life. To create this tantalising action, cast out and begin a slow steady retrieve while at the same time stroking the rod tip downwards from waist level towards your feet. The stroke of the rod tip instils a sudden spurt or flutter in the lure, and this start - stop motion sends the pike into a frenzy.

I'm often asked why a jerk bait is more successful than conventional crank baits (plugs). The movement in my opinion is the key to the deadly jerk bait. You only have to look at a dying or distressed fish to see they tend to move in unnatural start - stop movements. I believe the jerk mimics these erratic movements, and triggers the pike to strike.

There are two main styles of Jerkbaits, they are known by many different names, most often they are referred to as 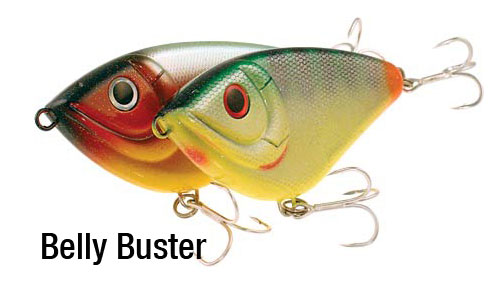 2) Chop, slash or pull baits, like the Squirrley Burt

Each style has its advantages and also its devotees. With so many patterns of Jerkbaits available there are some that are hard to define as they display some characteristics of each type.

The glide bait swings from side to side on the retrieve like an underwater "walk the dog", this style is ideal for searching the water as its wide action not only pulls fish from great distances but also allows you to search water quickly.

The chop, slash or pull baits have an up and down action diving forward and rising upwards to the surface (depending of weighting), their advantage other than catching a lot of pike is that they can safely be fished close to features such as weeds or snags without the danger of gliding into them, sometimes a bait of this style outscores glide baits when the pike are in a lethargic mood.

There are 3 densities in Jerkbaits; this allows you to successfully keep in touch with the pike throughout the year. You need to be able to adapt to the pikes behaviour and habitat, the biggest influence being water temperature.

1) Floating jerkbaits are ideal summer baits, they can be worked fast and shallow, perfect over weeds, and their erratic action is greatest in floating versions. Examples of these are Salmo Sliders and Strike Pro Buster Jerk Shallow lures.

2) Suspending models are perfect for autumn, winter and spring, when cooler water temperatures require slower, or deeper or sometimes a combination of both slower and deeper retrieves. These baits can be fished very slowly as they do not rise to the surface, don't forget to let the bait hang motionless near any drop offs or other features. Examples of these are Ace Fat Flippers or Suspending Pigs.

3) Fast Sinking baits are essential in the winter, the pike will be in the deeper water, usually covered in leeches. You will need a heavily weighted jerkbait to work tight along the bottom to trigger a strike. Examples of these are Llungen Jerko or Savage Gear Deviator ‘Belly Up’ lures.

Jerkbaits are spreading across Britain faster than a forest fire. From the wild western Loughs of Ireland to the legendary Llandegfedd, people are cleaning up, including yours truly, give them a try and be prepared to be amazed!